The peace process has been major news in almost all Arab media before, during and after direct negotiations started between the Palestinians and the Israelis. In broadsheet newspapers it is front page news; in broadcast media it usually comes first or second. The mood of the commentary and analysis was quite ambivalent. For the first time in a few years readers will find a balance between the usually pessimistic crowd of journalists who can’t see any light at the end of the tunnel, and more “moderate” advocates of peace at any expense as the only possible way out of the turmoil of the Palestinian people. Although everyone was skeptical about the possibility of continuing negotiations, this time, even the cynical crowd could show some realism in the engagement of the Palestinians in direct negotiations, for various reasons.

A few days ago, Al-Hayat Al-Jadidah newspaper in Ramallah-the Palestinian Territories ran a poll on the opportunities of success of the negotiations with Israel. 67% of readers voted No, they don’t think they will succeed in their negotiations, 17 % voted Yes and 16% did not know. Previously the majority of the Palestinians and many among the Arabs refused to believe that peace could be achieved and would urge the Palestinian Authority to abandon the process. This time, although the majority of the Palestinians did not have high expectations, they did show hope of achieving progress and getting out of their predicament in order to live normal lives,. 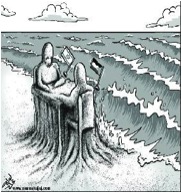 Still, the dominant view in the Arab press framed the peace process as elusive and hard to achieve. Jihad Al-Khazin wrote in Al-Hayat (a Saudi owned newspaper published in London) that the Israeli “reluctance” to halt settlement construction will bring about a “terrorism war with weapons of mass destruction.” Only God knows the end of this war, he insists; negotiating with Israel does not lead anywhere. It is clear, he believes, in the statements made by Avigdor Lieberman and Benjamin Netanyahu regarding their “position on Jerusalem, the Israeli settlements and on borders that there is no room for any sort of agreement”.

Remarkably for the Arab press, criticism of the Palestinian president Mahmoud Abbas has been less vicious than any time since 2007. The man has been given some credit in the media for his strong position on the Israeli settlements in the Palestinian Territories. Both Netanyahu and Lieberman were criticized in the press; particularly the latter who, with his volatile public statements, was seen as more of an enemy of peace. On the other hand, Al-Khazin seems to regard American president Barack Obama as a well-intended man who could not deliver his promises, though he tries hard. “I believe that President Obama is sincere in his pursuit of peace [between the Palestinians and the Israelis],” he notes in Al-Hayat, “though he will fail at the end, due to the fact that the Congress is more Israeli that the Knesset...” 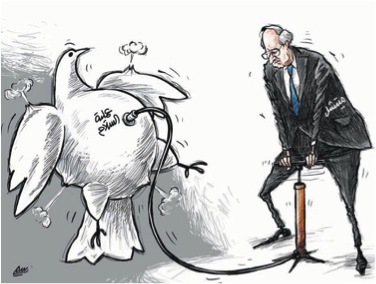 On the same day, Adel Darwish in Al-Sharq Al-Awsat newspaper criticized both the Israeli PM Netanyahu and the Palestinian president Mahmoud Abbas for what he viewed as their “lack of political will to move forward in the negotiations,” and make “brave decisions”. For him Netanyahu can always overcome the possible collapse of his government by forming a coalition with Kadima. In the same article, Darwish argues that Mahmoud Abbas should provide an alternative for the peace negotiations in case they decide to cease them, before “trapping himself in the settlements issue”. Darwish goes on emphasizing that Mahmood Abbas and not other entities or personalities like the Arab League leaders are historically responsible for the future and the interests of the Palestinian people; hence he urged the Palestinian president to take charge and not leave it to some Arab ministers to decide on the negotiations.

This news articles and polls somewhat indicate that the diplomacy being conducted by the U.S, and specifically, President Obama was successful in convincing people across the “Arab street” that good intentions are prevailing. The belief in U.S. political means to get Israel to abide by the international law is still present. However, many people are skeptical about Obama’s political willingness to exert more pressure on Israel.

From the Palestinian point of view, this round of peace talks proved that the image of the PA and President Abbas could and did improve internationally when they choose to participate in the peace talks and “do the right thing”. The challenge of succeeding and improving the Palestinian image as a “peace partner” no longer has to have a negative effect on the power and strength of the Palestinian Authority by the domestic audience.

Abeer Al-Najjar
CPD Blog Contributor
Assistant Professor, Department of Mass Communication, American University of Sharjah
YOU MIGHT BE INTERESTED IN...