Home|MPD in Indonesia: Assalamualaikum (Peace Be Upon You) 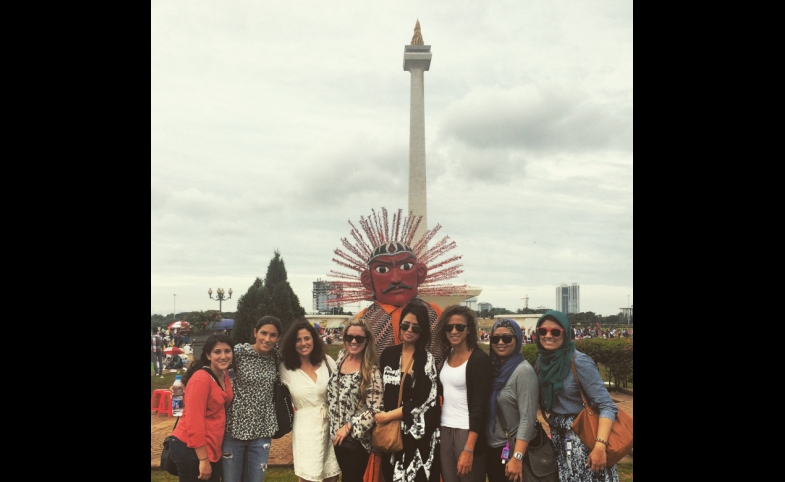 Note from the CPD Blog Manager: This week, the Blog will be featuring dispatches from the USC Master of Public Diplomacy research trip to Indonesia. Learn about the trip here.

Our first full day in Indonesia was as information-packed as a Jakarta traffic jam. After a 7-hour plane from Seoul we arrived at the Soekarno-Hatta International Airport at 2 am Sunday night, a considerably quiet time to arrive. With not much to be seen from the window of our moving van, we were unsure of what to expect the next day except for humidity, jet lag and of course, traffic jams. The day dawned surprisingly bright and cool – as it rained earlier that morning and this helped cool the day down, making the humidity bearable. The light, occasional breeze was pleasantly welcomed as we ventured out to explore and experience Jakarta for ourselves alongside our knowledgeable guide.

Throughout the day we visited a number of cultural sites, from the Museum Nasional to Monument Nasional. Museum Nasional is an archaeological, historical, ethnological and geographical museum, known among the locals as the “Elephant Building” or “Elephant Museum.” This is because located at the front of the museum is a bronze elephant statue gift from Thai King Chulalongkorn (Rama V) who visited the museum in 1871. The Museum itself is under purview of the Ministry of Culture and Tourism with the vision of it being the center of culture and tourism information and also “to increase the pride of civilization and national culture, and to strengthen unity and friendship among nations.” To facilitate the tourism aspect of its function, the Indonesian Heritage Society organizes not only free English tours, it also offers them in French, Japanese and Korean. The museum allowed for tourists to dig deeper into understanding the diverse Indonesian history, culture, ethnicities and languages, with a fascinating ethnology section that includes Dayak puppets and wooden statues from Nias, as well as beautiful textiles.

The Monument Nasional, also known as Monas, is a 132m tower in the center of Merdeka Square, or Freedom Square, symbolizing the fight for Indonesia. The national monument was built as a commemoration of the struggle for independence. The Freedom Square boasted a number of street performers, as well as locals selling different items, ranging from inexpensive knockoff sunglasses to flowing, patterned pants for sale at very inexpensive prices.

Of all the sites we visited, one stood out more than the rest. The Istiqlal Mosque is the largest mosque in Southeast Asia and third largest in the world. The word “istiqlal” is an Arabic word, meaning “independence.” This word can also be associated with “freedom” as the mosque was built to commemorate Indonesian independence.

The Istiqlal Mosque is located next to the Catholic Jakarta Cathedral and the Freedom Square, as part of the then-President Sukarno’s grand vision of a strong, multi-faith state with the government at its center. This was an attempt to show to the world that religions could harmoniously co-exist. To further strengthen this point to the world, the designer of the mosque was a Christian architect from Sumatera named Frederik Silaban, who won the design competition held. The mosque is open to the general public, where tourists can take a tour with a Mosque employee. Though non-Muslims are not allowed in the main prayer hall, they are taken to the upper part of the mosque where they can view the main praying hall, and roam the hallways and terraces flanking the main building.

The U.S.-Indonesia relationship demonstrates the futility of attempting to generalize nations with a single trait in common, in this case Islam, while overlooking their innumerable political, social, economic, and cultural differences.

Opening up the mosque to non-muslims allowed for the mysterious space to be viewed and understood by tourists from other faiths, ethnicities and nations. On February 16, 2014, Secretary of State John Kerry visited the mosque where he was taken on a 20-minute tour of the building accompanied by the Grand Imam Kyai al-Hajj Ali Mustafa Yaqub. President Obama himself visited the mosque in 2010 when he traveled to the archipelago. The Obama administration has worked hard to try and repair relations with the Muslim world, which were badly frayed under the previous administration with the invasion of Iraq in 2003. While walking down the streets of Jakarta, the locals were quick to call out “Obama,” when they found out we were traveling from the U.S. Our guide informed us the public sees Obama as “the Son of Indonesia” – someone who once lived there and would understand their heritage and culture.

Indonesia is the world’s largest archipelago nation, made up of more than 17,000 islands and foreign visitor arrivals to Indonesia rose to 8.8 million in 2013, according to official figures by Statistics Indonesia. The United States and other Western powers have often referred to Indonesia – the world’s third-biggest democracy – as a bridge to the Muslim world. Ninety percent of Indonesia’s 250 million people identify themselves as Muslims, and most practice a moderate form of Islam. Having originated on the Arabian Peninsula during the seventh century, Islam has long been associated with the Middle East. More recently, this association has been strengthened by media coverage after the September 11th 2001 tragedies, which based public discourse concerning Islam upon terrorists’ characterizations of it, so much so that Islam became strongly associated with terrorism. Part of the Bush administration’s “War on Terror” contributed to the association between terrorism and the Middle East. With Islam and the Middle East continually broadcasted in the news in this manner, many people continue to believe that most Muslims are Middle Eastern, a belief that does not hold up to the facts, as reported by the Pew Research Center in 2013.

As the global order is changing, emerging powers are being scrutinized as certain countries are developing into powerful, influential global players, and Indonesia is one of them. It has joined the club of Southeast Asia’s rising “tiger economies” alongside Singapore, Malaysia, and Thailand and is now constituted an economic steam engine in the Asia-Pacific. Located strategically, with large Muslim populations, and transforming into a young democracy, Indonesia has a lot to offer for our research with regards to the evolution of public diplomacy, the narrative of Islam within the context of globalization, modernity and democracy, and its ongoing democratization of foreign policy processes. The U.S.-Indonesia relationship demonstrates the futility of attempting to generalize nations with a single trait in common, in this case Islam, while overlooking their innumerable political, social, economic, and cultural differences. It is time these factors are taken seriously into international dialogue instead of skimming over them. Once this is taken seriously, only then can the complex issues involving Islam and the West can be resolved.