Home|Nationalism & Populism on the Global Stage 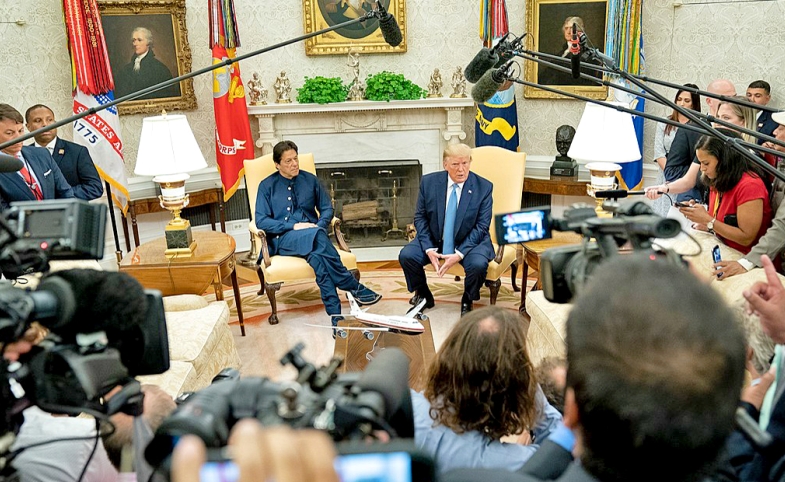 Nationalism & Populism on the Global Stage

When Pakistani Prime Minister Imran Khan met last week on July 22, 2019 with President Donald Trump at the White House, their encounter highlighted how nationalists and populists are ascendant on the global stage, with tens of millions of ordinary people placing vast reserves of trust in their goals, motivations and abilities.

Khan, 66, is more famous for exploits on the cricket field than in the political arena. He has been likened to Trump by people ranging from noted South Asia expert Shamila Chaudhary to late-night personality Trevor Noah, and Sen. Lindsey Graham predicted after meeting Khan months ago, “I think they will hit it off. Similar personalities.”

Some of the comparisons are apt—these are political outsiders who can talk a big game, after all, who have spent decades honing the art of public performances, and who rail against elites. But the comparisons can be taken too far.

Khan has been diligently at work in political life for longer than many realize, patiently surviving many setbacks since the turn of this century, whereas it’s reasonable to suspect that Trump imagined his political turn to be a brief detour that was extended by an unexpected electoral victory.

Khan repudiated his jet-setting, playboy persona years ago, and has been a philanthropist of real consequence for a quarter-century. Unlike Trump, he has dialed down some of his rabble-rousing now that he must bear the mantle of leadership, and has spent political capital in making at least some effort to rein in extremists in his nation (though progressives can justifiably criticize him for losing nerve in such attempts).

And while Trump embodies gold-plated ostentation, Khan flew to Washington by commercial jet, further endearing himself to Pakistani masses who resent past leaders for plundering the national treasury.

Yet for all Trump’s faults, his offer to help mediate the Pakistan-India Kashmiri conflict reflects a level of gut-level understanding that has eluded much of the Western foreign-policy and diplomatic establishment: For Pakistan, it’s always about its larger sibling, India. You can’t get Pakistan to do anything if that anything conflicts in any way with the worries that the ordinary Pakistani citizen has about how the nation from which it sprang intends to subjugate it.

Many international-relations and PD experts from the West swoop into Pakistan for a few days, have a few meetings and dinners, and go on to declare that the obsession with India is a phenomenon that the military manipulates to maintain its power. That exaggerates the matter. If AQ Khan, the father of the Pakistani nuclear program, is hailed on the street as a hero of the highest order (and he is), it’s because average people there believe that their nuclear capacity keeps India from steamrollering them. The military appears more in touch with that sentiment than the indigenous sophisticates that the Western experts dine with.

Further, sometimes paranoia isn’t the most irrational option, given the startling rise of Hindu nationalism next door. As elections loomed in India this past spring, the Economist observed that Indian Prime Minister Narendra Modi’s “strident brand of Hindu nationalism, which pictures Pakistan less as a strategic opponent than a threat to civilisation, puts him at the fringe even of his own Bharatiya Janata Party.”

So perhaps a little outside refereeing, which Trump is willing to provide regarding the disputed territories of Kashmir, could do some good—if India were to cooperate, which it has for years insisted it won’t.

The inability of anyone to confirm Trump’s claim that Modi requested his mediating services further casts Trump’s potential helpfulness into question. Still, give him credit for seeing the larger issues driving South Asian geopolitics.

His predecessor Barack Obama mismanaged engagement with the region early in his presidency, first by creating a myopic Af-Pak prism through which he viewed and addressed South-Asian conflict. He installed as his Af-Pak emissary the gifted diplomat Richard Holbrooke, who died in 2011. New York Times writer Nicholas Kristof shared posthumously Holbrooke’s private candor about his mission:

As for Pakistan, Holbrooke told me and others that because of its size and nuclear weaponry, it was center stage; Afghanistan was a sideshow.

“A stable Afghanistan is not essential; a stable Pakistan is essential,” he noted, in the musings he left behind. He believed that a crucial step to reducing radicalism in Pakistan was to ease the Kashmir dispute with India, and he favored more pressure on India to achieve that.

Holbrooke was frustrated by Islamabad’s duplicity. But he also realized that Pakistan sheltered the Afghan Taliban because it distrusted the United States, particularly after the United States walked away in 1989 after the Soviet pullout from Afghanistan. And renewed threats of abandonment won’t build trust.

As Foreign Policy noted, India resisted his efforts to get involved, just as it seems to be bristling against Trump’s current desire to get involved. There seemed to be no repercussions for Indian obstinacy, and many Pakistanis felt Obama soon kicked their nation to the curb in an explicit choice to woo India as a strategic partner instead.

Bringing nuclear-armed rivals Pakistan and India into more cooperative and symbiotic roles would be one of the greatest achievements in world affairs, at both a symbolic and practical level. Can Trump do here, through force of personality, what Obama couldn’t? And can Khan inspire Trump to keep his shoulder to that wheel, given his erratic, back and forth approach to US-Pakistani relations thus far?

The process of history is mostly about larger forces at work. But even impersonal history finds inflection points in the form of personal loyalties and bonds. In the Trump era, this appears doubly true.

Some Americans are wondering how we’ll be able to explain Donald Trump to the rest of the world, but they needn’t worry. Trump will be an all-too-familiar character in many countries because they already have their own...