Home|Public Diplomacy in the aftermath of Typhoon Haiyan 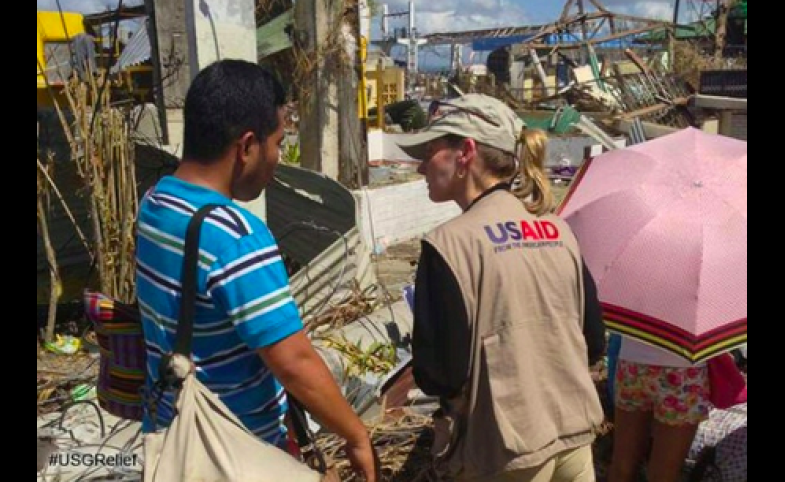 Public Diplomacy in the aftermath of Typhoon Haiyan

Public diplomacy (PD), if defined as the act of a government engaging directly with a foreign public, then many governments are currently conducting PD towards the Filipino public in the aftermath of Typhoon Haiyan's devastation. Most public diplomacy scholars and practitioners refer to the foreign aid assistance in the wake of a disaster as "aid diplomacy." This aid diplomacy is often spoken about in terms of foreign aid packages, goodwill gestures, and how foreign aid can help to increase a public's positive attitudes towards the aid-providing country. When it comes to foreign aid, these packages are usually seen as drivers of goodwill and the implementation of a nation's soft power, but we must acknowledge that economic incentives are generally considered a coercive tool of hard power. It is important to remember that public diplomacy experts understand that PD is not a strategy of merely goodwill and smiles, but a national interest driven foreign policy strategy. Therefore, we should look at aid diplomacy with a discerning lens, and make assessments based on direct impact.

While it has been demonstrated in the aftermath of the nuclear disaster in Japan, and after the earthquake in Pakistan, that public opinion towards the U.S., for example, after the delivery of foreign aid is correlated with rising positive attitudes toward the United States. However, is it the amount of financial aid that helps to create positive sentiments after these disasters, or is it something else?

Could it be that the on-the-ground presence of people, diplomats, aid and rescue workers, foreign medical teams, or branded-food, shelter, and clothing supplies, make the greatest public diplomacy impact? With 5,670 dead, 1,761 missing, 26,322 injured and 11.2 million people affected, of which 4.1 million are currently displaced, what does the aid diplomacy look like for the Filipino people affected by Typhoon Haiyan? 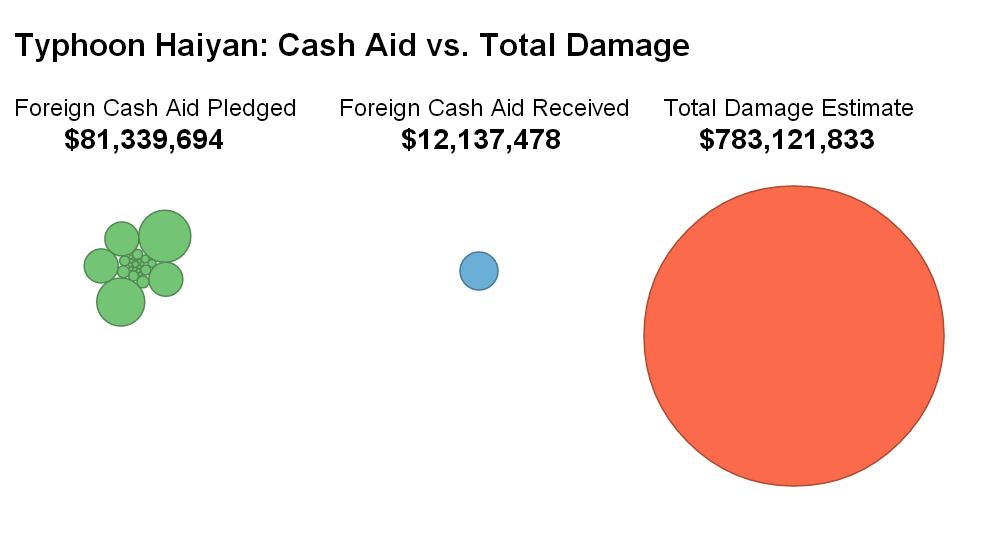 See Vizynary for more information about this graphic.

Foreign aid packages to the Philippines, according to the latest report issued on December 2 by the Foreign Aid Transparency Hub (FAiTH) notes that while $504 million has been pledged by 49 countries including the Vatican, the European Union, as well as a number of multilateral organizations and international NGOs (excluding the UN), only $12 million has been disbursed.

In a disaster, where immediate relief is needed, the large majority of foreign aid is tangled in the bureaucratic distribution process and isn't helping the people. So, what is impacting the public? It's not the inaccessible $492 million pledged to the Philippines. So is there significant aid diplomacy currently being conducted?

Well, let's take a look at the on-the-ground relief efforts being conducted in the immediate aftermath of the super typhoon. According to the Philippines government report "National Diaster Risk Reduction and Management Council (NDRRMC)," a total of 25 countries are currently in the Philippines providing medical and humanitarian relief.

56 Countries Providing Relief to the Philippines

Of these 25 countries, only China, Japan, and South Korea are providing financial, medical, and humanitarian aid. Only Western countries, with the exception of Malaysia, contributed both foreign aid and on-the-ground medical teams including Australia, Belgium, Canada, Germany, Italy, the Netherlands, Norway, Spain, Switzerland, the United Kingdom, and the United States. Indonesia, Singapore, and Taiwan are the only countries providing both foreign aid and humanitarian goods. While an interesting grouping of countries, Israel, Russia, South Africa, and Turkey, only committed medical assistance. India and Qatar provided only humanitarian goods, while France was the only country to not provide financial aid, but sent medical teams and humanitarian goods.*

So to answer the questions raised above, yes, aid diplomacy is being conducted in the Philippines, but it is done so by the few thousand people on the ground who are providing medical assistance, clean water, food, shelter, and other basic necessities. These 25 countries that chose to send goods and people are the aid diplomacy heroes to the Filipino people, regardless of the amount of money they pledged to the government of the Philippines. While the millions pledged will be a necessity down the line for reconstruction, it is not what drives the immediate public impact.

Based on the understanding that public diplomacy must directly impact the public, and circumvent the government-to-government relationship, public diplomacy scholars and practitioners should not be considering foreign aid a direct PD tool. However, on-the-ground assistance must take center-stage as the defining component of aid diplomacy.

*Please note, this piece is only tackling the public diplomacy of traditional government agencies which are not the only actors participating in the immediate medical and humanitarian relief. There are 18 UN agencies and 138 international NGOs doing so as well, and they are working alongside a total of 94 foreign medical teams.

Below is a list of articles which feature on-the-ground rescue stories in which foreign assistance teams provided immediate relief to Filipinos in need.

CANADA
Canada to Match Donations Made By its Citizens to Typhoon Victims
The Philippine Star
November 12, 2013

Super Typhoon Haiyan and Public Diplomacy of the Deed

APDS Blogger: Shannon Haugh America has put our money where our mouth is, our boots on the ground and our hands in the air like we just do care. -Stephen Colbert, American Political Satirist and TV host. On...

Philippines: How Can the World be Kept Engaged After Typhoon Haiyan Disappears from the News?

On November, 8 2013, Super typhoon Haiyan, the strongest storm ever recorded, destroyed an area as big as Belgium and affected the lives of 14 million people in the central islands of the Philippines. Immediately...