Home|Super Typhoon Haiyan and Public Diplomacy of the Deed 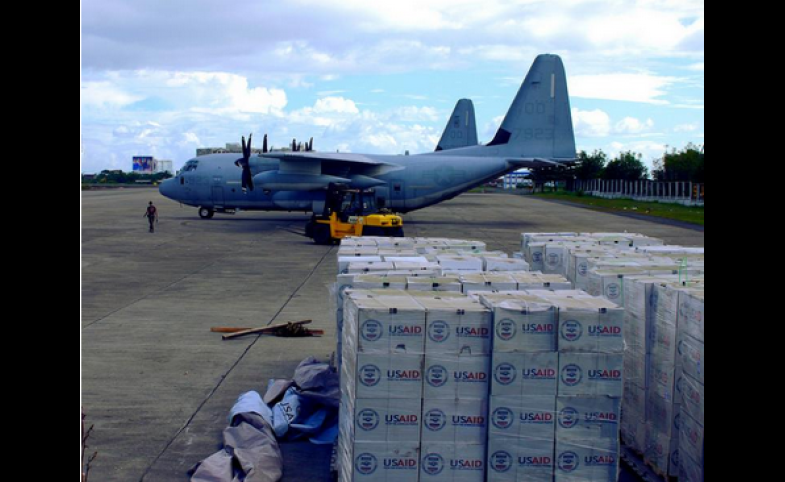 Super Typhoon Haiyan and Public Diplomacy of the Deed

America has put our money where our mouth is, our boots on the ground and our hands in the air like we just do care.
-Stephen Colbert, American Political Satirist and TV host.

On November 8, 2013, Super Typhoon Haiyan ravished the Philippine archipelago. With 195 MPH winds and gusts of up to 230 MPH, the typhoon killed an estimated 4,000 people and displaced another 670,000. Across the southern part of the Philippines and especially in Tacloban, the city most affected by the typhoon, the scene is apocalyptic. Power lines are tangled and have drowned in the floods, tin roofs scatter the grounds, and corpses are ubiquitous. In the heat of this moment of crisis, international aid is flowing to the Philippines from across the world. Off the coast of the Philippines, the U.S.S. George Washington aircraft carrier arrived with a crew of 5,000 and 21 helicopters to aid with search and rescue and transport relief supplies into the hard to reach areas. The Japanese have also arrived with their Self Defense Force. A local Philippine news source reported that throughout the disaster zone, there are many “nations, cultures and flags” including the French, the Japanese, the Turkish, and Doctors Without Borders. The response from these various countries illustrates international cooperation and countries “doing the right thing.” However, missing in action is the region’s giant, China who only initially donated $100,000. Why is China so unsympathetic to the Philippines and how does crisis relief and humanitarian assistance reflect current bilateral relationships? In the first part of this post, I discuss why China is behaving coldly towards the Philippines. Then, I argue that China’s harsh response is a missed opportunity to warm tense relations with the Philippines and to reverse its aggressive and hostile image in the region.

The Philippines and China: A Tense Relationship

China’s response to the super typhoon in the Philippines reflects the tense history between the two counties over the last several decades. By 1995, the Chinese had occupied and built a wooden stronghold on Mischief Reef, a small atoll within the Philippines Exclusive Economic Zone (EEZ), just 130 miles west of Palawan Island. This marked a flashpoint in Sino-Philippine relations and “negatively colored Philippine perceptions of China.”[1] For many, Mischief Reef was a “possible precursor of China’s hegemonic ambitions in Asia.”[2] However, in the late 1990’s the perception of China among the Philippines and several other countries in the Southeast Asian region began to shift from a security threat to one of economic opportunity. Part of this change in attitude grew out of the financial support China provided to its neighbors during the Asian Financial Crisis. This period was marked with “high-level leadership exchanges, the promotion of trade and investment, and the expansion of security and defense cooperation” between China and the Philippines.[3]

The ‘golden age’ in Sino-Philippines and Sino-ASEAN relations was short-lived. As China’s economy grew, so did its military and its aggression in the South China Sea. China’s military aggression has raised concerns amongst Southeast Asian countries, forcing them to reconsider their positive perception of China as an economic partner. The situation escalated last year at Scarborough Shoal when the Chinese maritime agencies prevented the Philippine Navy from entering Scarborough Shoal and arrested Chinese fishermen who were allegedly fishing illegally. At the end of last year, China informed the Philippines that it planned to station the ships at Scarborough Shoals permanently. Philippine Foreign Affairs Secretary, Albert del Rosario, describes Beijing’s behavior as “dictatorial”.

In January 2013, the Philippine foreign minister notified the Chinese Embassy in Manila of its intention to take China to the United Nations international courts. The Philippines has been the most vocal country in Asia and the first country to take a legal stance against China. The tense Sino-Philippine relations clearly set the tone of China’s relief efforts to Philippines in the wake of Typhoon Haiyan.

China missed the early opportunity to build personal connections with the affected people, form partnerships, and participate in an international effort to relieve human suffering. Polls suggest that relief assistance can directly improve the image of a country. At the Brooking Institute Conference on Humanitarian Relief and Public Diplomacy, Kristin Lord, a nonresident fellow pointed out that after the United States provided aid to the victims of the 2004 tsunami in Indonesia, the percentage of Indonesians who held a favorable view of the United States increased from 15% to 38%. Similarly, relief assistance in Pakistan improved the view of the United States from 21% in 2004 to 27% in 2006. According to polls, 63% of Indonesians and 78% of Pakistanis surveyed said their view of the United States became more favorable as direct result of American assistance. China missed this crucial window to gain favorability with Filipinos, who are currently proceeding with a court case against China.

China’s lack of action in a highly visible event also hurt its image around the world. International crises are critical moments when the international community works in cooperation towards a common goal. In the heat of international media criticism, China has increased its original donation of $100,000 to $1.6 million in relief goods. This is still only a small percentage of what others have given. Australia has provided $30 million, the European Commission donated $11 million, Japan gave $50 million, the United States contributed $37 million, and South Korea supplied $5 million. On Tuesday, November 19, 11 days after the typhoon hit the Philippines China announced that it would send the Peace Ark hospital ship. Is this too little too late?

Disaster aid sends a message to the world. It demonstrates that a country cares about humanitarian suffering and the real and immediate needs of people, regardless of where they reside. China’s unsympathetic response communicates to the world, that despite having the second largest economy in the world, it is not willing to relinquish its political issues to help a neighbor in the biggest typhoon in recorded history. As China continues to rise, it needs to do so with grace and integrity, illustrating the willingness to follow international norms. Leadership means relating to people, earning their trust, and offering solutions people can understand. The typhoon presented China with the opportunity to demonstrate that in times of crisis, it will do what is right, not what is political. And what is right is often also sensible for policy.

As John F. Kennedy once recognized, “When written in Chinese, the word crisis is composed of two characters- one represents danger, and the other opportunity.” To date, China’s action, or lack of action, resembles the danger character more than the opportunity character. The typhoon crisis shows the importance of addressing suffering with empathy and compassion in a timely fashion. Key to public diplomacy is engaging and listening. This is the moment for China to do both of these things. Will Chinese leaders be able turn the ship around?

Shannon Haugh is a second year Master of Public Diplomacy student at the University of Southern California. She is the current Editor-In-Chief of Public Diplomacy Magazine and the recipient of the Foreign Language and Area Studies Fellowship. Shannon’s experience growing up in the Philippines speaking English and Japanese has shaped her interests in East Asian relations, international development, nation branding, people to people public diplomacy, human rights, and ICT. Before coming to USC, Shannon worked for various Japanese companies in the Los Angeles area. Recently, Shannon spent the summer in Cape Town, South Africa doing paralegal work for refugees. Shannon also supported the State Department during President Obama’s visit to South Africa.