Home|MPD in China 2013: The Domestic Question of PD and the MFA

MPD in China 2013: The Domestic Question of PD and the MFA

In an earlier post, I detailed the USC Annenberg MPD delegation’s meeting with PD officials from the Ministry of Foreign Affairs (MFA) in Beijing. The outcome of that meeting raised interesting questions about MFA’s role in PD and about the domestic dimension of China’s PD, which we tried to learn more about through our meetings. In this piece, I will provide my own interpretation of what we learned here.

From all the facts that my American professor of Chinese Foreign Policy tried to ‘brainwash’ me with, one stood out, namely, that the MFA has never been a sole player in Chinese foreign affairs, and other actors are constantly eroding its power. PD is no exception. Although MFA set up its Public Diplomacy Division as early as 2004, and upgraded it into the Public Diplomacy Office in late 2009, its annual budget as of 2009 was around $160,000. (Forgive me for quoting a foreign source for the figure, but it becomes necessary from time to time when Chinese entities are concerned.) Moreover, its intended audience had been all along identified as domestic. As the only PD-related department within MFA, it is embededunder the Information Department (until five months ago when it was upgraded again into Public Diplomacy Office directly under MFA) indicates something. The primary responsibility of the Information Department is to release information on China's major diplomatic events via the management of press coverage. In other words, informing, instead of engagement, is expectedly the focus of any PD work conducted by the Office. In the meanwhile, since the Department is itself parallel to other departments including that of Policy Planning, Regional Affairs, and Consular Affairs, it is reasonable to doubt how efficiently the Office has played a coordinative, if not supervisory, role for government-related PD programs even within MFA, let alone among other actors who are aggressively involving themselves in public diplomacy, such as the Chinese People’s Political Consultative Conference (CPPCC) Committee of Foreign Affairs, the Ministry of Education, and the Ministry of Commerce, to name only the influential few. As confirmed by the representative from the Public Diplomacy Office, conferences, irregular though they happen, represent the major medium for the Office to connect with stakeholders. Yet, she could not confidently verify how competent the Office in particular, and MFA as a whole, has been in aligning the interests and practices of the non-MFA actors. Corporate diplomacy, for instance, was almost beyond the reach of MFA, although they acknowledge its importance.

What should the domestic public be educated for?

To my relief, our civil servants at the MFA know about the most critical component of public diplomacy: listening. At the end of our meeting, they asked us—to be more accurate, they asked the American students within the delegation—about their opinions on China and through which channels such opinions were formed. My American classmates gave a rather PD reply: people, especially Chinese students around them. But I was thinking to myself in the same time how the past 17 months’ overseas study had changed my opinions about my own country, a change largely attributed to the wider exposure to information. There is a wealth of western literature on China, most of which was unavailable in China when I attended university and most of which depicts a totally different China from what the domestic education and life experience have presented to me. Such a contrast saddens me not because the newly accessed information shakes my confidence in my country, but because of the regret that I should have known it earlier. Yes, ironically, there is so much I do not know about my own country. In the early class discussions, I felt as if I should be the spokesperson for my people (a Chinese-unique mentality, perhaps, this sensitivity to nationality?) because the others just do not know about us. It took me not much time to realize I had better shut up because I did not know anything that our government does not want the domestic public to know whereas the rest of world does.

Political calculus makes limited access to information understandable, but not justifiable or workable today. As my personal case illustrates, barring people from the whole picture might even function counteractively against its purpose: I become silent as a potential public diplomat, fearing my arguments might only be the “trees” rather than the “woods”. Strangely, however, I turn out to be more sympathetic to my government despite the knowledge of its flaws and evils. To err is human. Government, made up of humans, understandably makes mistakes. But it’s much better to know about the mistakes and find solutions than to deny the mistakes and pretend nothing goes wrong. In other words, exposure to information, negative and positive alike, could make people more patriotic and less nationalistic.

If the Chinese public needs to be educated for national policy, which is the oft-quoted explanation for the domestic dimension of China’s PD, then how about providing us with more facts about the country, past and present, grace and disgrace, so that we could figure out the truths ourselves with a Chinese heart, and tell the world in a more confident way (since we are more informed) who we really are?

At the end of the formal meeting, I chatted a bit in my mother tongue with our hosts. Partly due to courtesy and partly to sincerity, they invited us, the Chinese students, to join them one day for the development of Chinese public diplomacy. A hundred percent sincere response from me was: “I’d love to”. The ambitious and high profile practices of China’s public diplomacy are a mixed blessing. The great benefit of a highly centralized government is efficiency: once it puts its heart into something, the whole society can be easily mobilized into the same direction. Yet what if the direction is wrong in the first place? For me, China’s PD development should be another case of “crossing the river by feeling the stone”. Since it’s experimental, it’s reasonable to take cautious steps and pay close heed, so that even if it turns out to be a wrong direction, we still have the opportunity for redirection or a Plan B. 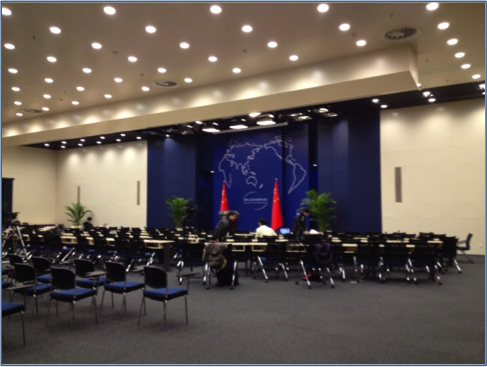 Leaving the conference room after an hour, we got a peek at the Blue Hall, where the regular press conference is held every weekday. The Hall looked exactly the same as it appeared on the TV news, only it was then a part of the reality and much more approachable without journalists and spokespeople. My confusion was not dispelled by the MFA conversation. But one thing appeared clear—public diplomacy is just like the Blue Hall without press conference: part of real life and approachable to the point of becoming loveable.

Danni Li is a graduate student pursuing a Master's degree in Public Diplomacy from the USC Annenberg School for Communication & Journalism.