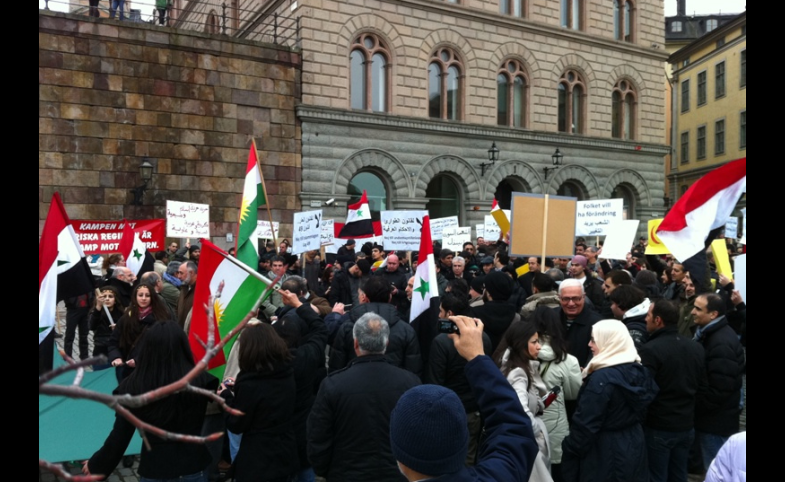 Here’s some news that will probably get buried amid the debates on Syria in the House of Representatives today. The Swedish Migration Board earlier announced that all Syrian refugees will be granted permanent residence. This means that the 8,000 Syrians who have currently been granted asylum on a temporary basis, together with any of the millions of currently displaced Syrians who can make it to Sweden, will be able to settle there and bring their families. While other countries are bickering over whether to intervene with force, Sweden is the only country in the European Union to simply do the right thing, quietly and decisively.

Why is this interesting from a public diplomacy perspective? Last year, Sweden developed a new PD strategy in which aid is a key component. Yet, when I dug around looking for examples of what this meant in practice, there was a degree of uncertainty within PD circles. Swedish PD has had a trade remit for the past eight years or so, as you might expect for a small, exporting country. The aid organization SIDA has its own communications setup and isn’t on the national promotional board. The Migration Board works mainly to the domestic public. The parts of the foreign ministry that deal with aid and communication are in separate buildings and don’t work together on aid-related PD. Basically, things aren’t set up for aid to be a central component of PD.

But Sweden is also one of the most generous countries in the world, giving 0.99% of GNI as aid. By comparison, the United States gives 0.19%, although obviously the levels of cash donated are astronomically higher. The point, though, is that Sweden gives more of what it has than all other countries in the world (bar the tiny tax haven of Luxembourg). No wonder they want to better communicate that.

Sweden’s bold stance on Syria – besides being the right thing – is a reputational masterstroke. It tells the world that the choice isn’t just between military action and inaction, but that there are alternatives based around compassion. It doesn’t seek revenge on a corrupt regime, and the risk associated with violent intervention, but rather invites the victims of atrocities into a safe shelter, and offers them the possibility to build a new future. This isn’t the time to discuss the problems with Sweden’s integration policies (there are plenty), nor to go into the other risks (such as security and human trafficking). The point is this: Sweden is providing a genuine alternative to the Anglo-American debates of this week and last, and it’s doing so in a way consistent with its brand and its aims for national promotion.

I spoke in a previous blog posting about how we need alternative metrics to money and power. Doing the right thing, helping in a time of profound need, offering a future – these are all intangible when compared to trade and investment figures, but there importance is not diminished as a result. This is an example of a third metric at work.

Nonetheless, Sweden needs to get better at getting the political messages across. For decades, neutrality was famously a mainstay of Swedish diplomacy. So was silence. In my opinion, there remains the persistent belief among the older generation of Swedish diplomats that diplomatic integrity and public communication are mutually exclusive; you can’t be a trustworthy partner if you are engaging in public debates at the same time as secret discussions. The rise of PD during the past decade was a compromise hinging on the perceived need to push trade objectives, and there was far less political advocacy or diplomatic public communication taking place than perhaps seemed. I’ve no doubt that Sweden’s Syria policy has been shared with allies behind closed doors, but shouldn’t they have used public diplomacy methods to attempt to influence the terms of debate in Britain, France, and the U.S.? Isn’t this something to advocate to other European publics, as well as to governments? Yet, I find no mention of this story in the rather unscientific sample of news sources I just looked through, outside of the Swedish press.

Sweden likes to assume the role of honest broker, but this often comes at the cost of its ability to advocate specific points of policy directly to foreign publics. Its stance on Syria demonstrates that there is a role for it to play in public debates around the world. Shifts in its PD policy suggest that this could all come together in progressive, caring, authentic, open, and innovative ways (as the brand values assure us). The case of Syria, perhaps more than any other in recent years, demonstrates that Sweden must complement its quiet diplomacy and clever branding with public diplomacy.

Today is World Humanitarian Day. A day highlighting the world’s commitment to support people affected by crisis. It is also the day we recognize individuals who have made outstanding humanitarian contributions. Over...