Home|Boris Diplomacy, or What Does Brexit Mean for British PD? 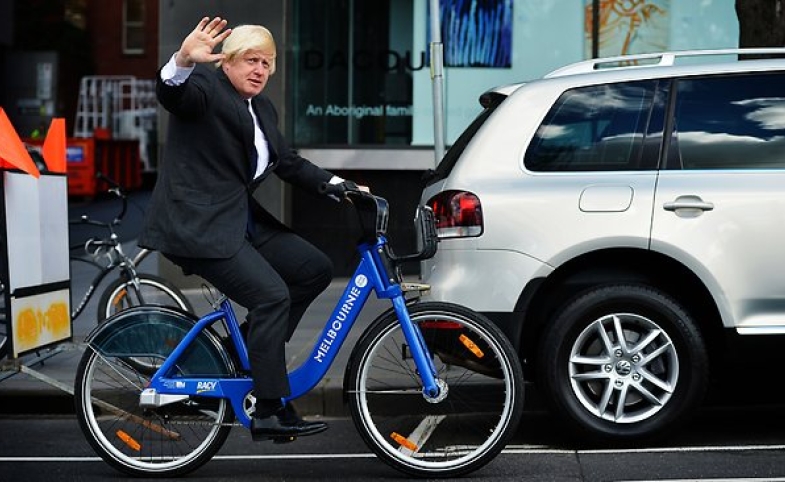 The 2012 image of Britain’s new Foreign Secretary, Boris Johnson, waving the Union Jack while haplessly snagged on a zipline above London, seems an apt image for the situation he has inherited, and indeed played a major part in creating. While the political fallout of Brexit has been covered in previous entries on the CPD blog (here, here, and here), this piece is limited to considering the implications of “Boris Diplomacy” for British public diplomacy and soft power.

Fortunately for the UK, its diplomats haven’t suddenly lost their ability to analyze, persuade, and schmooze. For them, it will be business as usual, and they will quickly become as adept at deflecting Brexit and Boris jibes as U.S. diplomats are about the presidential candidacy race. I expect the GREAT campaign to remain the flagship brand for British business, investment, tourism and education, not least because budgetary constraints would make creating an alternative unlikely. Boris has tended to drape himself in nationalistic iconography and the new Chancellor, Philip Hammond, will have an excellent sense of the global economy from his time as Defence Secretary and Foreign Secretary. Therefore, Treasury influence over the FCO will continue, and if the economy shrinks as anticipated, resources will become tighter and trends towards the monetization of diplomacy will continue. Earlier this year, the FCO put out a tender for a study of the economic value of diplomacy to the UK. This kind of new public management logic has taken root, and the GREAT approach to public diplomacy, which I have discussed in detail elsewhere, thrives in this context.

GREAT tells the world that Britain is open for business, and it does this while cleverly negotiating the tensions between elite and pop culture, heritage and the present, and the ideological and commercial. Since its launch in 2012, the GREAT brand has accompanied a great deal of official development assistance, in the belief that targeted aid spending in medium-income developing countries will generate commercial opportunities in emerging markets. This is part of a soft power strategy designed to “convert” diplomatic and image resources into economic outcomes, with aid increasingly coordinated with diplomatic activity. This intersection of aid and diplomacy is unlikely to go away until there is a change in government, but its relationship to the changed context of Brexit deserves further thought.

The major strategic problem that British diplomacy faces is that all its energy and resources will now be focused on securing the best possible exit deal with the EU, and new deals with the wider world.

The FCO’s spending has been increasingly supplemented by aid funding over the past six years, and is anticipated to reach as much as 70% in 2020. This belies the fact that the UK continues to do a great deal of collaboration, capacity building and assistance work around the world. For example, the FCO has been a world leader on governmental transparency, climate change and ending sexual violence in conflict in recent years. Things that benefit the global commons, as Simon Anholt’s Good Country Index calls it; resources that Britain generates in abundance through its civil society as well as government, and will continue to produce regardless of the political party in power or the results of the recent referendum.

The major strategic problem that British diplomacy faces is that all its energy and resources will now be focused on securing the best possible exit deal with the EU, and new deals with the wider world. This means that many of the diplomatic bargaining chips the UK possesses will be used to influence the structure of Britain’s future foreign relations, rather than individual policy issues. The temptation for the FCO will be to try to make more bargaining chips by leveraging these contributions to the global commons. At its worst, this means threatening to withdraw expertise and resources from sensitive global problems; at its best, it means shaping complex coalitions of stakeholders so as to structure the international environment in desirable ways.

The conundrum at the heart of Boris diplomacy is whether the FCO continues to use its vast resources of goodwill, collaboration and assistance to generate immediate economic returns by reducing its overseas activity and concentrating on the GREAT public diplomacy platform, or whether it looks to leverage those activities in a manner more attuned to the understanding of public diplomacy as a partnership. In other words, Boris will have to make a careful choice between converting these partnerships to their simple economic value, or leveraging them into goodwill and reputational outcomes that may lead to more bargaining chips and more structural advantages for the Brexit negotiations. It is a choice between serving a narrow economic agenda aimed at keeping his political party in power, and longer-term efforts to shape a mutually beneficial global structure.

Such is the bullish nature of the modern British diplomat that they would probably claim to do both at the same time. British diplomats exert a fantastic amount of influence over foreign societies and governments through the multitude of networks and partnerships they participate in, and Brexit will not instantly negate this. But how this influence is used to create additional value for the UK, via public diplomacy and soft power strategies, is a far more sensitive question. While GREAT has raised the bar for economic public diplomacy, and has proven to be remarkably malleable for use in a variety of circumstances, it is not an appropriate face for the diplomatic and civil society work that seeks to influence foreign societies and governments through partnerships. For this, there is a need for a distinct public diplomacy strategy that puts business, NGOs, think tanks, academia and other cosmopolitan forces at the forefront of an international presence oriented around shaping a mutually beneficial global structure. The FCO needs to be part of it; however, I can’t help but feel that the stage is set for the British Council to show its mettle.

For the full story of how British public diplomacy reached this point, look out for my new book, British Public Diplomacy and Soft Power: Diplomatic Influence and the Digital Revolution (Palgrave Studies in Diplomacy and International Relations), due out later this year.

An Al Jazeera undercover reporter has caught Israeli embassy employee Shai Masot plotting to bring down a British foreign office minister who is seen as too pro-Palestinian. Shai Masot also appears to boast about influencing...