How do you perform public diplomacy effectively in the Age of Drama Queens?

It’s a special challenge if you’re Judith McHale, the State Department’s new Undersecretary for Public Diplomacy, with a special charge to rebuild America’s image in the Muslim world, especially in places such as Pakistan.

I sat in on a meeting in early August in which a successful Pakistani businessman assured Undersecretary McHale, who was about to make her first visit to Pakistan, that she would find the majority of Pakistan’s population to be moderate and friendly, despite what all the polling data says.

McHale went on to meet with a range of Pakistani leaders and civilians, including Pakistani journalist and drama queen Ansar Abbasi.  As the New York Times reported:

After Ms. McHale, the Obama administration’s new under secretary of state for public diplomacy and public affairs, gave her initial polite presentation about building bridges between America and the Muslim world, Mr. Abbasi thanked her politely for meeting with him. Then he told her that he hated her.

"‘You should know that we hate all Americans,’ ” Ms. McHale said Mr. Abbasi told her. “‘From the bottom of our souls, we hate you.’”

No, Mr. Abbasi. Thank you for your time.

McHale’s willingness to meet with openly anti-American politicians and journalists such as Abbasi (who applauds Iranian President Mahmoud Ahmedinejad as the exemplar for a Muslim leader) shows she is bold enough to tap a beehive in search of honey.

Yet I found myself pondering the vast difference in perspective the businessman and the journalist shared with McHale about Pakistani sentiment.

The amateur psychologist within me finds Pakistani society on the whole to be a bit bipolar. (Bear in mind, I say this with all due clinical non-judgmentalism). As that nuclear-armed, poverty-smitten nation hovers on the brink, its populace swings wildly between outlandish, outsized expressions of rage and despair on one end, and on the other end soothing if disingenuous assurances that life in Pakistan, like a work of modern art, is better than it looks. Pakistanis are one part drama queen and one part publicist—and are prone to near-hysterical exaggeration in both regards.

America and the West on balance aspire toward candor, forthrightness and modesty in their communications, in relative terms. Americans’ crap detectors are set for a lower threshold. Pakistanis tend toward a style that could be perceived in the West as posturing, blustery and lacking in nuance.

Consider some unedited examples below from PakistaniLeaders.com, beginning with the page for Ansar Abbasi himself:

Being a popular name in journalism today, he has a lot to do with the tomorrow of print media of Pakistan as well; and to talk of the past, Ansar has really established himself as an accredited name. So, he has covered a tough past, has shined out as a glittering star in the present, and holds a promising future waiting for him. Few are blessed with the kind of success Ansar has been blessed with.

With those kinds of credentials, I suppose I’d run around telling people I hate them too.

Take too the site’s listing for Sadruddin Hashwani, a billionaire who built a hotel empire in Pakistan, which concludes thusly:

Indeed. As you begin to see, posturing and exaggeration are all part of the theatre of being Pakistani. Consider the case of Pakistani President Zardari, a man who not long ago argued he was mentally unfit to stand trial for corruption in England. His PakistanLeaders.com page spins the matter thusly:

Having spent a great deal of time in jails and detention on account of politically motivated trials, Asif Zardari has probably gathered what it takes to be a resilient political worker. Currently, assisting his son ‘Bilawal Bhutto Zardari’ to help manage the affairs of Pakistan Peoples’ Party, he is indeed a major political figure today.

Repeated arrests and detentions have made him a controversial political figure. However, his spirits are high and in spite of his deteriorated health owing to the agonies of imprisonment, he is agile and active and committed to the cause of democracy. …. He has wide-ranging interests and loves horses among the animals.

The term “probably” is an unusual qualifier in the second sentence of the passage above, showing rare hedging and modesty. But for the most part there is little subtlety in Pakistan. Look at the country’s ostentatiously decorated buses (see below) and homes and clothing and jewelry, and you will encounter a riot of colors and sparkles. Their food is not mild: their savories are howlingly spicy, their indigenous desserts are shockingly sweet. When they paint, they paint in the most vivid tones, and so it is when they speak: Within interpersonal communication, tongues are hammers and words are nails, and each sentence is an expression of cosmic stakes.

As you’d expect, Pakistanis who have grown up in the West tend to be so different in their style of communication and even thought, that they often are at wit’s end in dealing with kinfolk, bureaucrats and media from the motherland. My own relationship with my late father, a proud, naturalized American who came here 53 years ago, often captured this.

After 9/11, if my friends would mention to him their concern that Pakistan harbored many who would seek to destroy the West, he always comforted them by stressing that “a very, very tiny number of people – maybe .001% of the population – supports these extremists.”

Later, in a private moment, he would fret about how fellow Pakistanis weren’t giving enough financial support to a school he founded in his hometown village to offer an anti-extremist education to local children. “How can we keep Pakistan from being destroyed by the extremists if we don’t offer children good schools?” he would ask darkly.

“But you said we only had .001% crazy people over there, so it can’t be that bad, right?” I would ask in return. (Sarcasm, incidentally, doesn’t translate across cultures.)

At times when I resisted my father’s instruction in life, he showed a mastery of Drama Queen Theatre, once deriding me as “the second-worst man alive—behind Salman Rushdie.”

Such performances both stung me and amused me.Yet other family members would hasten to add that his words were an expression of passion rather than dislike: A betrayed father or mother or lover or friend speaks in angrier terms than does a detached observer—especially in Pakistan.

That gets back to the difficult matters facing McHale and the Obama administration as they attempt to extend the steady hand of fellowship while dodging verbal bullets.

They will have to bear in mind that Pakistanis’ recent expressions of disgust toward the U.S. are real but also paper-thin. Those feelings represent a sense of betrayal that will not disappear overnight, but which is not necessarily permanent.

But Pakistanis also have their own challenge in moving from public drama to public diplomacy. Too much angry posturing by Pakistanis may not have the intended effect. Jimmy Carter came to office with irenic goals and ideals, and became a “born-again Cold Warrior” by the end of his term, as some experts described his reaction to oversteps by the Soviets.

The old joke goes: What do you call a Democrat who’s been mugged? A Republican.

Pakistan’s verbal muggers may need encouragement from their fellow citizens to tone it down, as American officials offer to help pull Pakistanis out of a hole that most will admit (in their more candid moments) is their own doing.

Below: Pakistani culture isn’t characterized by nuance in colors, costumes or communication. 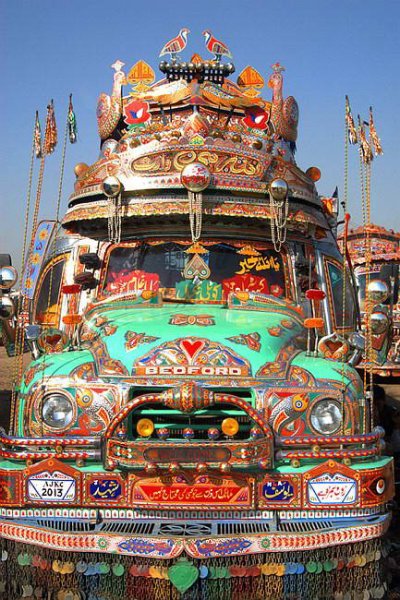 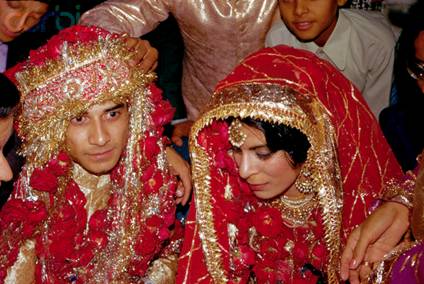 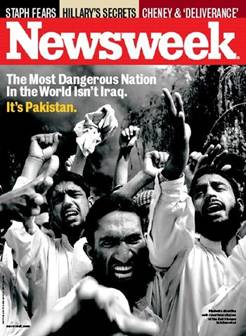