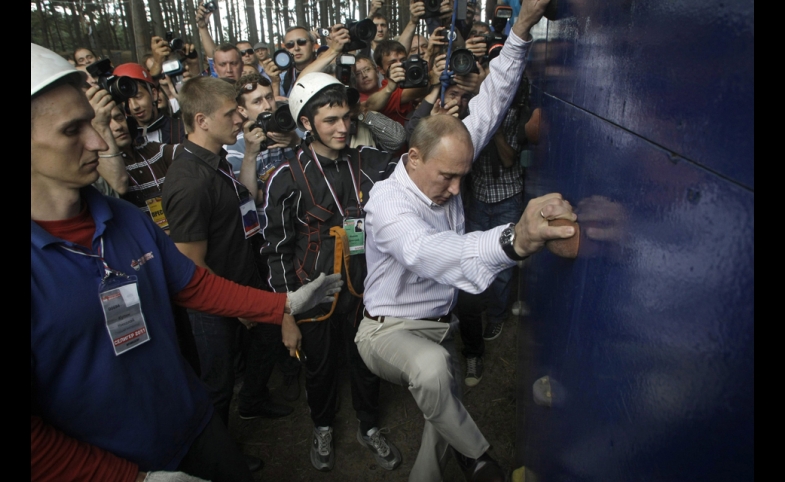 NOTE: This blog is part two of a two-part series. Part one can be found here.

Russia’s public diplomacy objectives can be categorized into four very broad and rough categories. These categories are not mutually exclusive, and do not follow a particular order of preference or significance. Depending on the specific issue or the intended public, the significance and emphasis of each approach tends to vary.

1) “Explaining” Russia to the world: Why Russia does what it does. Here the emphasis is on motivations, whether present or historical, and perceived threats, particularly from the West and violent Muslim extremists. Examples of issues in this category range from Russia’s stance on the Arab Spring and especially Syria, the reaction to “Color Revolutions” in its near abroad, and now involvement in the very real civil war in the East of Ukraine. The target audiences here are not clearly defined and it seems that they include both Russian sympathizers abroad as well as less positively inclined publics. Either way, the bulk of the messaging and engagement is done either at the highest diplomatic levels and official political statements (examples: speeches by Vitaly Churkin, Russia’s Permanent Representative to the UN, Minister of Foreign Affair Sergey Lavrov, or President Vladimir Putin himself), or through narrowly-targeted projects such as Russia Direct (aimed at engaging American political and academic sectors) and the University League of the Collective Security Treaty Organization (aimed at engaging the youth in CSTO member states).

2) Establishing an alternative to Western liberal hegemony – political, economic, and normative. Unhappy with a unipolar world order – American global hegemony, in the Russians’ view – where Russia’s interests are overtly disregarded, the Kremlin is determined to shift the balance towards a more “multipolar” world, which, it seems to be convinced, will better reflect its own needs and objectives. In the political and economic spheres, Russia has started taking major steps towards achieving this goal through the BRICS, partnerships with Latin American countries, and most recently, the Eurasian Economic Union in the post-Soviet region. Nevertheless, the normative aspect is also a major part of this project. Russia wants to counter the dominance of liberal democracy around the world, as well as the liberal norms and behaviors that it sees as essentially Western. Major targets in this regard are the people in the post-Soviet region as well as other non-Western publics in the developing world.

Yet, in the West, Russia also tries to reach out to fringe groups – for lack of a better term – whether on the left or the right, who are unhappy with their current governments and would be willing to form a discursive partnership, even if temporary, with Russia. The most prominent example of this effort is probably the RT TV network, which says it wants to question the “mainstream” narrative and bring “alternative” perspectives to its viewers in three languages. Whether or not RT is a successful public diplomacy tool is a question that is too complex to discuss here, but if one is to look at the official reports of its viewership and popularity, it is clear that the network is not a failure, particularly among the left-leaning in the West. What is more, it is important to note that the popularity of Russia’s ruling establishment, and especially of Vladimir Putin himself among conservatives in the U.S. and right-wing groups/parties in Europe, has only increased over the past few years. In short, Russia clearly does win hearts and minds abroad, whether we choose to dislike and ignore it or not.

...In the West, Russia tries to reach out to fringe groups – for lack of a better term – whether on the left or the right, who are unhappy with their current governments and would be willing to form a discursive partnership, even if temporary, with Russia.

3) Appealing to compatriots and sympathizers. This point is perhaps more significant in the near abroad, i.e. the former Soviet states. Arguably, this is Russia’s own take on the concepts of “network” and “diasphoric” diplomacy, as the country tries to reach out to ethnic Russians and Russian-speakers living abroad, cultivating a sense of common identity and trying to mobilize them when Russian perspectives and interests need to be represented in their respective countries. Examples here include, but are not limited to, organizations such as Russkiy Mir, Rossotrudnichestvo, the Fund for Legal Aid and Protection of Compatriots' Rights Abroad, or the Seliger All-Russia Youth Forum. Their activities include bringing these individuals to Russia, and also taking the Russian language, culture, and perspectives to them.

4) Promoting and celebrating Russian history and culture. Russians’ memories of their past grandeur and their contribution to the global culture arguably lie at the core of their identity and shape their current aspirations and objectives. The goal of regaining the recognition for their achievements is coupled with their desire to become a major player in world affairs once again. Critics also claim that Russia’s emphasis on the past is an attempt to compensate for the lack of recent achievements on a similar scale. Ballet and opera performances, massive events such as the Sochi Winter Olympics, and the return of grand celebrations of Victory Day (May 9, in reference to World War II), among many others, are all meant to remind the world – and Russians themselves – of all that they have accomplished and to substantiate their demand for respect and recognition in the present day.

All in all, experts, policy-makers, and practitioners seem to agree that there is no coherent Russian public diplomacy strategy yet. But Russia is trying to use various new approaches and communication and information tools to accompany her foreign policy and achieve some of her international objectives. A lot of that effort is based on the experience and practice of the U.S. and, increasingly, China. However, as discussed previously, the emphasis is on the content, which is markedly different. In that regard, there are many interesting developments and processes going on in Russia’s public diplomacy approach right now, which require our attention and understanding.