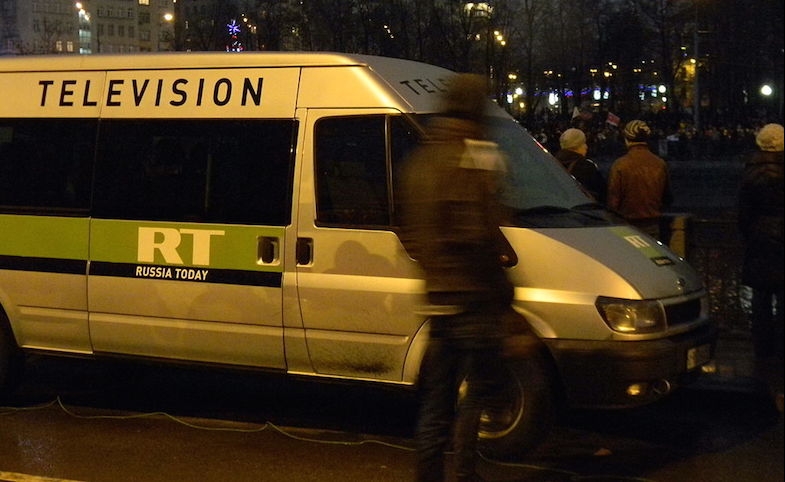 During the 1950s, there was a term that was sometimes used to describe people who were exploited by Soviet communists to publicly support their ideology. The term was “useful idiots.”

The phrase, like communism itself, has largely disappeared from use, but there are still plenty of useful idiots around. If you don’t believe it, just spend some time watching RT.

The Russian government-supported propaganda network formerly known as “Russia Today” has been trying to build a following in the U.S. and other international markets by copying the flashy production graphics and quick pacing of American cable TV newscasters, and cosmetically, at least, they come close. Their shows, which are carried on various cable systems and online in English, Arabic, Spanish, German, French, and Russian, can look a lot like a Western broadcast – until you listen to the words, and that’s where the Russians just don’t get it.

Beneath their fancy graphics and thumping background music, they’re about as convincing as Lord Haw Haw and Tokyo Rose were during World War II.

In the U.S., cable producers like to have opposing viewpoints on their shows, not only for ostensible balance (“fair and balanced” is a good thing, journalistically), but also for the drama and potentially larger audience that arguments between clashing sides can bring. But RT’s newscasts and talk shows aren’t interested in balance. They’re interested in only one side, and if you don’t already agree with that side, then their often snarky tone is not likely to change your mind.

For example, “CrossTalk,” RT’s flagship program, featured a typical panel last week of three guests who pretty much agreed on everything that was said that was critical of the U.S. (and that was pretty much everything). When host Peter Lavelle introduced a segment about a U.S. official who had called Russian President Vladimir Putin “corrupt,” he didn’t ask his guests if they thought the comment was accurate or fair. Instead he asked: “Is this Russo-phobia, or is it Putin-phobia?” Later in the show, Rory Suchet, one of RT’s news presenters, made a claim that would have caused millions of Ukrainians and Georgians, among others, to choke on their dinner if they had been watching. “There’s one thing that Vladimir Putin is very serious about: Putin tries to respect international law,” Suchet declared. “Who else is abiding by international law these days?” No one on RT’s panel disagreed.

RT’s guests, unlike the useful idiots of a half century ago, aren’t advocating communism. But their presence may lend a sheen of credibility for viewers who would otherwise tune out quickly from a network with a Manichean editorial policy that sees the United States and other Western democracies solely as economic and military predators.

Another featured RT talk show is “The Keiser Report,” hosted by Max Keiser, a former stand-up comic-turned-stockbroker, and his wife. Keiser’s past also includes stints at BBC and Al Jazeera, but you won’t find much resembling mainstream journalism in his over-caffeinated tirades. On a recent show, he railed against MSNBC host and former Republican congressman Joe Scarborough, calling him an “irresponsible nutcase” and “just a monkey who’s trying to launch a war for ratings.”

“In America, war means ratings,” Keiser informed his viewers. ”For them, war is a spectacle to sell ads for.”

RT’s guests, unlike the useful idiots of a half century ago, aren’t advocating communism. But their presence may lend a sheen of credibility for viewers who would otherwise tune out quickly from a network with a Manichean editorial policy that sees the United States and other Western democracies solely as economic and military predators.

Some might argue that these performers are just Russia’s version of American cable TV’s opinionated personalities like MSNBC’s liberal Rachel Maddow or Fox’s conservative Sean Hannity. But there’s one big difference: the American talk show hosts aren’t paid by the U.S. government.

As a public diplomacy tool, Russia’s state broadcaster looks crude and ham-handed compared to China’s CCTV, but that’s because Putin’s propagandists have taken the novel approach of spending most of their effort tearing other nations down rather than boosting their own country up. Of course, it may be that promoting a country with all the problems that Russia has – a deteriorating, oil-dependent economy; costly military adventurism; grim demographic trends – is a hopeless cause. But it does raise the question of how effective this approach is, and how long Russia can afford to keep it up.

RT says its global audience is 70 million, based on a recent Ipsos survey. By comparison, the U.S. Broadcasting Board of Governors claims a worldwide audience of more than 226 million for its broadcasters, which include Voice of America, Radio Free Europe/Radio Liberty, Radio & TV Marti, Radio Free Asia, Alhurra TV, and Radio Sawa. The BBC says the audience for its international broadcasting division, the World Service, is 210 million.

Last September, Russia’s Foreign Minister Sergey Lavrov praised RT on its 10-year anniversary. But a better sign of how much the Kremlin values the network may be its budget. Two years ago, it was about $360 million, according to RT; last year, thanks largely to the falling ruble, that had fallen to nearly half. (The U.S. spends more than three times as much on its government-supported international broadcasters.)

Is the Kremlin getting its money’s worth? If Russia’s economy doesn’t get any better, even a diehard Cold Warrior like Putin may decide that his dwindling hard currency could be put to better use than on a propaganda tool that does little to improve either his or Russia’s reputation, and that is interested only in preaching to the converted.

NB: An earlier version of this article cited a BBG analysis which estimated RT’s audience at only 10 million. Since that analysis now appears to have been based on outdated information, the reference to it has been removed and the text has been updated.