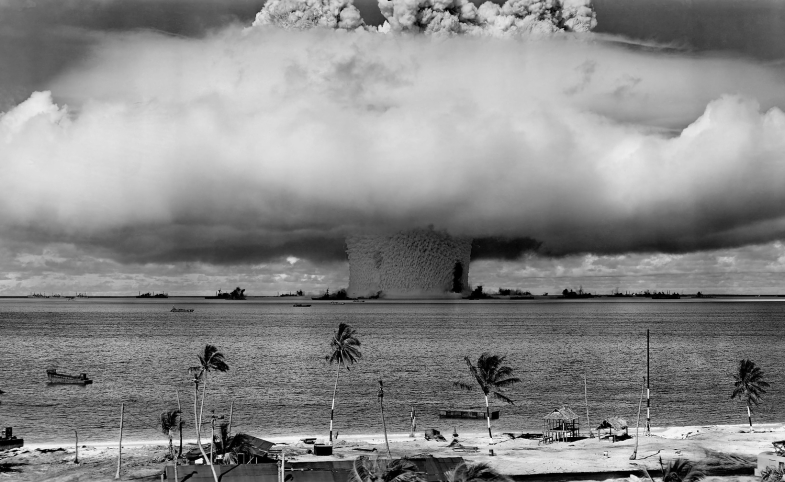 If it wasn’t inevitable, the threat was clearly lurking on the horizon. And now, legislation that would eliminate the Broadcasting Board of Governors (BBG) – the group of political appointees who oversee U.S. international broadcasting – and de-federalize the Voice of America (VOA) has been passed by the U.S. House of Representatives.

Blowing up the Board and converting the 74-year-old VOA into a non-governmental entity, the kind of drastic reform which one congressional aide reportedly described as “the nuclear option,” is now on the table.

The proposal, which came in an amendment to the annual defense spending authorization bill, was written by House Armed Services Committee Chairman Mac Thornberry (R-TX). While the chances of it becoming law, at least in its present form, are probably slim, it’s still a serious sign of just how unhappy some are in Congress with the Voice of America and the Board that oversees it and the nation’s other non-military international broadcasting.

There’s been plenty of advance warning. Probably the most quoted came in 2013 congressional testimony from then-Secretary of State Hillary Clinton, who called the BBG “practically defunct in terms of its capacity to be able to tell a message around the world.” (As secretary of state during the preceding four years, she had been an ex officio member of the BBG but apparently did not push for any reform through her representatives during that time.) Since then, U.S. Rep. Matt Salmon (R-AZ) has introduced a bill to defund the Voice of America, and U.S. Reps. Ed Royce (R-CA), the chairman of the House Foreign Affairs Committee, and Eliot Engel (D-NY), the Ranking Member, have backed two reform bills aimed at upending the current structure of the BBG. Both of those bills have received bipartisan support in the House and Secretary of State John Kerry has endorsed their efforts “to get reform that this troubled agency needs.”

The Board’s governors have been working hard to avoid a surprise like this. In recent months they have, among other things, appointed a new reform-minded VOA director and hired a new director of congressional affairs to improve relations with congress.

I believe that VOA, at its best, is a valued symbol of America. It just needs to do a better job of demonstrating that value to congress.

But the biggest change they’ve made is to streamline the way they oversee the broadcasting entities (VOA, Radio & TV Marti, Radio Free Europe/Radio Liberty, Radio Free Asia, Radio Sawa, and Alhurra TV). Rather than continue doing it on a part-time basis during occasional teleconference calls and face-to-face Board meetings in Washington fewer than a dozen times a year (as originally designed by Congress two decades ago), the Board decided to create a new CEO position and empower him to manage the entities on their behalf.

And that, ironically, may have led to the bombshell Thornberry amendment.

To their credit, the Board concluded that a full-time CEO with journalistic experience (which few BBG governors have had) could do a better job of staying on top of things. So they hired one, and asked congress to give him the legal authority to do his job – and now at least one congressman has apparently decided that, if we’re giving all this power to the CEO, what do we need the Board for?

It’s a valid question. But there are also valid responses, and here’s one: the Board can serve as a safeguard against political bias in the broadcasters’ content.

How? By law, the Board must be bipartisan, with four Democrats and four Republicans, plus the secretary of state. In the case of VOA, its Charter specifically requires it to be editorially objective and balanced, which means that its coverage should never be politically biased in favor of the party in the White House – and who better to monitor that than a Board composed of partisans from both sides? In my personal experience, the Board operated in a fair, non-partisan, and collegial manner when asked to scrutinize controversial content. They had different political beliefs, but they all believed that the broadcasters should be objective and unbiased, and that was key.

All this is not to say that a CEO is not needed. One is, and not only because part-time Board members can’t begin to oversee five multimedia journalistic organizations churning out content 24 hours a day, seven days a week. A CEO who’s authorized to oversee the big picture, manage the entity directors, take advantage of opportunities for collaboration and economies, and be accountable to both a board and outside stakeholders, is the best way to supervise and improve U.S. international broadcasting.

As mentioned above, the Thornberry amendment also calls for de-federalizing VOA and basically giving it the same status as its fellow “grantee” broadcasters. (The amendment did not mention Radio & TV Marti of the Office of Cuba Broadcasting which, like VOA, is a federal agency.)

As a former VOA director, I’ve heard all the arguments for and against keeping VOA in the government, and if VOA were more popular in congress these days I wouldn’t worry that much about de-federalization. But VOA isn’t popular now, and I am concerned that converting it into an NGO dependent on federal grants could be the first step toward eventual de-funding. I believe that VOA, at its best, is a valued symbol of America. It just needs to do a better job of demonstrating that value to congress.

Meanwhile, the challenge facing the BBG is to convince Congress they have gotten the message, and that the new CEO and other changes they’ve made will soon produce visible improvements in fulfilling their mission of providing news and information to the rest of the world in a way that Americans can be proud of. Central to this will be doing a better job of keeping members of congress (and the secretary of state) better informed about what VOA and her fellow broadcasters do every day, and why it’s important to the nation.