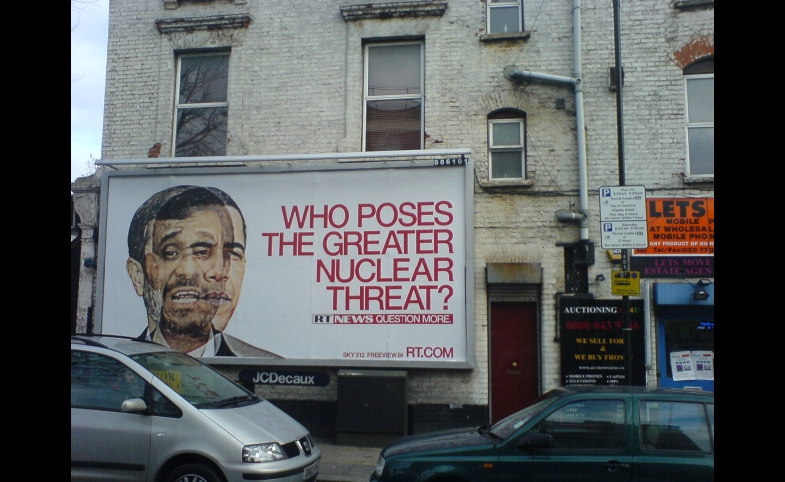 NOTE: This blog is part one of a two-part series. You can find part two here.

“Russian public diplomacy” may sound like an oxymoron to many in the West these days. But dismissing the entire effort of an increasingly well-oiled state and media machinery as “futile propaganda” does not do Russia justice and, perhaps more importantly, increases the risk that Western governments (and allies) will continue making the same mistakes that have contributed to the rapid escalation of the current international crisis.

Regardless of the ultimate characterization, it is essential for policy and opinion-makers to understand the complexities of the Russian approach to foreign image-making and to be able to respond adequately, if they are to try dissolving some of the tension.

The Identity Question
Before one can have any discussion about Russian public diplomacy or foreign policy in general, it is important to understand Russians’ views of themselves, their perceived role in the world, and their overall objectives.

Books can be written on the subject, but just in a nutshell: the demise of the Soviet Union, the discourse of “defeat” in the Cold War, and the chaos that followed in the 1990s hit Russia pretty hard. The country was in need of a new identity, a new vision that would balance its international aspirations with its real economic and military capabilities as well as Russians' sense of a great past.

Taking their cue from the Chinese, the Russians have realized that simply copying the Western approach does not serve their interests.

The 2000s proved to be indecisive in Russia’s search for identity, as the country oscillated between self-perceptions that were Western, Eurasian, and everything in between.

In the second decade of the 21st century, however, Russia – at least its political elite and intelligentsia – seems to have attained significant levels of clarity in this regard. The country wants to be recognized as a global power, willing and able to counter the dominance of the U.S., and one whose interests are acknowledged and respected by others around the world.

This stance clashes with the Western worldview, resulting in the tensions that we observe today.

Accordingly, the Russians realized that their aspirations would need to be accompanied by appropriate information campaigns that cultivate and promote an objective – not necessarily positive – image of Russia abroad.

As one of my recent interviewees from Russia Direct put it, the overall objective, particularly in the West, is to demonstrate and explain that there is internal logic to everything Russia does at home and abroad. You do not have to agree with that logic; but, according to her, if you understand where the Russians are coming from, there can be ground for dialogue, compromise, and cooperation.

Russian Public Diplomacy?
After the demise of the Soviet Union, Russia largely ignored its international image and appeal: during the “dark 90s,” there were many other issues and priorities the country had to deal with.

However, by the mid-2000s, as Russia began to enjoy a significant economic rise mostly thanks to the oil and gas boom, the questions of attracting foreign investments and gaining recognition as a great power came to the fore.

That is when the government started coming up with major projects such as the RT TV network, Rossotrudnichestvo (Federal Agency for Commonwealth of Independent States Affairs, Compatriots Living Abroad, and International Humanitarian Cooperation), Russkiy Mir (Russian World) Foundation and Gorchakov Foundation, among others, charged with promoting the Russian language, culture, and perspective around the world.

The issue of Russia’s international image became more acute during and after the 2008 war with Georgia, the 2011-2012 anti-Putin protests, and now with Ukraine. That is also when the government intensified its public diplomacy efforts and started devoting increasingly larger resources to the cause.

Nevertheless, a distinctly Russian approach to public diplomacy has not emerged throughout these years. Most of the early discussions of the subject drew heavily from the American literature, and particularly the work of Joseph Nye. In practice, too, Russia seemed to be borrowing heavily from the American and European examples, trying to replicate many of their programs.

Russia, while very critical of such policy by the U.S., seemed to realize that she, too, could utilize similar methods and approaches, simply to promote her own interests and objectives. Development aid, military and other partnerships, as well as general trade deals now come with very tight “strings attached” – something, the Russians claim, they have happily borrowed from the U.S.

The major difference, then, lies in the content of what Russian public diplomacy and soft power aims to achieve. Taking their cue from the Chinese, the Russians have realized that simply copying the Western approach does not serve their interests. Therefore, they have started to “de-Westernize” these models – reformulating and reshaping them – in order to adapt them to their own context and aspirations and to come up with an approach that is essentially more “Russian”.

Part two of this series will appear later this week.

NOTE: This blog is part two of a two-part series. Part one can be found here. Russia’s public diplomacy objectives can be categorized into four very broad and rough categories. These categories are not mutually exclusive...