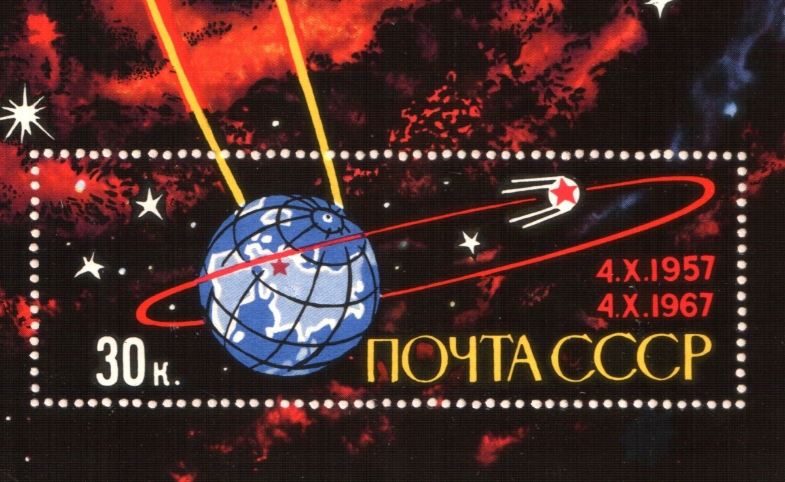 In 1957, the Soviet Sputnik, the first artificial Earth satellite, caused the "Sputnik crisis" in the United States and soon led to the "space race." Modern Russia’s generously-funded international broadcasting complex has recently launched their own Sputnik, “a major new media brand with modern multimedia centers in dozens of countries”—escalating the ongoing information race between Russia and the West.

Produced by Russia’s international broadcasting agency, Rossiya Segodnya (Russia Today, in Russian), Sputnik is envisaged as the country’s primary global media brand. With news feeds in Arabic, Chinese, English, and Spanish, and the website content separated into an International, UK, and US sections, the organization’s reach is both vast and precise. In 2015, Sputnik aims to make its radio broadcasting available in 30 languages, for a total of over 800 hours a day—almost thrice the Soviet foreign radio service’s daily volume at its peak—covering over 130 cities and 34 countries. All this will be produced at the Moscow headquarters and throughout dozens of multimedia hubs worldwide.

It may be that Russia’s global media are preaching to the choir, those already disenchanted with Western media and policies. The preacher, nevertheless, is increasingly articulate, sophisticated, and vocal, and the choir more numerous, singing in new languages across new countries.

Dmitry Kiselev, a popular TV presenter and staunch Kremlin supporter, became Rossiya Segodnya’s Director General, while Margarita Simonyan, already RT’s Editor-in-Chief, took the helm of the agency’s editorial policy. Putin explained his choice by arguing that “there should be patriotically minded people at the head of state information resources, people who uphold the interests of the Russian Federation.” Following Russia’s move into Crimea, the EU put Kiselev on the sanctions list as a “[c]entral figure of the government propaganda” and, at the height of the Russia-West confrontational exchange past summer, the presenter boasted of Russia’s capabilities to turn the U.S. into “radioactive dust.”

Sputnik’s editorial policy, then, comes as no surprise. In a video ambitiously titled "New Era in International Broadcasting presentation," Kiselev outlined three foundational pillars of Sputnik’s vision: a multipolar, multicolored, and multicultural world. In such a world, “Japan is Japanese, China – Chinese, Turkey – Turkish, [and] Russia – Russian,” while strict adherence to international law assures a just world order. At the same time, conspicuously not naming a specific country, Kiselev asserted that “The world has grown tired of one nation considering itself exceptional and bound to lead.”

Sputnik’s launch day op-ed headlines left little doubt as to which country Kiselev had it mind: “US Ebola Policy Could Have Darker Motives,” “Dysfunctional America,” “Presidential Crimes: Then and Now,” and “The Empire of Chaos and the War on Drugs.”

In the meantime, Russia has been determinedly shrinking the influence of international, primarily American, media and cultural organizations in its own backyard. In response to the Voice of America’s application to renew their broadcasting license, Kiselev replied with a blunt “We are not going to cooperate anymore,” explaining that VOA had been “mere spam on [Russia’s] frequencies.” Since 2012, the same fate befell USAID, American Councils, and the largest U.S.-Russia student exchange program, FLEX. Following Russia’s hastily passed law that limits foreign capital in media companies to 20% and other increasingly rigid regulations, CNN decided to leave Russia before the end of this year.

The media strategy is fully in line with Russia’s latest Concept of the Foreign Policy from 2013: “Russia will seek to ensure its objective perception in the world, develop its own effective means of information influence on public opinion abroad, strengthen the role of Russian mass media in the international information environment providing them with essential state support, as well as actively participate in international information cooperation, and take necessary measures to counteract information threats to its sovereignty and security” (Emphasis added).

Reported on with skepticism in its infancy, Russia’s recent information offensive seems increasingly evident to some and outright alarming to others. Yet Russia’s media signal will only amplify in the coming years. The Kremlin reportedly revised and increased the financing of Russia’s international broadcasting for 2015-2017. In 2015, RT’s budget will swell by almost a third to $400 million and Rossiya Segodnya’s by 176%, to $170 million.

The investments seem to be paying off. Most recently, in what The Guardian labeled “a new soft power onslaught,” RT launched UK-specific 24/7 broadcasting. In its first week, RT UK attracted half a million viewers. Already broadcasting in English, Spanish, and Arabic, RT is also soon to expand into French and German. And, of course, there’s the record-breaking RT YouTube channel, the first news channel to reach one billion views.

Russian media’s central message—markedly anti-American, anti-corporate, and anti-establishment—evidently resonates with millions, proving that there is clearly a popular demand for an alternative narrative. There is, however, a curious discrepancy between Sputnik’s and RT’s rhetoric and political economy. Discursively, they portray, or disguise, their efforts as subversive to the global and national elites, capitals, and powers. Financially, hundreds of millions of dollars ensured by the oil and gas behemoths, directly or indirectly controlled by the Kremlin, tell a different story.

It may be that Russia’s global media are preaching to the choir, those already disenchanted with Western media and policies. The preacher, nevertheless, is increasingly articulate, sophisticated, and vocal, and the choir more numerous, singing in new languages across new countries. Outgrowing its clumsy beginnings, Russian outlets are progressively moving from the margins and towards the mainstream. Criticisms of outright propaganda, poor journalism, or overwhelming anti-Western bias may still apply, but its voice can no longer be simply derided and ignored, for it has become too loud for that.