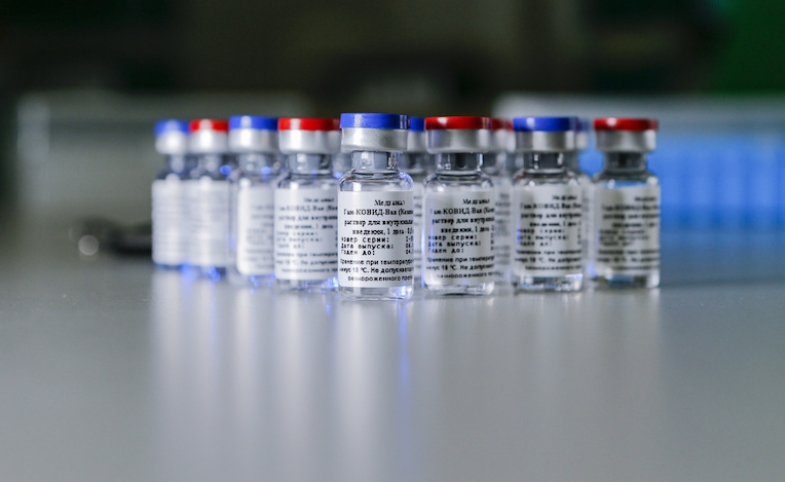 Earlier this month, the Russian government released the first batch of its COVID-19 vaccine, Sputnik V, for civilian use. Sputnik V’s logo and the tagline, “The first registered COVID-19 vaccine,” allude to the world’s first space satellite that the Soviet Union launched in 1957. Whereas the original Sputnik triggered anxiety in the West about the Soviet Union’s technological superiority, this time commentators promptly dismissed Sputnik V as “a tool of propaganda” and a “PR stunt.” Yet, the Kremlin’s rush to pioneer treatment for the novel coronavirus and its retrofuturistic promotional style illuminate key domestic and foreign pursuits of the Russian power.

Sputnik V’s glossy website is reminiscent of national branding—think GREAT Britain or Incredible India—and makes no secret of the reputational hopes Russia places upon the vaccine’s success. The site is available in eight languages and tracks news coverage of the vaccine from around the world. It offers a press kit with photos, videos, and graphics for anyone wanting to cover the initiative. As the site explains of Russia’s reputational goals, “In 1957 the successful launch of the first space satellite Sputnik-1 by the Soviet Union reinvigorated space research and exploration around the world. The announcement of the new Russian COVID-19 vaccine created a so-called 'Sputnik moment' for the global community. The vaccine is therefore called Sputnik V.”

Sputnik’s promotional logics are embedded within Russia’s domestic and foreign political dynamics of the past decades. Sputnik V’s historical symbolism reflects the Putin regime’s time-honored strategy of fostering Soviet nostalgia in order to bolster its popularity and legitimacy at home. Sputnik V’s outward-facing promotion reveals the Kremlin’s recent preoccupation with restoring the country’s Soviet-era reputation of a global scientific and technological powerhouse.

The name “Sputnik” has become something of a go-to for Russia’s state-affiliated initiatives. In 2014, Russia launched a state-funded search engine and an international broadcaster under the name Sputnik. Both initiatives had the stated aim of countering Western technological and informational dominance.

The selective use of the Soviet past has been a mainstay of Putin's administration. After Vladimir Putin came to power at the turn of the century, the Russian state began to recast Soviet symbols in a positive light and assign them centrality in the country’s official discourse. For example, just months into Putin’s presidency, Russia reinstated the Soviet anthem’s melody. The famed children’s writer Sergey Mikhalkov, who contributed lyrics to the Soviet anthem adopted in the 1940s under Stalin, wrote lyrics to the new anthem.

Russian authorities’ instrumentalization of Soviet symbols is meant to enhance their political legitimacy at home. The foundational myth of Putin’s regime suggests that, after liberal elites in the “turbulent 1990s” plunged the country into socio-economic chaos and embarrassing subservience to the West, Putin brought Russia prosperity and stability in the 2000s. In reality, the roots of the current ruling class’ economic and political standing are also to be found in the 1990s. The Kremlin’s emphasis on Russia’s connections to the glorified Soviet past and denigration of governance in the first post-Soviet decade, then, is meant to absolve the current regime of responsibility for the hardships of the transitional period.

Whereas the Kremlin’s recasting of Soviet symbols began early into Putin’s first term in the early 2000s, it was the crisis in the Russia-West relations in Putin’s third term of 2012-18 that provoked Russia’s renewed quest for technological prowess. In the spring of 2014, following Russia’s annexation of Ukraine’s Crimea and support for pro-Russian separatists in Eastern Ukraine, the country faced financial and trade sanctions. In response, Russian leadership pronounced its orientation toward technological sovereignty.

The technological sovereignty agenda is two-pronged. At home, the goal is to achieve infrastructural independence from foreign states and companies. Internationally, the aim is to increase national competitiveness in the global markets and enhance Russia’s status as a technological power. As Putin opined in a meeting with the country’s digital champions in 2014, whenever technological development “happens on a national basis, this always benefits the state."

Russia’s ideas about technological sovereignty mirror the Putin administration’s beliefs about sovereignty as the foundation of Russian statehood. Putin famously proclaimed at the meeting of the annual Valdai Club in 2007 that “Russia cannot exist without defending its sovereignty. Russia will either be independent and sovereign or will most likely not exist at all.” After Russia’s dramatic fallout with the West in the aftermath of the Ukrainian crisis, Russian leadership has framed the scientific-technological sector, from genetics to artificial intelligence, as instrumental to preserving the country’s sovereignty and international standing.

To date, Russia’s high-tech industry has struggled to produce adequate substitutions of foreign technologies. Ironically, on the same day that Sputnik V was publicly released, Russian media reported that the state-affiliated telecom giant Rostelecom quietly discontinued its search engine also named Sputnik. The search engine launched in May 2014 as one of the earliest initiatives under the banner of technological sovereignty, but six years and over 30 million US dollars later it didn’t reach even a percent of the market.

While at the material level fulfilling Russia’s vision of homegrown technological might is proving arduous, Russian authorities have efficaciously promoted technological sovereignty as the country’s global brand. For example, at the plenary session of the Saint Petersburg International Economic Forum in 2019, which included China’s President Xi and the UN Secretary-General Gutteres, Putin proposed that “Russia has capable research potential, and a good starting point for designing the most advanced technological solutions.” These innovations, the Russian president argued, would provide the opportunity “for the state to build its powerful sovereign potential” and for Russian companies “to enter a new technological era.”

It is common for regimes of all ideological persuasions to employ scientific and technological achievements for nation-building and international self-promotion. Russia’s incessant allusions to Sputnik, however, lay bare the fact that in the past sixty years the country hasn’t produced an equally recognizable technological innovation. The onus is on the Russian leadership, then, to prove that there is substance behind Sputnik V’s flamboyant presentation.

International scientific cooperation and vaccine diplomacy are intertwined because both represent state civilized behavior during a worldwide crisis such as COVID-19. A civilized approach by countries promoting vaccine...

Note from the CPD Blog Manager: This is part one of a two-part series on soft power in the Balkans during the COVID-19 vaccine rollout. Part two will focus on European powers. Read part two here. In North Macedonia, a...

Note from the CPD Blog Manager: This is part two of a two-part series on soft power in the Balkans during the COVID-19 vaccine rollout. Read part one here. In a report for the Brussels-based think tank Breugel,...