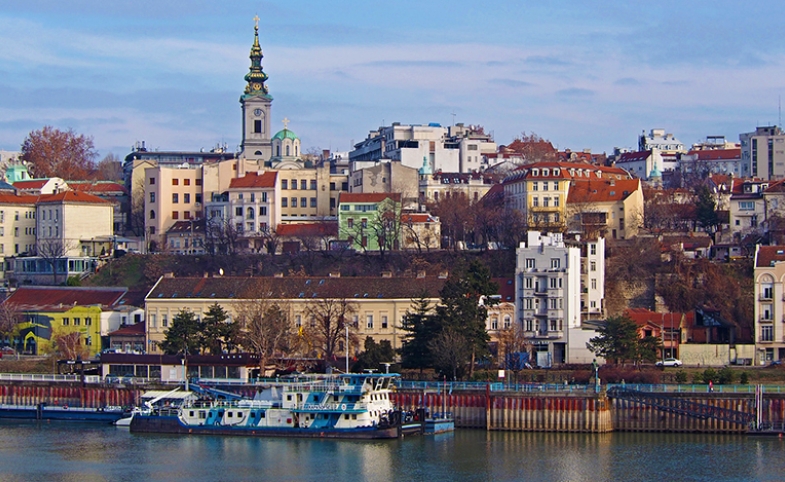 Note from the CPD Blog Manager: This is part one of a two-part series on soft power in the Balkans during the COVID-19 vaccine rollout. Part two will focus on European powers. Read part two here.

In North Macedonia, a gleaming new Chinese-built railway locomotive stands on a track. In Serbia, Kuwait has contributed to a new railway station in Belgrade, as advertised in The New York Times. Also in Serbia, Russia maintains a near monopoly on oil and gas supplies. In Kosovo, Turkey runs the Pristina International Airport and a power plant. The states of the Persian Gulf have invested in Balkan airlines and defense industries and have financed new mosques. All of these protagonists have sent vaccines, as we shall see.

A brilliant 2017 book by political scientist Dimitar Bechev on the role of the most prominent non-EU power in the evolution of the Balkans today—Vladimir Putin’s Russia—insists that tanks notwithstanding, soft power is the key currency of influence that the Kremlin deploys. Bachev's book, Rival Power: Russia's Influence in Southeast Europe, states, "Soft power is hands down, one of the most significant – if not the most significant – asset that Russia has at its disposal. Winning over hearts and minds is easier and immensely more cost-effective than bribing governments, maintaining alliances, let alone resorting to hard power."

While going over all the sentiments that play into the cultural and emotional attachments of many Balkan peoples to Russia—religion, pan-Slavism, anti-Americanism, anti-European ‘multiculturalism’ and political correctness—Bechev makes clear that this is a strictly transactional relationship. Putin, while a much-admired personally, has no ideology to export, much less an economic model to propose. But media and civil society, says Bechev, "constitute an arena of remorseless struggle," in which the battle over "ideas, culture, and information" is always zero-sum. But none of the Kremlin’s many proxies in the neighborhood have done more to fuse Russia’s interests with his own than Hungary’s Viktor Orbán. Wherever far-right parties take over in the Balkans—in Serbia, Croatia and Slovenia—they will find an outstretched hand from Orbán, and thence to Moscow.

Orbán appears determined to build his own alternative ‘Europe,’ based on a sphere of influence stretching from Romania to North Macedonia, with Serbia as the pivot.  In coordinated, parallel efforts, Hungary and Serbia are using media and sport to construct forms of soft power hegemony which will, according to the Ljubljana (Slovenia)-based media expert Marko Milosavljevič, lock Balkan audiences into their TV channels with their "anti-western narratives, which correspond with (their countries’)  growing ties to the likes of China and Russia." The point is to become content provider and agenda-setter for the entire region, with plenty of fake news thrown in for good measure.

If media and civil society remain the key soft power battleground in the Balkans, the anti-COVID battle has supplied an extraordinary boost for the one superpower that has made its arrival felt most heavily in the region in the last 10–15 years: China. A report prepared for the Osservatorio dei Balcani e del Caucaso, Italy’s leading research institute on the area, noted that Serbia had obtained 3.5 million vaccine doses from China by early spring 2020, to the point where the government was exporting them to its political friends in the neighborhood, and even to the Serb minority in Kosovo. When the first planeload of medical help from China arrived in Belgrade, President Vučić went to meet it, kissing the Chinese flag.

According to researcher and columnist Vladimir Shopov, writing for the European Council on Foreign Relations: "China is slowly transforming its interactions with Western Balkans countries in sectors such as culture, media, and politics into long-term and institutionalised relationships." Indeed Shopov puts culture close to the top of his list of examples: "Beijing has an increasingly expansive, structured approach to using culture as a diplomatic tool in the Western Balkans."

Other actors continue to make their cultural presence felt in the Balkans. An article from July 2020 in the Turkish journal Modern Diplomacy lists the political and military gestures Turkey has been making to consolidate its action in the area and emphasizes Erdogan’s personal ambition to "(position) himself as the main 'advocate' [sic] of the Islamic world." The vast number of Muslims in the Balkan nations is emphasized, as is the presence of "1.5 million ‘Balkan Turks.’" The article is particularly eloquent on the cultural dimension of Ankara’s efforts:

"In recent years many experts have noticed Turkey’s 'soft force,' and the Balkan Region is no exception. The Balkans have become a venue for dozens of educational, healthcare and cultural projects, with Turkey financing humanitarian campaigns and investing hefty sums in educational and medical projects, and in infrastructural and energy facilities. Under development is a plan to publish history textbooks in tandem with Albania, North Macedonia, Bosnia and Herzegovina. According to the Internet edition Balkan Insight, the popularity of Turkish soap operas in the Balkans boosts Turkey’s authority, simultaneously making it possible for Turkey to 're-write history.'"

But even these authors admit that Turkey’s efforts to leverage its cultural connections to Balkan Muslims cannot be backed up with serious material or political resources. Only in late 2021 is a visible Turkish vaccine effort likely to emerge.

The one remaining influencer that does posses the resources to back its ambitions is the United Arab Emirates. For most onlookers, the real name of the game is business, with the Emirates establishing their first embassy in Montenegro in 2012, focusing on tourism and agriculture. The preferred interlocutor is once again Serbia, where high-profile business deals, a $1 billion state loan and a megalomaniac plan for developing Belgrade’s waterfront on the Danube all form part of the picture. Everywhere, operators from both sides can recognize and appreciate each other’s ways of doing business: "a modus operandi which is clearly top-down, largely non-transparent, and therefore capable of entrenching existing political and business elites through clientelistic routes," as researcher Tena Prelec wrote in a 2018 report for the London School of Economics. When it came to vaccine diplomacy, in 2020 the UAE sent "planeloads" of medical aid to Serbia, Croatia, Montenegro and North Macedonia but none to Muslim Bosnia. Observers in the Bosnian capital, Sarajevo, said the explanation was simple: the Bosnians had sympathizers in Turkey, Egypt and Qatar, all enemies of the UAE at the time.

The dreadful irony of all this anti-COVID effort is that according to local surveys, 42% of the people in the region are opposed to taking any vaccine, according to the June 24, 2021 online broadcast of "Balkan Barometer 2021: People and Business Viewpoints," presented by the Regional Cooperation Council. Indeed COVID—and its antidotes, the foreign vaccines—are prime subjects in the massive waves of misinformation and disinformation that sweep over lands that are traditionally the most susceptible in Europe to conspiracy theories.

A second part of this survey will discuss ambiguities in the European Union’s efforts to extend its vaccines, laws, examples and membership opportunities to the Western Balkans.

Photo: Waterfront in Belgrade, Serbia. Image by sonic182 via Flickr. (CC BY 2.0)