Home|Digital Diplomacy in the Time of the Coronavirus Pandemic 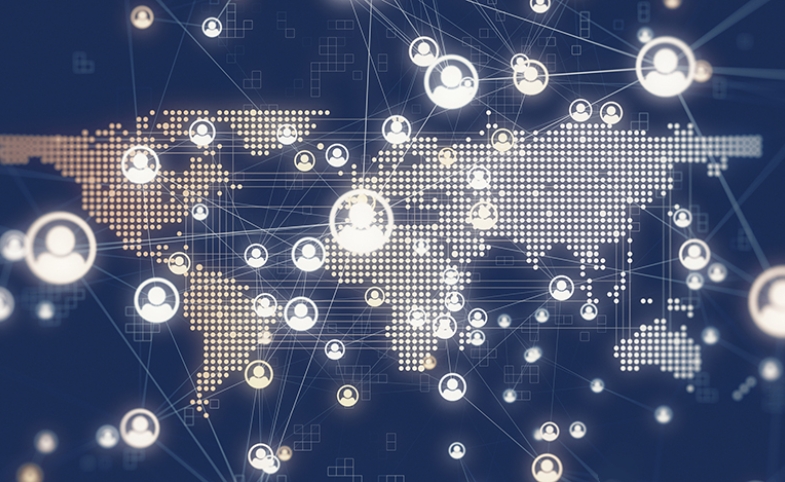 Over the past month, foreign ministries (MFAs) have been actively involved in national efforts to stem the coronavirus outbreak. Thus far, foreign ministries have been charged with three tasks. First, offering consular assistance to citizens stranded abroad. Second, acquiring much-needed equipment from other nations including ventilating machines and protective gear for doctors. Third, fostering international collaborations through which scientists can jointly search for a vaccine to the coronavirus. To date, little attention has been paid to the role that digital diplomacy can, and should play in the diplomatic management of the corona crisis. In this blog post, we identify three domains in which digital technologies can offer diplomats and added benefit.

We first turn our attention to consular diplomacy and the use of digital channels and bots to converse with citizens abroad. Employing bots can help diplomats better allocate strained communication resources. Next, we turn to social media and argue that times of crises offer opportunities for states looking to manage their image. Finally, we deal with a crucial component of crisis management: combating disinformation and conspiracy theories that confuse citizens and erode trust in government. We conclude by arguing that diplomats who integrate digital technology into this crisis, will find it easier to reap the benefits of digitalization in the next crisis. 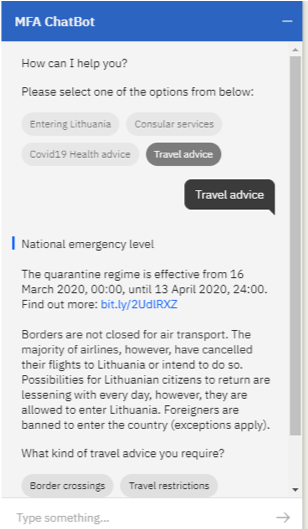 As the corona crisis started to spread from Asia to Europe and the United States, countries began closing their borders one after another, leaving thousands of their nationals stranded. Interest in bilateral relations also soared. Embassies and consulates soon turned to their digital channels to offer advice on return flights  and repatriation procedures, but also to demonstrate solidarity with the local population affected by pandemic and to explore conditions with the host authorities for joint responses to the crisis.

A novel development during this period has been the use of chatbots for providing health info and updates about the evolution of the pandemic. As public anxiety has continued to escalate, MFAs and embassies have been under increasing pressure to provide accurate and timely information about the nature of the threat and the responses that authorities have taken to protect and assist the public. Chatbots can help with that as most of the institutions have been overwhelmed by the magnitude of the task and the lack of human resources.

Working in collaboration with WhatsApp, the World Health Organization (WHO) launched a dedicated messaging service in four languages (Arabic, English, French and Spanish) offering situation reports, travel advice and myth busters. This approach was soon followed by national authorities in the UK, Australia, India and other countries. With the support of DigDiploRox, the Lithuanian Ministry of Foreign Affairs has also deployed an AI-assisted chatbot that provides COVID-19-related health advice but also information on travel restrictions, consular services and conditions for entering and leaving the country during the quarantine (see screenshot). Importantly, the Lithuanian MFA Chatbot can learn to refine its answers based on the patterns of requests that it receives.

The COVID-19 pandemic may well mark the point where MFAs will decide to embrace chatbots as key instruments of consular communication in preparation for the next crisis.

The corona crisis is both unique and generic. It is unique as corona is the first global pandemic in more than a century. Yet it is generic as most nations have employed similar tactics. Following the example of China and South Korea, nations throughout the world have closed their borders, imposed quarantines and sought to secure medical equipment. All the while citizens are online comparing their nation’s handling of the crisis, to that of other nations. Herein lays an opportunity. Indeed, diplomats can now use social media to document their nations’ successful efforts to contain the coronavirus outbreak while holding true to national values.

All the while citizens are online comparing their nation’s handling of the crisis, to that of other nations.

One case in point is China. During December of 2019 newspapers first reported on a deadly virus in China. Reports tended to portray China as failing to curtail a mere “flu.” Next, news articles depicted China as an oppressive state welding peoples’ doors shut. Now China has been heralded as the victor of corona while its doctors are dispatched to Italy and Spain. China has also sent medical gear and equipment to the EU. The fact that the world is emulating Chinese social distancing measures bolsters its international image.

Other nations have also taken unique measures that could be shared online. Israel has paid its national carrier, EL AL, to return Israelis stranded in India, Latin America, South America and even the U.S. Germany is currently treating Italian patients, thus holding true to the vision of a united Europe; Iceland has decided to test every single citizen for COVID-19 while Cuban doctors have flown to Europe to share their knowledge. By sharing success stories, foreign aid projects and even technological innovations, nations may be able to craft a new national image, one that will prove an important asset when the coronavirus passes.

The corona crisis is also a digital disinformation crisis. Conspiracy theories, lies and falsehood are shared digitally within and between nations. Studies show that conspiracies theories thrive in times of crisis as many people use them as a cognitive lens to make sense of what is going on, especially when official information is lacking or not trusted. Their role during a crisis is always toxic: they amplify public anxiety, keep up the blame-game, feed the digital ‘kangaroo courts,’ and make the management of the crisis even more difficult. Some of the social media platforms have launched their own information centers to educate the public about the crisis or to contain disinformation, but their effectiveness remains uncertain especially when disinformation is spread by influential media or political actors.

At times these falsehoods are intentionally disseminated by state actors for strategic reasons. Such is the case with the conspiracy theories spread by Russian channels about “global elites” deliberately weaponizing or exploiting the virus for their own ends, with the aim is to induce distrust in national and European authorities and healthcare systems, as well as in international institutions. Other times, conspiracy theories are shared by masses of people through apps such as WhatsApp. In Israel, WhatsApp messages have suggested that China’s medical research facility is located in Wuhan, where the virus started, or that the virus is Russian-made and is being used to start a new world war.

Diplomats must dedicate digital resources to tracking and neutralizing fake social media accounts thus limiting the spread of such theories. Efforts should also be made to map domestic theories and debunk them. Fighting disinformation is crucial as conspiracy theories erode trust in government, reduce faith in legitimate media and breed suspicion and fear of other nations. They are thus the very undoing of diplomacy.

The pandemic has severely tested MFAs’ capacity to offer timely and effective consular assistance, to protect the national image of their countries as the crisis escalated, and to counter the digital disinformation spread by an anxious public or by strategically minded actors. At the same time, it has showcased the need for MFAs, once the crisis is over, to draw the right lessons, train themselves to think digitally "outside the box" and start upgrading now their digital know-how, tools and strategies so that they will be better prepared to face the next global crisis, which may come sooner than expected.

This piece was written on behalf of the Oxford Digital Diplomacy Research Group.