Home|How to Use Social Media to Make Sense of International Crises? 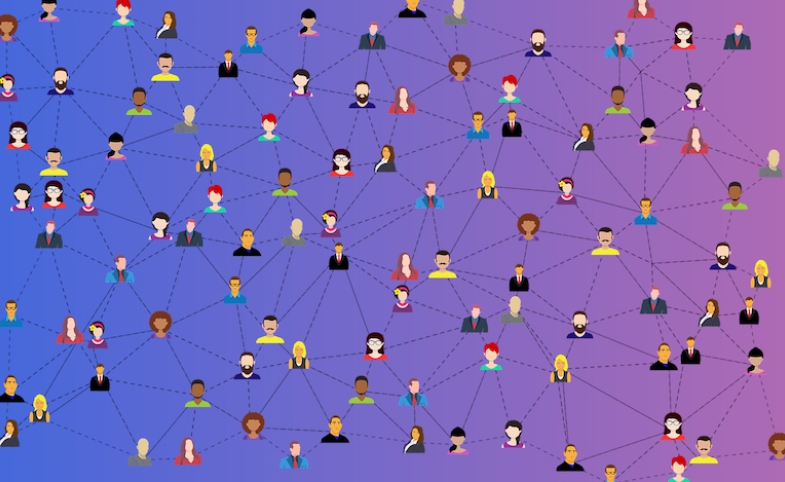 How to Use Social Media to Make Sense of International Crises?

Imagine you are the British Prime Minister, Boris Johnson, and you wake up one morning learning that the head of the Iranian Islamic Revolutionary Guard Corps (IRGC), Qassem Soleimani, died in a U.S. drone attack, that #WorldWarThree is trending on social media, that the U.S. President Donald Trump just threatened on Twitter to destroy Iranian cultural sites, “perhaps in a disproportionate manner,” and that the U.S. House Foreign Affairs Committee has started an acrimonious constitutional dispute with the U.S. president, again on Twitter, about which branch of the federal government has the legal power to declare war.

Each of these events is unquestionably a source of grave concern, but all together they may well signal the beginning of a major international crisis. The big question is, of course, what to do, but in order to answer it you first need to make sense of what is going on. Social media may be able to provide some help if one knows what to look for.

The first approach would be to focus on the viral potential of the crisis, especially its reach and intensity. Virality analysis is a good first step of crisis sense-making, especially when the unfolding events are ambiguous, information is scarce, and the “dots” between potential risks and consequences cannot be easily connected. It allows us to draw preliminary conclusions about whether the crisis is about to morph into something more serious by disseminating itself rapidly and making itself sustainable via emotional intensity.

It is however important not to overstate the significance of social media storms. They do not tend to last long as they need fresh controversies to keep the conversation going and to compensate for the terribly short tweet half-time. That being said, high levels of reach and negative sentiment form an ominous combination that needs to be taken seriously.

As the first graph below indicates, the WWIII hashtag exploded in the aftermath of the Soleimani’s death driven by hard negative emotions, but by the end of the next day it almost vanished. The other two related topics of conversation, #Soleimani and #HardRevenge, have been much more limited in scope. However, it is the net sentiment metric that deserves closer inspection (see second graph)[1] as it clearly indicates that public anger has continued to rise, rather than dissipate[2], in the following days. This is important as mounting public anger with no mechanism or channel for condensation is like the proverbial fire that just needs a spark to ignite. 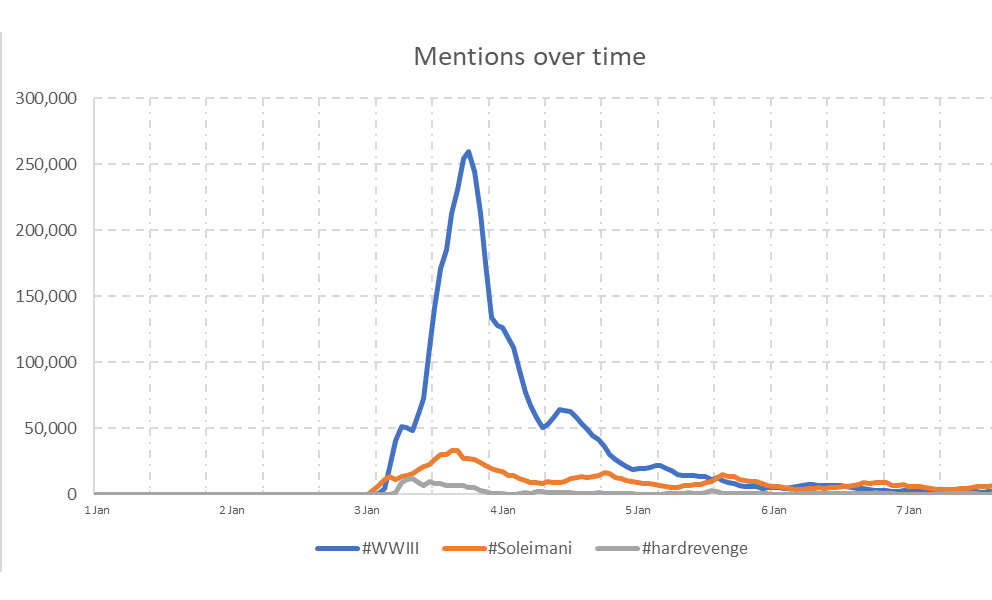 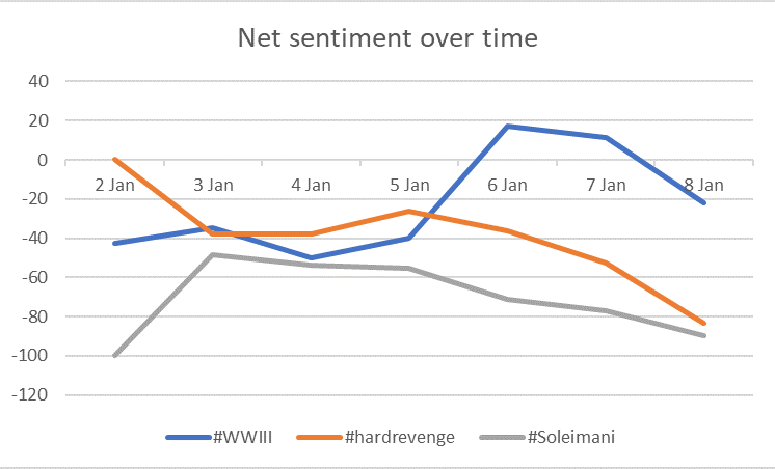 The second approach seeks not only to monitor the public mood online, but also to identify qualitative signals that may shed light on the possibility of the crisis to escalate.

Signalling analysis requires a careful assessment of the statements made by the main stakeholders with the goal of spotting critical nuances in their positions. Signalling theory, developed initially in economics and biology and more recently in communication studies,  claims to do exactly that: to differentiate between unreliable and “honest” signals by assessing whether the costs of producing the signal outweigh the benefits.

In other words, the more resources are “wasted” on producing the signal, as suggested by the handicap principle, the more reliable the signal is. Crisis escalation will therefore be associated with signals that could make leaders lose significant political capital if they fail to follow up on their statements (hence the “handicap” idea).

Key messages posted by Iran's Foreign Minister, Javad Zarif, (see below) do not fit well this pattern as they are quite moderate in tone, coached in legal not political language, and sufficiently elastic to cover possible reversals. In short, they are unlikely to create any political “handicap” for the author.

As 5th & final REMEDIAL step under paragraph 36 of JCPOA, there will no longer be any restriction on number of centrifuges

Iran took & concluded proportionate measures in self-defense under Article 51 of UN Charter targeting base from which cowardly armed attack against our citizens & senior officials were launched.

We do not seek escalation or war, but will defend ourselves against any aggression.

The third approach zooms in on the broader implications of the crisis. More specifically, contagion analysis seeks to determine whether the crisis has prompted other countries to declare their support or opposition to the position of the conflicting parties in a manner that may be conducive to crisis escalation.

Again, there is little to support this idea as most of the actors with a direct or more remote stake in the security of the region, including China and Russia, have asked the two parties to take steps to de-escalate the situation (below, see a sample of tweet reactions from the ministries of foreign affairs of UAE, Germany, Saudi Arabia and President Macron).

Perhaps a more interesting question would be whether the crisis could have a “long tail” by generating conditions for a possible geopolitical realignment between the U.S. and its European allies. As a single event, this sounds unlikely, but as a node in a series of similarly critical events, things may start to look quite differently. Complex contagion theory suggests that multiple sources of activation do trigger behavioral change, including in politics.

What is more difficult to figure out is the threshold at which such complex contagion could become successful, but this is a question for another day as it requires a more elaborate discussion.

Essential that the region pulls back from the current & troubling tensions. De escalation is both wise & necessary. A political path towards stability must follow.

The Kingdom’s statement regarding the events in Iraq stresses the Kingdom’s view of the importance of de-escalation to save the countries of the region and their people from the risks of any escalation.

Foreign Minister @HeikoMaas spoke with his counterpart @JZarif today: Germany is very concerned about possible escalation. We are prepared to work intensively together with European partners through our channels of communication to promote de-escalation.

The crisis triggered by the U.S. drone attack against the IRGC commander shows little sign of escalation in the medium term, unless President Trump would decide to activate the option he once misguidedly accused President Obama to pursue for domestic political reasons.

As a final thought, what is also important to note is that social media-based crisis analysis could really benefit from AI integration so that strategic advice concerning the virality, signalling and the contagion aspects of the crisis could be offered in real-time and as accurately as possible.

[2] The spike of positive sentiments related to #WWII on Jan 6-7 are caused by humorous memes.