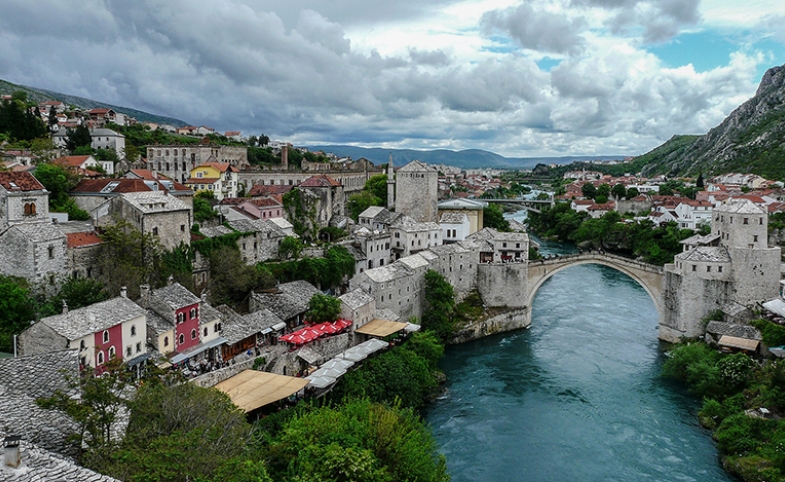 Note from the CPD Blog Manager: This is part two of a two-part series on soft power in the Balkans during the COVID-19 vaccine rollout. Read part one here.

In a report for the Brussels-based think tank Breugel, Michael Leigh, former head of the EU’s enlargement program in its heyday, confirms that all the outside powers mentioned in part one of this blog post—Russia, China, Turkey the UAE—are taking advantage in strategic, tactical and propagandistic fashion of the European Union’s inability to deliver the future it has long promised to this area.

Now, Hungary and Serbia—close allies as we have seen—are taking up the cause. Negotiations for all the Balkan nation-states to join the Union started in 2003; only Slovenia and Croatia have succeeded. He notes "enlargement fatigue" has set in, and powers such as France and the Netherlands openly resist progress, mostly out of fear of another influx of Muslim immigrants and distaste for the governance problems and openly authoritarian political culture on display now in many corners of the region, including Slovenia, long considered a success and a model of integration.

In March foreign ministers from nine EU countries called on the Union “to take a strategic look at the Western Balkans,” Leigh reports, quoting the official statement. They asserted that the pandemic had exacerbated existing trends with their geopolitical implications and that “other actors are ready to step into regional affairs, often at our expense.” Only after long hesitations and alarmed prompting from the European Parliament was the EU Commission able to announce in April the dispatch of 650,000 Pfizer doses for the protection of health workers and other vulnerable people.

The EU had finally suspended its veto on vaccine exports to the Western Balkans in March but even then made clear that it was counting on the UN-WHO COVAX vaccine project for less developed countries to do much of the work. But as the alarm bells rang ever more loudly, in May the governing European Council declared that it would take up again the challenge of admitting Albania and North Macedonia to the Union, imploring Bulgaria—an EU member state—to drop its veto on the latter. When this effort failed, the EU allowed Albania to proceed with its application, prompting an effusive charm offensive by the Albanian Prime Minister, Edi Rama.

Meanwhile official sources claimed that the EU had spent more than €3 billion in aid to the area since April 2020 and was anxious to support connectivity and climate change policies in the region. But what did Brussels have to show for its effort? The EU-supported Regional Cooperation Council (RCC) based in Tirana—the Union’s only (semi-official) public diplomacy operation on the ground—reports that its surveys show that 77% of Western Balkan citizens support regional cooperation, and that 62% believe that EU membership would be positive economically. Among business opinion, 72% would prefer to trade with the EU. But an outside specialist at the RCC's June 2021 meeting pointed out that none of the Balkan candidates for EU membership had been invited to the Union’s grandiose "Future of Europe" conference, not even as observers.

A month later the RCC organized a special meeting, titled "The Spread of Disinformation During the Pandemic and Its Impact on the Western Balkans." The mood among the specialist media experts, members of regulatory agencies, journalists and diplomats assembled online was gloomy. All pandemics in history had been accompanied by the wildest rumors about their origins, said the discussants, but this one was special since social media platforms enabled fake news, disinformation and rumors to be planted systematically and on a vast scale. New portals could spring up anywhere with unknown backers, no regulation and resisting even basic registration.

An "acute hybrid security threat" prevented governments from acting swiftly and effectively to convince people to get vaccinated, said the RCC witnesses: surveys showed that 73% of local populations believed the COVID danger to be exaggerated. Trust in institutions, elected representatives, scientific evidence and even medical services had been severely undermined, not to mention faith in the EU. Mainstream media had always been weak, and now they were under assault on all sides. In such a situation the EU’s new Digital Services Act looked remote and inadequate and would of course only apply to existing member states. Robust, trans-regional cooperation was needed, said a speaker from Montenegro, so that media literacy could be transformed and basic values such as factual truth, transparency, accountability, respect for legality and democracy itself could be re-launched. But the only hope for regulating the great American digital platforms, said Slovenia-based media expert Marko Milosavljevič—mentioned in part one of this blog series—lay in the European Union, the one target that united all the information subversives.

But the next EU summit on the Balkans is not due until October 2021. European Policy Centre authors write, "[A]s the EU dithers, it’s China, Russia and Turkey that are stealthily moving their pawns forward." But it was very noticeable that among the 23 speakers and moderators at the RCC conference on disinformation, not one mentioned any of these powers. All the blame was placed on local operators.

The stakes in all this have been explicitly spelled out by a Yugoslavia-born member of the UK House of Lords, Baroness Arminka Helić, in a June article for Politico.eu:

"[A]cross the region, progress is slipping and instability is growing ... and the EU and the West are doing little to prevent it ... In Bosnia-Herzegovina, for example, threats of secession and violence are now a regular feature of politics. Genocide denial is rife. And foreign politicians, from the Montenegrin prime minister to the Russian foreign minister, openly undermine Bosnian sovereignty."

Helić insists, "[An] effective strategy to counter growing Russian and Chinese influence, the revival of nationalism and the increasing risk of conflict is long overdue."

But even Helić does not explain what this strategy would look like. She must surely know that EU and NATO membership alone are no guarantee of civil progress and cannot ignore the fact that the EU’s public diplomacy has always been extremely weak, everywhere, not just in the Balkans. The vaccine saga has aggravated this situation, and the Orbáns and Vučićs of the region are radiant with self-satisfaction. They are convinced that they can play the long geopolitical game or the short vaccine version on their terms.

Hard or soft power instruments of influence? For now it looks like the local leaders are most free to choose.

Photo: Stari Most in Bosnia Herzegovina by JLB1988 via Pixabay

Note from the CPD Blog Manager: This is part one of a two-part series on soft power in the Balkans during the COVID-19 vaccine rollout. Part two will focus on European powers. Read part two here. In North Macedonia, a...