Home|Spreading the Word: Country-level Patterns of Retweeting the IMF 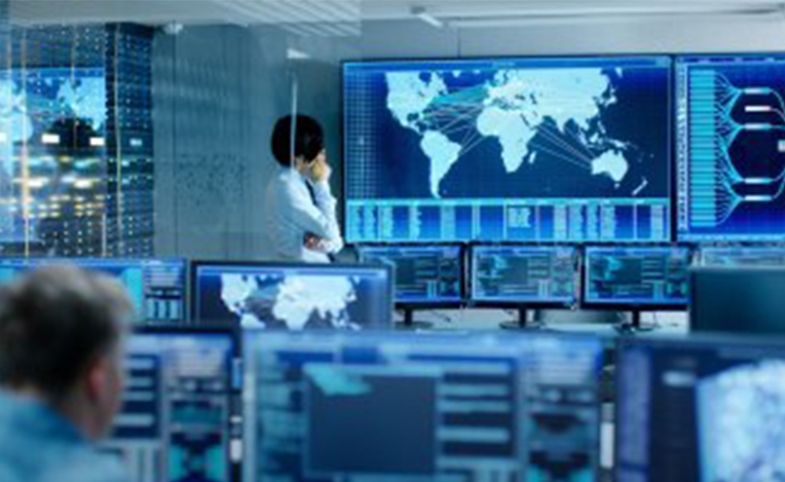 The IMF’s main Twitter account (@IMFnews) has over 1.8 million followers, and the Fund uses this account to communicate information at the global, regional and national levels. Are there country-level factors that shape how Twitter audiences respond to the IMF? To answer this question, I focus on the IMF’s tweets on national-level issues by studying the IMF’s tweets on bilateral surveillance, which is an annual process by which the IMF reviews member country economies and makes policy recommendations.

This work builds on a larger CPD Research Fellowship project for the USC Center on Public Diplomacy in which I studied the entire Twitter output of the IMF in 2018 to better understand what digital diplomacy looks like in practice. There are certainly different avenues to study patterns of retweeting, but the evidence suggests that the same factors that shape whether the IMF tweets about a country also affect the amount that this work is retweeted.

Just as the IMF tends to focus its Twitter attention on larger economies, audiences are more likely to share information about those very same countries.

I sorted over 2,100 tweets by type, and out of those, I focus on the 209 tweets that are about the Fund’s bilateral surveillance of 45 different member countries. I counted the number of retweets for each IMF tweet and averaged those together by country. The total number of retweets ranged between 5 and 102 with a mean of 25.4. Averaged by country, they ranged from 7 to 49.5 with a mean of 23.2. Variations in this count of country-averaged retweets, then, is the outcome that we want to explain through statistical tests.

In the table below, I estimate a pair of regression models. The two main variables are gross national income and population, which are estimated in separate models because they are highly correlated with one another. I include two control variables here. First, I include a dummy variable for whether a country has English as an official language taken from the CIA World Factbook. Though the Fund tweets in different languages, I only tested tweets in English. I also include a variable for the extensiveness of internet penetration in the country to measure variations in the potential online audience for tweets taken from the World Bank’s World Development Indicators.

These results are in the table below. 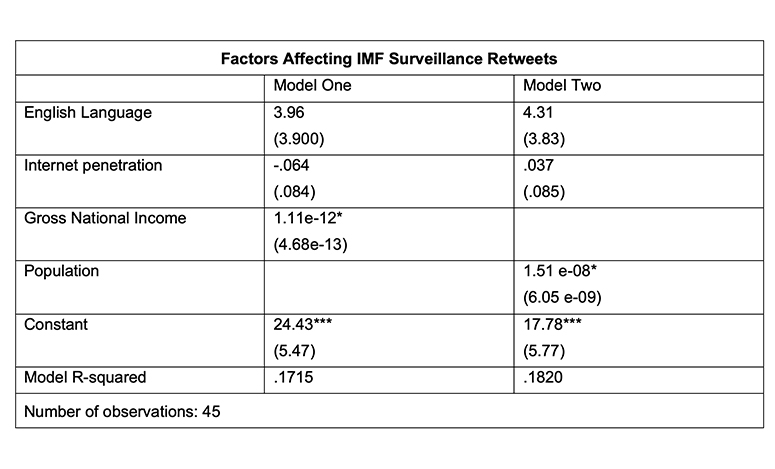 This model suggests that countries with high levels of Gross National Income and Population are more likely to have their tweets retweeted. And it should be noted that these results hold after controlling for internet penetration and whether or not the country has an official language of English. These two variables are also significant because they are factors that affect whether the IMF tweets about the country in the first place.

Just as the IMF tends to focus its Twitter attention on larger economies, audiences are more likely to share information about those very same countries. More work can be done here, as there could also be unobserved differences between countries not captured in the table above, including whether the country is borrowing from the IMF, as well as variables such as the literacy rate.

There is still more to learn about how well the IMF’s messages are disseminated on social media. Posing research questions in different ways can shed further light. Since the IMF’s country coverage of surveillance is not constant, we can exploit that within case variation to better hypothesize links between the content of tweets and the number of retweets that each gets. All of the IMF’s tweets on surveillance include multiple links and an image. It could be the case that differences in the content of the tweets or subject matter could affect the number of times it gets retweeted.

Finally, there is still more to do to learn about the audience who is doing the retweeting. The commonsense understanding of IMF surveillance is that like-minded interlocutors help to amplify the IMF’s message domestically. But we can learn more about who the folks doing the retweeting are, and this will help us to better understand the extent to which digital diplomacy turns information into influence.

The Center is pleased to announce the addition of three new CPD Research Fellows: Yoav Dubinsky from the University of Oregon, Elisabeth King from New York University, and Shearon Roberts from Xavier University of...