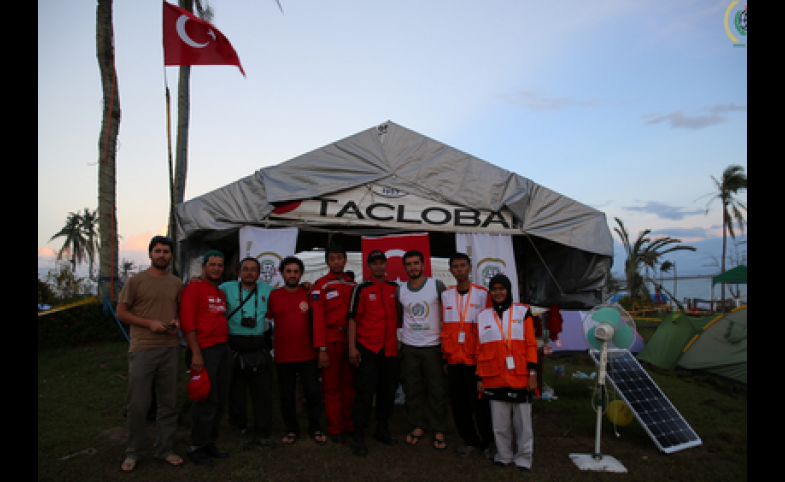 As an emerging middle power Turkey has been actively seeking to exert influence, specifically in the Middle East and in Africa through means of public diplomacy. Educational exchanges, cultural institutions, media outputs, international conferences, infrastructure aid, and humanitarian assistance are Turkey’s most notable governmental and non-governmental public diplomacy tools.

The Disaster and Management Presidency (AFAD), Turkish International Cooperation and Development Agency (TIKA), and Turkish Red Crescent (KIZILAY) are amongst the governmental institutions that provide, organize, and distribute humanitarian aid such as tents, blankets, food packages, sanitary kits, and many others. Besides providing shelters TIKA sponsors infrastructure development such as buildings, hospitals, schools, roads, sanitation projects, agricultural projects, and cultural restorations. There are quite a number of active NGO’s that work in coordination with The Disaster and Management Presidency (AFAD) and the Turkish Red Crescent (KIZILAY). These NGO’s such as Deniz Feneri Derneği (Light House Foundation), Cansuyu Charity and Solidarity Foundation, Kimse Yok Mu Turkish Non Governmental Organization, and İHH (The Foundation for Human Rights and Freedoms and Relief) offer humanitarian assistance as well as infrastructure projects and healthcare to countries in Africa, Middle East, Asia, and the Balkans.

Zaharna argues that one of the key aspects of public diplomacy, relationship building, can be conducted through development projects, which is an expression of the ties between two entities. Such a relationship can be established and improved by businesses, humanitarian assistance, and through the work of NGO’s. As a matter of fact, that is what Turkish institutions are doing, resulting in trust between the donor and the recipient and a favorable country image for Turkey. Perhaps the healthcare assistance such as cataract surgeries, building hospitals, educational work, and orphan care are major contributors in building long-term relationships with these communities.

Through these institutions and organizations, Turkey is not only trying to establish herself as a humanitarian assistance provider, but also as a mediator in regional conflicts by operating with regional partners and gradually building trust through local partners. One can argue that Turkey is providing an example of niche diplomacy through humanitarian value-based policies. Indeed, Turkey’s humanitarian rhetoric and value-based policy resembles the notion of ‘niche diplomacy’ that is commonly associated with middle powers. Good will supporting good works and performing good deeds pay off in terms of international prestige where a country is rewarded for its goodness.

Turkey has been seeking to expand its sphere of influence during the last decade and realizing that public diplomacy can play a part in improving Turkey’s soft power. Together with the nation’s economic success, Turkey has focused on becoming a major player in humanitarian assistance. Turkey’s humanitarian assistance efforts can be considered long-term relationship building public diplomacy tools aiming to develop Turkey’s soft power in those societies. Humanitarian assistance also establishes long-term connections, which can eventually help Turkish businesses to tap into emerging economic markets and pursue foreign policy objectives.

As Turkey has been practicing a more active foreign policy, civic engagement and humanitarian assistance are playing a large role in contributing to this policy change. In this sense Turkish policy makers have taken humanitarian responsibility as a priority where a humanitarian rhetoric meets with value-based policies. With that Turkey has been involved in regions that were previously beyond its reach. In the last several years Turkey has offered a helping hand to Kenya, Niger, Somalia, Sudan, Mali, Bangladesh, Afghanistan, Pakistan, Indonesia, Uzbekistan, Myanmar, Philippines, Egypt, Yemen, Lebanon, Tunisia, Gaza, Iran, Syria, Albania Bosnia, Bulgaria, Kosovo, Macedonia, and Montenegro where civil unrest, conflict, famine, and natural disasters prevail.

One of the most notable relief campaigns for Somalia and Myanmar was introduced by AFAD as well as various NGO’s. In numerous African countries, water wells are being built to provide clean water, a necessity in those parts of the world where people are faced with diseases due to the lack of clean water. Cataract operations are an ongoing work in Africa. Monetary donations for food packages and Eid donations show major increases during the month of Ramadan and Eid al Qurban.

The Palestinian question has been the center of attention for the NGO’s most notably after the Operation Cast Lead in 2008. While the NGO’s sent food packages and monetary relief along with hospital building constructions; governmental institutions have been assisting with agricultural, educational, and health projects. Besides, both governmental institutions and NGO’s are working in establishing the self-sustainability of these communities by offering career building and continuing education courses.

In the case of the Arab Spring, besides aid being offered by the state, Turkish NGO’s contributed a variety of monetary and emergency humanitarian assistance to the MENA communities. For instance, İHH (The Foundation for Human Rights and Freedoms and Relief) was in Libya only two days after the revolts bringing in 5 doctors and 19 emergency assistance personnel. İHH worked in cooperation with Turkish Red Crescent to establish soup houses, build tent camps, and provide clean water, baby formula, and blankets. İHH also assisted in the evacuation of the Turkish citizens working in Libya at the time of the uprisings. Additionally, in Yemen İHH distributed Ramadan donations. More importantly as a part of NGO level mediation the İHH hosted the regime opposition at the headquarters in İstanbul. In Tunisia the foundation offered health care services during the transition process.[1] Deniz Feneri Derneği (Light House Foundation) delivered food assistance to Yemen by distributing 2,000 food packages to families and 1,000 stationary packages to students. During the uprisings Deniz Feneri sent emergency assistance packages worth $205,496 to Libya.[2] Cansuyu was also at the Libyan-Tunisian border offering emergency assistance with Tunisian partners El-Rahme and Taavun Associations.[3] Kimse Yok Mu? Association was also at the Tunisian-Libyan border to help Libyan refugees delivering Ramadan donations such as monetary assistance, food packages and health care.[4] After the revolts following immediate humanitarian assistance Turkish NGO’s and governmental agencies such as TİKA (Turkish International Cooperation and Development Agency) have been working diligently to maintain the self-efficiency of Tunisia, Egypt, Libya, and Yemen through infrastructure work, restorations, cultural, and educational development.[5] Through such work on re-constructing of the post-awakening in the MENA region, Turkey has been pursuing long-term commitment to the stability and establishment of a new Middle East. In fact, while responding to immediate crises Turkey has also been concerned about contributing to the creation of a better human and stable global order.

The ongoing Syrian civil war has been a testing ground for Turkey’s humanitarian assistance and value-based policies. The influx of over 500,000 Syrians over the course of three years created a massive need for aid mobilization. Since 2011, Turkish NGO’s as well as the government have taken immeasurable efforts to provide humanitarian assistance to Syrian refugees fleeing the civil war to a safer zone in Turkey. On a governmental level, AFAD has erected 14 tent cities, 1 temporary shelter home, and 6 prefabricated housing camps in various Turkish cities, hosting over 200,000 Syrian citizens with several new camps currently in construction for the Syrian Christians. TİKA has provided healthcare for the Syrian refugees in Lebanon. Syrian relief efforts by the NGO’s range from food packages to sanitary needs, baby formula, educational supplies, clothing, tons of fresh food, bread, and dairy products. However, Turkey’s humanitarian involvement in the Syrian crisis deserves further attention that will be elaborated on in upcoming blog entries.

Turkey is working on becoming an active participant in international humanitarian assistance and has established itself as the fourth largest donor state this year. The debate on whether humanitarian assistance can be considered selfless acts of goodwill or public diplomacy continues. Through emergency aid, infrastructure assistance, and providing healthcare, which are all scarce in some regions Turkey it is expanding the nation’s soft power. It looks like as Turkey’s value based policy rhetoric is having a significant impact on the global goodwill.

How Can Turkey’s Foreign Aid Be More Visible?

In a recent blogpost on Turkey's humanitarian aid, Evren Eken discussed the domestic component of Turkey’s humanitarian aid efforts and the motivations behind it. I would like to expand on Eken’s discussion in this blog....