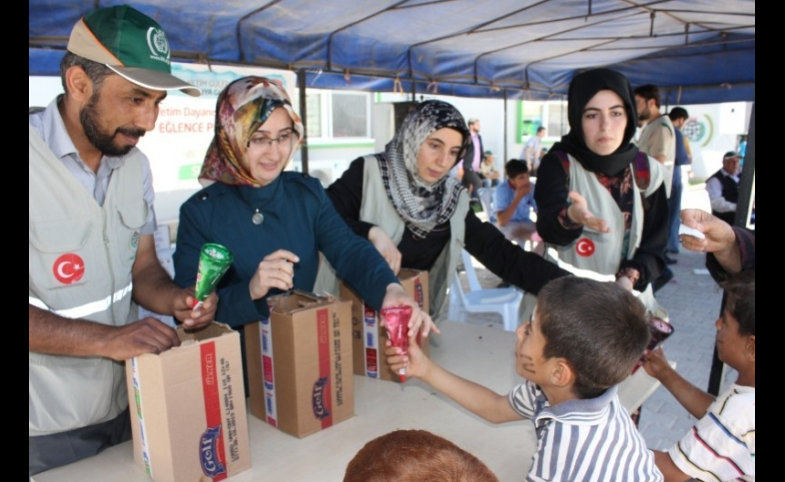 Non-government PD is an essential part of the new public diplomacy. The rise of Turkish relief NGOs is owed to increasing economic development, a flourishing democratic sphere, and growing foreign policy ambitions. Currently the most popular and active relief NGOs in Turkey have Islamic roots and are active in the country’s policymaking and soft power.

The evolution of Turkish NGOs dates back to the early 1990s, a time when the military still had an overwhelming influence on politics. During that period, Turkey experienced political turmoil symbolizing a buildup of decades-long friction between Islamist and secularist groups.  As a consequence, politics or parties with Islamic tendencies had minimal power in the state system, so they built grassroots organizations to establish political and economic power. The rise of relief NGOs in Turkey therefore corresponds with the containment of Islamic movements in the socio-political sphere and their re-emergence in contemporary Turkish politics. Their prominence on the global scene today can be credited to Turkey’s economic progress, foreign policy ambitions and to the rising demand from Muslim and non-Muslim communities in Africa who have felt that their resources have been exploited in the past by colonialists. This public perception and mistrust towards Western organizations ha been providing a safe-haven for Turkish faith-based NGOs, underscoring the role religion plays in public diplomacy.

First, I’d like to discuss the faith-based business organizations that have a stronghold in Turkey’s proactive foreign policy before delving into the faith-based NGOs. Turkish NGOs that are actively involved in economic development and foreign policy predominantly have a conservative characteristic, but it would be an overstatement to call them Islamic. With the introduction of liberal economic policies in the mid 1980s and early 90s, and with the rise of the current AK Party government, NGOs have found a more fertile ground to expand their influence. Business organizations, have almost been acting as diplomats improving bilateral economic, commercial, and social ties since the 90s. MÜSİAD (Independent Industrialists’ and Businessmen’s Association) was established in 1990 to serve as a counter to the older establishment TÜSİAD (Turkish Industry and Business Association d. 1971). TÜSİAD represents the older, traditional secular Turkish establishment, while MÜSİAD represents a more Islamic conservative background, which is occasionally dubbed the ‘Anatolian Tigers’ or the rising economic powerhouse of conservative Anatolian capitalists. MÜSİAD now serves in 60 countries at 143 locations, many of these being in Africa and Asia. Another organization, TUSKON (Turkish Confederation of Businessmen and Industrialists), having close ties to the Hizmet/Gülen movement, was established in 2005 and has four international offices with various business ventures in Africa. TÜSİAD’s few international offices are mainly located in Europe and one in China.

Even the location of foreign offices of more recent business associations is an indication of how the new Turkish foreign policy and businesses are interrelated. Both MÜSİAD and TUSKON have played a key role in developing Turkey’s economic and diplomatic ties with Africa. ‘Anatolian Tigers’ or the new bourgeoisie are influencing foreign policy by their economic engagement, becoming key denominators of Turkey’s foreign policy. Hence, these NGOs are playing a central role in Turkish foreign policy, illustrating how a shift in domestic power can impact foreign policy. It can be argued that the presence of business NGOs in the African continent and increasing trade volume have had a catalyzing effect on the expansion of the Turkish diplomatic corps in countries where Turkey previously had no representation. To illustrate, by 2013 the total number of embassies and consulates reached 35 and the total trade volume exceeded $12 million by the end of 2012.[i]

Together with the AK Party’s multilateral foreign policy approach, the faith-based NGOs have become one of the key players in shaping Turkish policies. NGOs have highlighted a new instrument in Turkey’s foreign-policy toolkit, humanitarian aid and development assistance. Several of the most active NGOs in this category are İHH, Cansuyu, Deniz Feneri, and Kimse Yok Mu. These organizations are involved in offering emergency assistance and relief work domestically while also expanding their visibility on the global scene, predominantly in Africa, Asia and the Middle East. Besides emergency relief, they provide the tools for self-sustainability such as agricultural projects, workshops for women, crafts and various other instruments to make a living that aims to diminish the dependency on foreign assistance. Besides these long-term aid incentives, the faith based NGOs provide development aid such as building roads, water wells, hospitals and schools that create a more progressive infrastructure as well as building long-term relationships with those communities in need.

"One could argue that faith-based NGOs have found fertile ground to expand their power domestically as well as their activities internationally due to the convergence of Turkey’s foreign policy ambitions and domestic shifts in the representation and re-emergence of Islam within the political sphere."

The work of these faith-based NGOs focuses on goodwill and charity, giving utmost importance to the notion of benevolence, a main tenet of Islam. It can therefore be argued that the NGOs build on the sacred trust inherent in benevolence, enhancing the social credibility of these organizations within Turkey and within host societies. With the advantage of a narrative that slants towards a faith-based understanding of goodwill and benevolence, these NGOs have become mobilizers of domestic civic engagement as well as one of Turkey’s main PD actors. Indeed, faith-based NGOs have dominated the civic engagement sphere particularly with the rise of the ruling AK Party, reflecting the drive for social inclusion amongst conservative circles. Their support base has expanded as has their sphere of global influence and market penetration, in harmony with Turkey’s aim to become a global actor in humanitarian assistance and humanitarian diplomacy. One could argue that faith-based NGOs have found fertile ground to expand their power domestically as well as their activities internationally due to the convergence of Turkey’s foreign policy ambitions and domestic shifts in the representation and re-emergence of Islam within the political sphere. The support base for these NGOs indicates conservatism in businesses linked with MÜSİAD and TUSKON as well as devout Muslims, indicating a visible connection between conservative businesses, pious masses and humanitarian assistance. Hence, faith-based NGOs have become convenient tools of policy-making and strengthening the dimension of the active foreign policy.

The Human Rights and Aid Organization (İHH) which received global recognition with the Mavi Marmara flotilla incident,[ii] is an example of the interaction between politics and faith-based NGOs. Ever since, faith-based organizations have been included in the decision-making process and in mediation efforts in conflict regions.

These NGOs have also demonstrated their impact on Turkey’s foreign policy priorities in the case of Somalia, where faith-based NGOs rushed to help Somalians facing famine and disease at the height of the 2011 drought crisis. Shortly after the efforts of NGOs, the Turkish government also took steps towards recognizing the Somalian tragedy and gained the upper hand in doing so. As a result, Turkey got involved in peace-building efforts in the Somalian conflict.

As such, Turkey’s humanitarian assistance has become part of its foreign policy toolkit and a way to draw global attention to humanitarian causes. While its faith-based NGOs can be categorized as faith driven organizations they do not cultivate a particular faith. The irrefutable connection between faith-based NGOs, conservative business and policy, calls into question whether these civic engagement initiatives can be entirely considered as non-government initiatives or faith-driven organizations that have the blessing of the policy makers. The ultimate dilemma of NGOs and their connections with governments has always been a global issue and it remains the same for faith-based NGOs. Nonetheless, as supranational entities, Turkish faith-based NGOs have so far succeeded in not only providing a substantial amount of global assistance but also in harnessing a positive image in recipient countries, strengthening Turkey’s soft power and serving as agents of public diplomacy.

[ii] The violent clash on the MV Mavi Marmara organized by the IHH between its passengers and the Israeli Defense Forces in May 2010.

Mehmet Arda, a scholar at the Centre for Economics and Foreign Policy Studies (EDAM) in Istanbul, has published a new article. His piece, Turkey—The Evolving Interface of International Relations and Domestic Politics,...