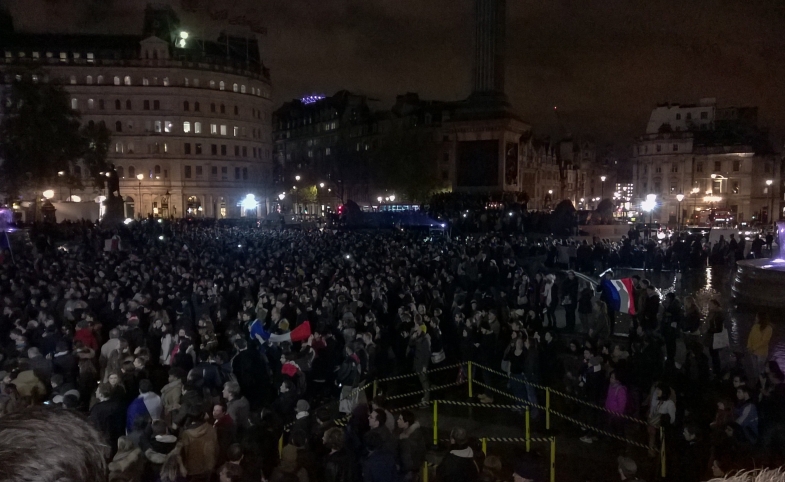 When Will It End?

A horrific terrorist attack, then a sharp military response. As usual, the former was more effective than the latter.

Some politicians demand a more vicious counterthrust. “Boots on the ground” has a nice John Wayne-like ring to it, but I wonder how many of these politicians are ready to escort their children or other relatives to the nearest military recruiting office and then send them off to Syria.

The military option is becoming even less palatable as some of our Arab “allies” edge away from fighting the Islamic State and instead direct their expensive American-made weaponry at poor, battered Yemen. The United States is once again left to do the heavy lifting, bombing the Islamic State (IS) and relying on Kurdish troops to keep pressure on the enemy. At best, this will produce a stalemate; IS has had little problem recruiting new fighters to replace those who have been killed.

Meanwhile, publics around the world are left to try make sense of senselessness. Killing civilians in Beirut or Paris is terrorism in its purest sense; it creates widespread fear about where the next slaughter will happen. It is important to remember that for every person killed in such attacks, millions are frightened…terrorized. We endured forty years of fear of “mutually assured destruction” during the Cold War, and we should not face another version of that. It is no way to live.

The distance between a murderous terrorist and an ambitious student is vast, but to maintain that separation we need to connect with a generation of young Muslims who see much of the world as hostile to them and their faith.

Dealing with IS requires applying military pressure in Syria and Iraq, but more important is stopping the flow of recruits. Some of these young people are psychopaths, but many believe they are doing the Lord’s work in building a caliphate. These are the ones who can and must be reached. The perversion of Islam that IS represents must be addressed primarily by Muslims themselves, but such efforts should be supported by public diplomacy emanating from non-Muslim countries.

There is no sure-fire fix, but among the most effective long-term programs for redirecting youthful energies are educational exchanges. After studying in the United States, students are likely to return home with a greater understanding and appreciation of the American people and their values. Today, nearly a million foreign students are enrolled in U.S. colleges and universities. About 300,000 of them are Chinese, but, other than India, most countries with large Muslim populations are far down the list. Students from those countries should be more actively recruited.

While the number of foreign students studying in the United States grew by 10 percent last year, the total of Americans studying abroad grew by only 5 percent, to 300,000. Most of these are in Western Europe, and almost none of them study in a country with a significant Muslim population. Increasing this figure would also be helpful, as every U.S. citizen studying overseas can be a valuable ambassador, pushing back against the myth of a malign American.

The distance between a murderous terrorist and an ambitious student is vast, but to maintain that separation we need to connect with a generation of young Muslims who see much of the world as hostile to them and their faith. Education provides a logical means for doing so.

Results from this approach may take decades to become fully evident. This public diplomacy is just part of the answer. The supply of money and weapons to IS must be blocked and the organization’s leadership targeted. This will be particularly difficult because Syria is no longer a cohesive nation, and in some areas IS is the government, providing a relative degree of stability. Outlaws are running an outlaw state.

So, when will it end? For the foreseeable future, there will always be someone willing to wrap himself or herself in a dynamite vest to kill and die. Good intelligence work can find many of these before they act, but broader strategy must aim to reduce their ranks by relying on elements of both hard and soft power. The road is long.