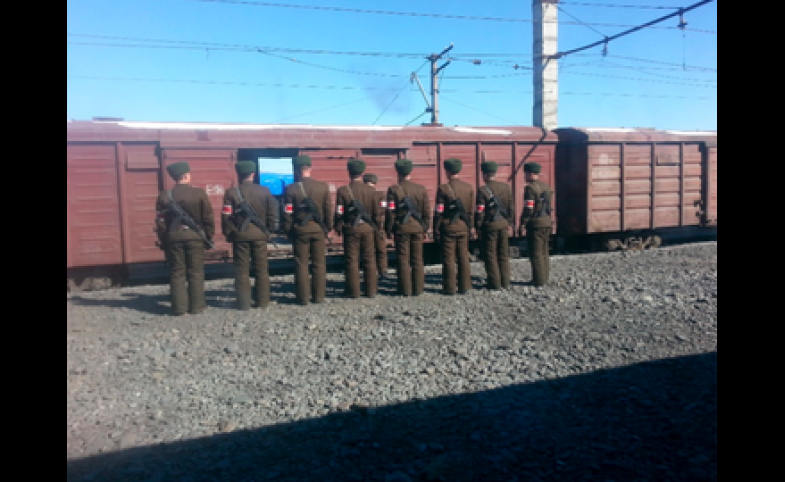 I have traveled to dozens of countries, but my trip to North Korea this past February was the most unforgettable experience of my life. My plan of going to a country with a “totalitarian” regime, known for its chronic famine and political oppression, intrigued many of my peers in China. They were surprised by my “unusual interest,” asking “Why North Korea?” I replied, “Because it is a different world; because I see similarities between China and North Korea; because as a Chinese citizen, I have the privilege to travel to North Korea easily.”

As traveling freely throughout the country is still forbidden, I went there with a tourist group of ten people. Except for a British man named Steven, the rest were all Chinese nationals. The price for Steven was more than 800 hundred dollars for the four-day trip, while the Chinese could receive a “friendly-nation” discount of more than 50% off. 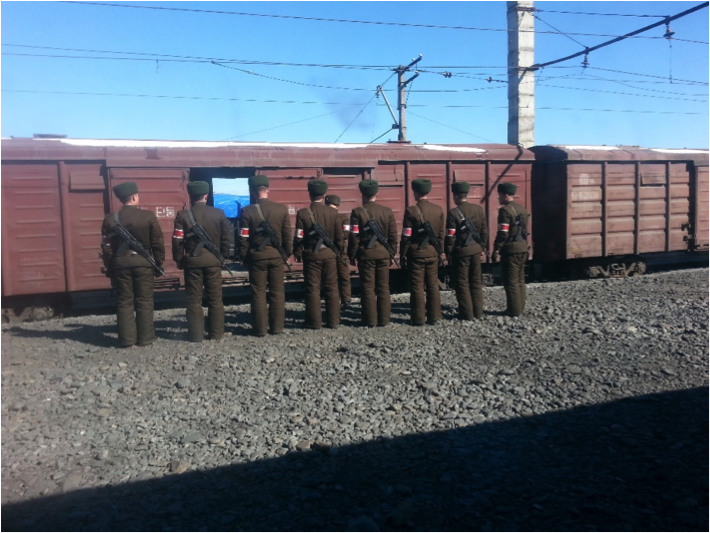 North Korean soldiers at the border
Taking photos of soldiers can be risky. I was photographing the soldiers at a barricade when our tourist bus was blocked and my camera was taken away. After an hour of negotiations with the soldiers, the guide returned my camera to me with ten photos deleted. 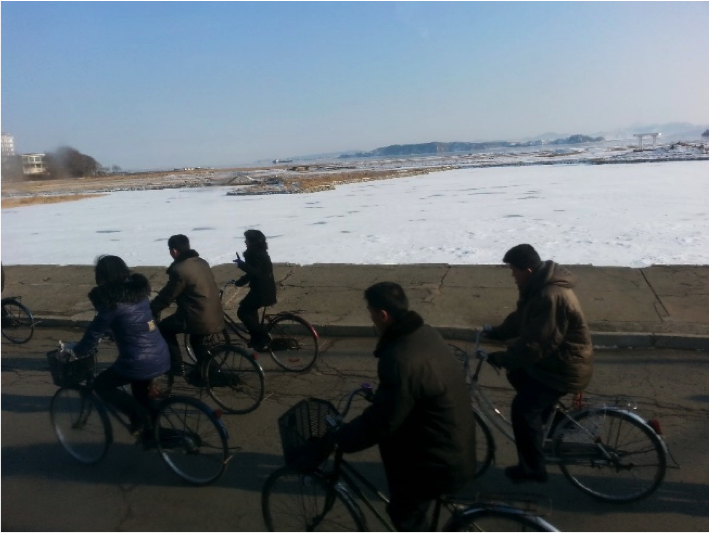 North Koreans riding bicycles
Bicycles are the prevailing means of transportation in North Korea. It was rare to see automobiles beyond Pyongyang and its suburbs.

Unlike other countries, tourism in North Korea is fully controlled by the state. Our schedule was entirely determined by the North Korean authority. As I expected, political elements, like visiting the statues of Kim Il Sung and Kim Jong-il, were an important aspect of the trip.

Throughout the trip, we were accompanied by three North Koreans: one female guide, one male driver, and one pseudo male-guide, who was likely a government agent. The man shadowed Steven from the moment we arrived in Pyongyang, asking him tons of questions. An important function of the male guide was to keep everyone in his sight. So long as you were missing or simply showing such intention, he would be the one who wiped out that thought from your mind. For example, the first night after we arrived, we attempted to sneak into the darkness of Pyongyang after dinner. It ended in failure. We were stopped by the male guide and were not allowed to leave, due to “safety concerns.” This appeared convincing at the first glance, as we were told, “March will be the time for the parliamentary election and a lot of secret police are on the roads now. You don’t have your passport, so you may be identified as a spy.” However, this tour guide was the very man who took away our passports in the first place. 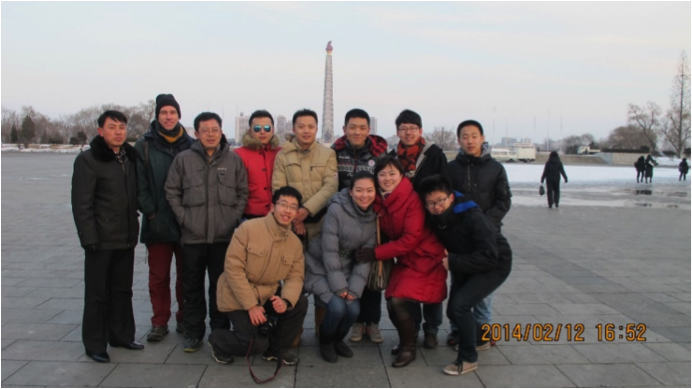 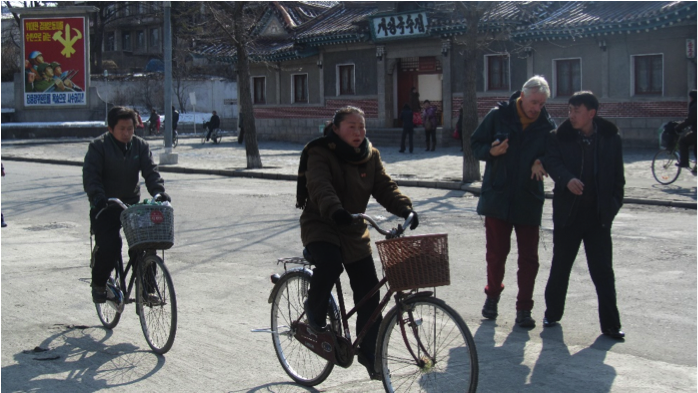 Steven talking to the male guide.
One day after lunch, Steven left the group secretly to take a stroll. He was soon discovered by the male guide and brought back to the group.

The core goal of North Korea’s “tourism diplomacy” is to deliver a positive image of the country.

This is why we were placed at the Yanggakdo International Hotel, one of the two top-class hotels in Pyongyang, and were served top-quality meals. Even the female guide conceded that “if the food you eat is scored at five, to be frank, what we eat every day is around 3.5 to 4.” That grade may be slightly inflated, considering that her salary, about 70 dollars per month, is much more than the city’s average 20 dollars per month [2]; and, as the capital of the socialist state, Pyongyang residents enjoy a much higher living standard than others in the country.

Because image is everything to the North Korean tourist officials, the waitress in the hotel as well as the female transportation police were stunningly beautiful. They represent the national image of North Korea to foreign tourists, and are on the frontlines to showcase the “charm” of a socialist system. 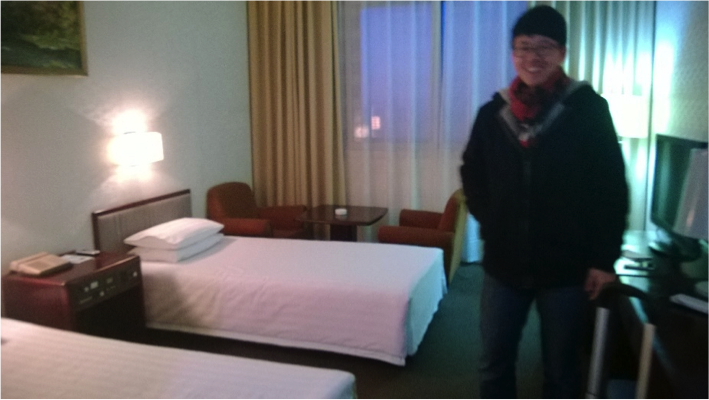 My cousin in our room at the Yanggakdo International Hotel.
From the television to the air conditioner to the electric kettle, almost every electronic device in the room was made by Chinese companies. 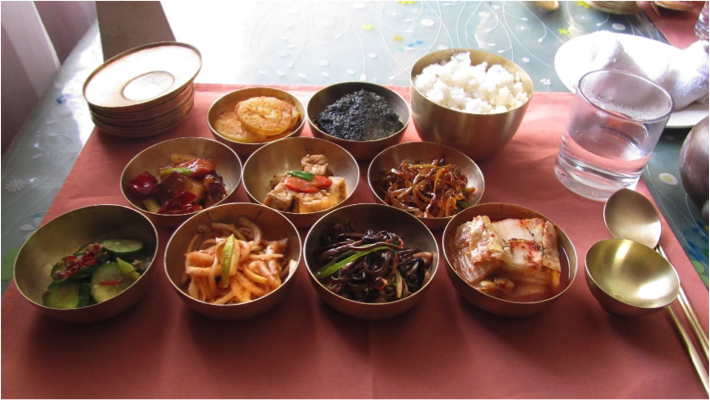 The finest meal we had in North Korea.
For a meat lover like me, the proportion of vegetables was often too high in North Korea. The amount of meat in each meal appeared to follow a standardized quota. For example, each person is assigned one piece of chicken and one slice of fried fish for breakfast. 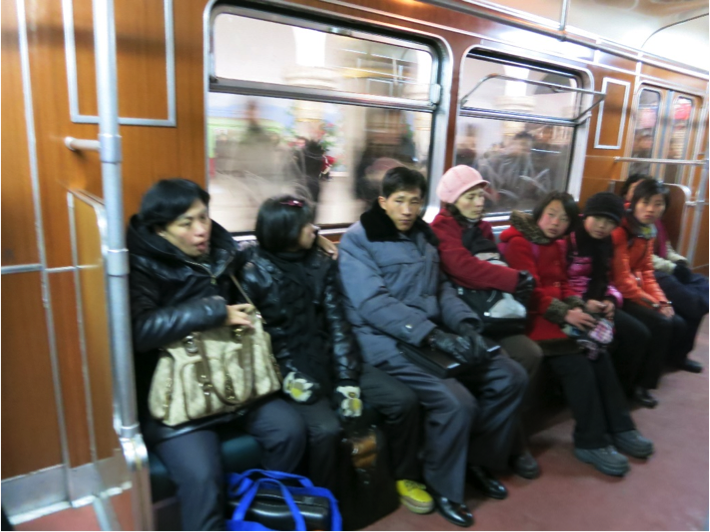 The bustling metro system in Pyongyang.
Built in the 1960s, the Pyongyang metro is one of the cheapest in the world, which only cost around 5 cents. 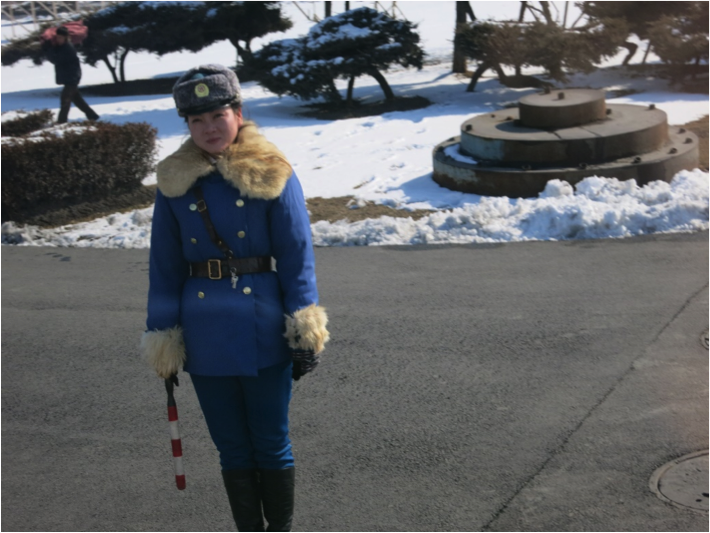 The female transportation police in Pyongyang.
This is a group of young and beautiful North Korean women, who were selected under rigorous criteria and are paid high wages, according to the female guide. 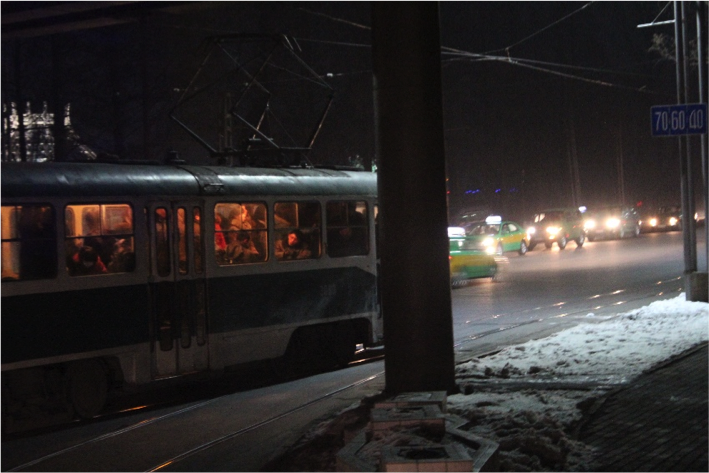 Pyongyang at night
An outdated trolley and two comparatively modern taxis (imported from China) are shown here. Because North Korea is unable to manufacture these public transportations domestically, a variety of vehicles made in other countries, from as early as 1960s, can be seen in the streets. According to the female guide, in Pyongyang, there is virtually no night life other than watching TV or playing chess. There are few streetlights and we experienced power outages couple of times during our stay.

However, the sad truth is that even though North Korea tries to impress tourists with the best resources available, we were still not impressed; the hotel we stayed in, the best in North Korea, is only comparable to a high-standard motel in the United States. The food we ate was no better than a decent barbecue in the “Korea Town” neighborhood near my home in Beijing.

A more disturbing problem facing North Korea’s “tourism diplomacy” is its lack of credibility. As Walter Lippmann wrote nearly a century ago, most people don’t choose between true and false messages, they choose between trustworthy and untrustworthy messengers. [3] North Korea is indeed an untrustworthy messenger that intermittently spreads false messages. This leaves the audience very much deaf to any of their messages.

The willingness to be self-critical is very important in building credibility, but criticizing itself is perhaps the last thing North Korea would do. The messages peddled by our North Korean guides followed a same pattern: defaming opponents while glorifying its supposedly omnipotent leader. For example, during our visit to the West Sea Dam, we were shown a documentary film which stated that Kim Jong-il had, “despite being occupied by myriad affairs, inspected the construction of the dam twice in a five-year span.” Later, I asked the guide, “How many workers died during the construction?” She replied, “Too many.” Asked whether statistics on the deaths were available, she replied, “Yes. But they are not available to the public.”

Worse still, North Korea also delivers false messages and distorts facts. The Korean Peninsula was claimed to have been “liberated by Kim Il Sung” in the 1940s, but was in fact liberated by the Soviet Union when they defeated the Japanese Army. Also, the Korean War was labeled “a counter-attack to South Korea’s offenses”, but it is generally believed that it is North Korea that provoked the war. [4] And within three days, its troops, fully mobilized and equipped, had captured South Korea’s capital Seoul. In a contest of credibility, the “tourism diplomacy” as done by North Korea can hardly win the hearts and minds of global audience, who are increasingly erudite and critical.

On a deeper level, the failure of North Korea’s “tourism diplomacy” is rooted in the nation’s inability to understand the tastes of foreign publics. The time is gone when audiences were solely focused on the economic achievement of a foreign nation. From the top-class hotels to the brand-new tourist bus, North Korea had been wrestling to showcase the point to us throughout the trip. The current criteria is based on whether a society is free and just, or conversely, repressive and manipulative. Before returning to China, some North Korean soldiers deleted several photos taken by my friends. They may have thought this would be beneficial to their national image. But this censorship only alienated us. Further, the act itself was pointless. Before they were deleted, the photo had already been saved several copies in the computers we carried.

The moment I reached the Chinese border, I updated my status on Wechat, the Chinese WhatsApp, “Good to have Internet access after four days. Goodbye North Korea! If you allow free traveling someday, I will come back.” At that moment, for the first time in my life, I felt the air is permeated with the tinge of freedom, though the feeling didn’t last long.

[1] Data were given by the female guide. It is worth noting that the lives of Pyongyang residents may not be as tough as their minuscule incomes suggest. The socialist state provides free housing (about 215-320 ft2 per person), necessities like cloth and oil, healthcare, and a free education from kindergarten to college.

All photos are reprinted with the permission of the author.

Chenzhou Gong
CPD Blog Contributor
Administrative Assistant at The Center for Think Tank Research and Management, Shanghai
YOU MIGHT BE INTERESTED IN...

The Ethics of Visiting North Korea

In the wake of the U.S. travel ban to North Korea which took effect on September 1, the Condé Nast Travelogue podcast looks at the morality behind visiting the country. The hosts grapple with the idea of tourism to the...

Mexico’s international image is in shambles. Once lauded as a promised land by the international media and markets, Mexico has completely lost its mojo due to an improper administration, plagued by scandals. At the beginning...