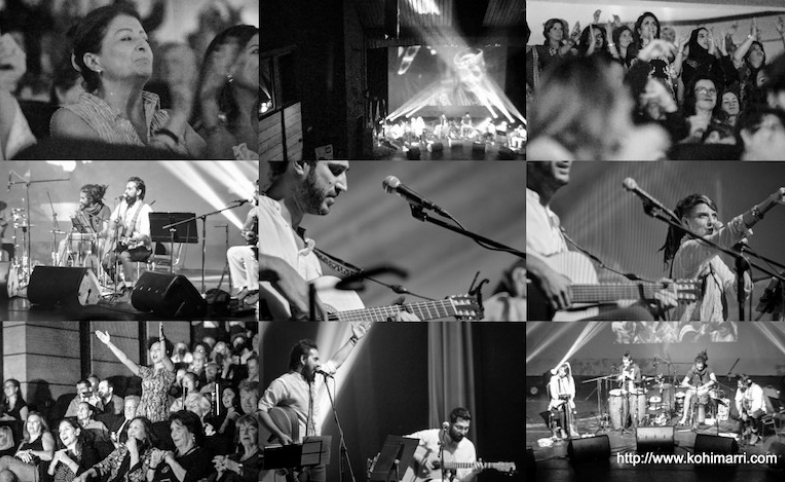 Music has been used throughout the years as a medium for self-expression and social cohesion not just between individuals, but also between communities and nations themselves. This form of cultural diplomacy enables messages conveyed through song to connect people from various backgrounds and lifestyles.

In an interview with The Jordan Times, Pakistani vocalist Jimmy Khan, a young music talent who was featured on the Coke Studio music channel in Pakistan, said that “there hasn’t been a lot of collaboration between Jordan and Pakistan in general regarding art and culture.” This made the multilingual, fusion concert between Jordanian and Pakistani artists, which took place this month, a very unique and important event in bridging the gap between the two countries’ music and culture.

Khan was joined by Pakistani guitarist and backing vocalist, Shahab Hussain, as they collaborated with the local Jordanian band, SemaZen, consisting of musical duo Rawan Rishek and Atef Malhas.

As musical ambassadors, [the artists] facilitated cross-cultural understanding and promoted unity and peace between their two nations by singing songs in various languages and dialects.

The fusion concert, held on Thursday, October 4, at the Al Hussein Cultural Center Auditorium in Amman, Jordan was hosted by the Pakistan Women's Cultural Club (PWCC) under the Patronage of HRH Princess Sarvath El Hassan. Every two years, PWCC puts on a Pakistani cultural event in the form of arts and crafts, film and fashion to share their cultural heritage with the Jordanian public.

This musical and cultural collaboration between Pakistan and Jordan acted as a mechanism for cultural diplomacy by bringing together humanity through art and music, said the artists. As musical ambassadors, they facilitated cross-cultural understanding and promoted unity and peace between their two nations by singing songs in various languages and dialects.

The goal of the concert, which was the first collaboration of its kind, was to engage the public with both countries’ cultural and societal aspects through the blending of Arabic and Punjabi music, while also supporting an independent, local band like SemaZen. “[The concert] is about us showing our cultural to them,” commented Khan during the performance. “The idea of the show is to fuse our cultures together.”

The evening was filled with a fusion of Pakistani, Arab, Spanish and English popular music, which was sung in different genres, including folk, contemporary and mystical. Instruments and poetry from other countries were also incorporated to exhibit the extent to which music transcends borders and cultures in our globalized world, said the artists on stage.

The use of various sounds, instruments and dance promoted the shared music and culture between Pakistan and Jordan, while also highlighting the individual identity of each nation. According to Yasmin Abu Jaber, President of PWCC, “We hope this pilot project will create a cultural and touristic exchange between our two countries.”

Leading up to the concert, the artists visited famous Jordanian cultural sites like Petra, Jerash and the Dead Sea to record their music with the idea of creating a musical travelogue and dialogue—all of which were shot by Pakistani artistic director and photographer, Kohiyar Marri, and shared on social media.

The artists combined each of their unique sound and style to create a single performance that celebrated the coming together of cultures through music. Following the Arabic performance of a cover of Bob Marley’s “Everything’s Gonna Be Alright,” Risheq, lead vocalist in SemaZen, explained how the English song has now become a part of Arab culture after they translated it years ago.

About five of the songs performed were a mixture of both Urdu and Arabic. However, due to similar genres shared between the two sets of artists, “collaboration itself was very natural,” commented Khan. “We got excited every time we performed a song, even in rehearsal, because this fusion was so unique and inspiring,” he continued.

SemaZen, whose mission is to spread positive messages through interactive performances, collected songs from different faiths and languages around the world to be sung at the concert. During the performance, the band urged the audience to join them in singing, even during a Spanish number that was selected in honor of Venezuelan guests present.

The concert was a lively and spirited event with the musicians, as well as some of the audience members, dancing in their seats as multicolored lights and slideshow images of Pakistani culture, art and nature flashed on the back wall of the stage. This joyful atmosphere made the evening seem even more so like a celebration between the performers and the audience.

At one point, Atef Malhas, guitars and backing vocals of SemaZen, looked across the stage to Khan and said, “I’m gonna miss you man.”

“As cross-cultural aspects were concerned, the concert was very important to do as a first step in developing music in Urdu and Punjabi and Arabic,” said Khan. Risheq added that she is happy to be having a cultural and human exchange with Pakistan through learning songs in different languages, cultures and faiths.

By the final song, half the audience was standing and dancing along in their seats as well as echoing the chorus—a testament to the communal goal of the fusion concert, as well as the power of music diplomacy.

Note from the Author: The concert was made possible with the help of sponsorships by International General Insurance (IGI), Ministry of Tourism and Antiquities, Jordan Tourism Board, Bank al Etihad, as well as Al Qabas Printing Press, Uber and JorMall.

Lauren Brackmann thank you for this feature as a member of the Pakistan Women's Cultural Club we were looking for this kind of understanding of our concept and why we fuse the musicians together. We hope to continue to be ambassadors of our beautiful country Pakistan and share our culture with all.

Lauren,
Thanks for telling this story with you wonderful article. Check out the similar work we do in cultural programming in the American Music Abroad program with our partner Association of American Voices, amvoices.org. Music really does build bridges! I hope someday our bands can collaborate - and a very special thanks to your sponsors and partners who made this happen!
JP, Cultural Affairs officer, U.S. Department of State