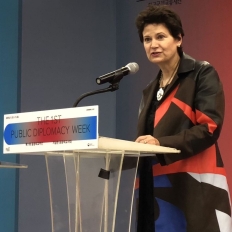 Nancy Snow is Professor Emeritus of Communications at California State University, Fullerton and Pax Mundi (“Distinguished”) Professor of Public Diplomacy, Kyoto University. She has lived primarily in Tokyo, Japan since 2012, first as a Fulbright Professor at Sophia University followed by an Abe Fellowship and Visiting Research Professorship at Keio University. In 2020 Snow holds the Walt Disney Faculty Chair in Global Media and Communication in the Schwarzman Scholars Program, Tsinghua University where she is teaching “Public Diplomacy and Global Pandemic: The Search for Trust in a Time of Chaos.”

Snow has held visiting faculty appointments at two of the leading master of public diplomacy programs, Syracuse and USC. She was Associate Professor of Public Diplomacy at Syracuse University's Newhouse School of Public Communications and served as adjunct professor of public diplomacy in the USC Annenberg School for Communication for ten years. At USC Annenberg she was a principal faculty consultant in the establishment of the USC Center on Public Diplomacy and became the Center’s first senior research fellow. Dr. Snow is a former USIA and State Department official in the Presidential Management Fellows Program during Bill Clinton’s first presidential term. She is the author, editor or co-editor of 13 books available in six languages (Korean, Chinese, Portuguese, Arabic, Japanese, Persian), 75 scholarly articles and reviews and hundreds of popular media essays.