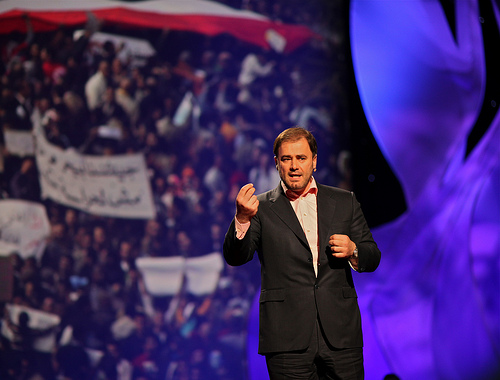 In 2004, I released my second book called Information War: American Propaganda, Free Speech & Opinion Control Since 9/11. The Bush administration was designating the Arab language network Al Jazeera the network of Osama Bin Laden. It was almost as if they were warning the American people that watching non-American news was aiding and abetting the enemy.

Secretary of Defense Rumsfeld said, “We are being hurt by Al-Jazeera in the Arab world. There is no question about it. The quality of the journalism is outrageous - inexcusably biased - and there is nothing you can do about it except try to counteract it.” He accused Al Jazeera of putting American troops at great risk.

No American good, it seemed, could come from Al Jazeera.

President Bush announced the U.S.-funded Alhurra (“The Free One” in Arabic) as a necessary counter to what the Bush administration saw as the pro-Arab, anti-U.S. and anti-Israeli Al Jazeera. And what would make “The Free One” different? Bush promised that Alhurra would overcome “the hateful propaganda that fills the airwaves in the Muslim world and tell people the truth about the values and policies of the United States.” At the time of the Alhurra announcement, I wrote an op-ed for O’Dwyer’s PR Daily: “Alhurra-Al Who? Haven’t heard? We’re Free, They’re Not!” What I said then may just as easily apply today.

The United States, "the big one," tends to associate better communication with more information. If we can just get our message out there, make it louder, make it stronger, make it bolder, then we'll be well on our way to repairing miscommunication problems. But just maybe what is sought is more respectability and acknowledgment that U.S. geopolitical and economic interests in the region don't often match up to how the Arab people perceive freedom, particularly from despotic government intervention.

As of 2011, Alhurra’s market share has grown at a snail’s pace to that of Al Jazeera, which saw its market share expand a couple of thousand times over during the Egyptian protests. So when it comes to losing the information war, as Yogi said, “it’s déjà vu all over again.”

Secretary of State Hillary Clinton stated the Murrowian “completely obvious” when she told the Senate Foreign Relations Committee that “we are in an information war and we are losing that war.” America, she said, is losing the information war abroad to global media networks that offer “real news.”

Clinton cited Al Jazeera and Al Jazeera English, but also CCTV and Russia Today as global media networks that are growing their audience, while U.S. media are seeing diminishing returns.

"You've got a global set of networks — that AlJazeera has been the leader in, that are literally changing people's minds and attitudes. Like it or hate it, it is really effective."

"You may not agree with it, but you feel like you're getting real news around the clock instead of a million commercials and, you know, arguments between talking heads, and the kind of stuff that we do on our news," Secretary Clinton said. "Which, you know, is not particularly informative to us, let alone foreigners."

Clinton’s remarks came as a ‘waiting to exhale’ moment for many global media viewers and journalists. Al Jazeera English devoted an entire special to this moment: a U.S. official acknowledging that the U.S., arguably the inventor of the media and persuasion industries, has done a poor job at informing, much less, persuading: AJE Inside Story: The Information War.

I’ve been a regular commentator on two of those global media networks that Clinton cited: Russia Today and Al Jazeera English, and have also appeared on the English-language Iranian TV network, Press TV. I’ve also worked with the U.S. Government’s Voice of America and done research on Alhurra’s Today Show style program, “Al Youm.” While I am impressed with Al Youm as a promising direction for Alhurra, I’m still not convinced that the U.S. media networks, private or public, can adequately compete with the English-language global networks. We could compete, but we can’t now because the U.S. Government-sponsored media are still seen as U.S. propaganda outlets that represent official U.S. national interests. And the U.S. commercial media are… well, do I need to even go there? When you’ve got Larry King’s British replacement salivating over his record ratings with the “bi-winning” Charlie Sheen… see, I really didn’t need to go there.

So thank you, Secretary Clinton, for reminding me that I need to update my book.

This week I’ve been watching much of the coverage chronicling Barbara Walters’ incredible career and pending retirement.  The sheer magnitude of her career will be something that will be discussed and debated for years...