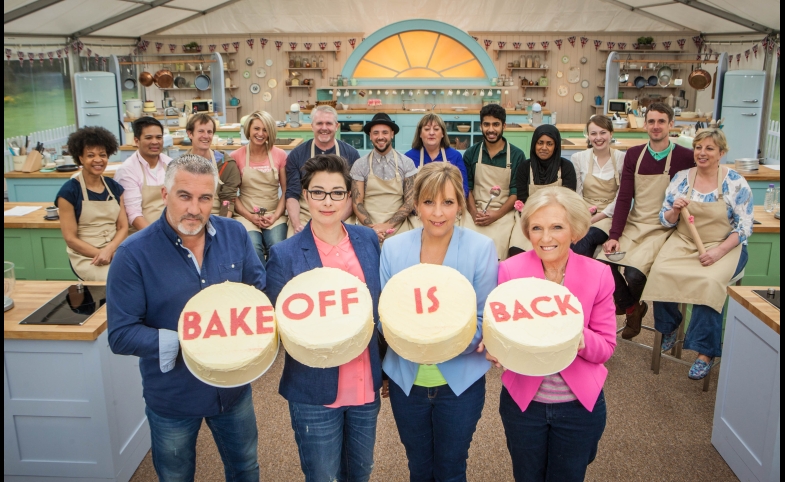 A prison guard, a doctor, and a rugby coach walk into a kitchen. What could be the first line of a bad joke is actually the premise of a BBC reality television series called The Great British Bake Off (TGBBO), which has joined a tradition of successful British cultural exports to the United States. TGBBO and its American counterpart are examples of cultural diplomacy: the former sought to satisfy nostalgic British audiences while promoting domestic inclusivity; and the latter aimed to gratify American Anglophilia while projecting an image of present-day British diversity.

In the last decade, Britain’s identity has faced challenges from inside and out. In 2008, Britain was struck by a financial crisis that left people across the class spectrum searching for comforting respites from their daily lives. The Scottish referendum in 2014, while voted down, revealed that a large constituency of British society preferred self-sovereignty. Increasingly, fear of international terrorism has morphed into xenophobia, spawning fervent anti-immigrant sentiment.

Meanwhile, a traditional concept of British identity held sway in the U.S., where British television has long constituted a popular, profitable enterprise. From Upstairs, Downstairs to Downton Abbey, Britain of old was kept alive in America through an anachronistic yearning for British class structure, royalty, and empire. Not that the British government was always intent on emphasizing this aspect of its country’s heritage. Tony Blair’s administration embarked on the “Cool Britannia” nation branding campaign to promote the country as hip and modern. David Cameron’s administration changed course in 2012 with the “GREAT Britain” campaign, which celebrated the country’s diversity, embraced the familiar and the unexpected, and coincided with the emergence of TGBBO as a cultural phenomenon.

TGBBO first aired on BBC Two in 2010 but was soon moved to BBC One, where it regularly held a 50% audience share and brought in over 13 million domestic viewers for the 2014 season finale, more than that year’s World Cup Final. The creators, Richard McKerrow and Annie Beattie, were inspired by rural bake-offs at village fairs and the idea of baking as a platform for exhibiting regional specialties. The cast, Beattie said, is intended to be a “representative mix” of British society. Recent finalists have included Tamal, a gay doctor whose parents are from India, and Nadiya, who wears a hijab and bakes cakes inspired by her Bangladeshi roots.

Since 2011, TGBBO has been filmed under a white tent in the gardens of a private estate. The show is a quintessential fantasy of the English countryside, with a palette of pastels and floral patterns. The three baking challenges each week draw on regional traditions but run the spectrum from simple biscuits to multi-tiered cakes. When it is not focused on the extravagant bakes, the camera often lingers on strings of Union Jack pennants or the surrounding pastoral paradise of bleating lambs and fields of buttercups.

A key reason for the success of TGBBS in the U.S. may be that it plays on some stereotypes of Britain while challenging others.

Three attempts were made to export TGBBO to the United States. In 2013, CBS produced a short-lived adaptation, The American Baking Competition, featuring TGBBO judge Paul Hollywood. In 2015, ABC aired a four-week adaptation, The Great Holiday Baking Show, featuring TGBBO judge Mary Berry. The CBS production was hobbled by criticism of forced drama, while the ABC production was mocked for juxtaposing a replica TGBBO set with awkward American “performed enthusiasm.” Later in 2015, PBS broadcast two seasons of TGBBO under the title The Great British Baking Show (TGBBS), because Pillsbury owned the rights to the term “bake off.” PBS secured the rights to the show itself through the BBC, which retained a small fee, and gave TGBBS the coveted lead-in spot to Downton Abbey. Select episodes of TGBBS are still available for streaming by American viewers on Amazon and Netflix, but PBS has not yet announced whether it will air a new season.

TGBBO has been exported to twenty countries, including Brazil, Germany, the Netherlands, Romania, Turkey, Thailand, and Ukraine. In these adaptations, TGBBO was repurposed to celebrate the host country’s culture. However, in the U.S. the Americanized versions of TGBBO encountered more muted responses than the British version, which garnered an average of 2.1 million viewers over ten episodes. American television critics consistently preferred TGBBS to American reality television, endorsing British cultural products in general as a welcome antithesis to brash American shows.

TGBBO encompasses multiple dimensions of cultural diplomacy. As a domestic cultural product, it is a commercially initiated, government-supported nation branding exercise that attempts to reframe what it means to be British. The show defines itself through its name and visuals as a depiction of Britain’s cultural treasures. Yet Britain is not the star of the show; rather, it is British people, normal folks who are celebrated for their diversity as much as for their talent. TGBBO injects a call for inclusiveness and an embrace of regional representation into a show that has everything required to tempt viewers who prefer an exclusive sense of British identity. In this way, TGBBO found success in a cultural diplomacy sense as a conversation generator on topics such as immigration, gender roles, heritage, and national identity.

Adaptations of TGBBO around the world attest to the show’s capacity for taking on fresh nationalist interpretations, but as an intact cultural export to the U.S., TGBBS speaks to American expectations for and perceptions of Britain. Similar to its underlying strategy in Britain, TGBBS promotes an image of a living, diverse Britain in a nostalgic wrapping. TGBBS plays to American Anglophilia, employing familiar British symbols and practices as a selling point, but at its heart the show is about the universality of baking and the diversity of British society. A key reason for the success of TGBBS in the U.S. may be that it plays on some stereotypes of Britain while challenging others.

TGBBO demonstrates that a cultural product can serve multiple purposes, such as shaping both domestic attitudes towards foreign influences and foreign attitudes towards the country of origin. It also suggests that adding familiar references to cultural diplomacy products can attract a more expansive audience.

Photo by Mark Bourdillon I CC 2.0

Note from the CPD Blog Manager: This piece is written as a case study of the significance and challenges of a recent Black History Month UK project with the British Embassy in Japan led by the author. The global spread of...