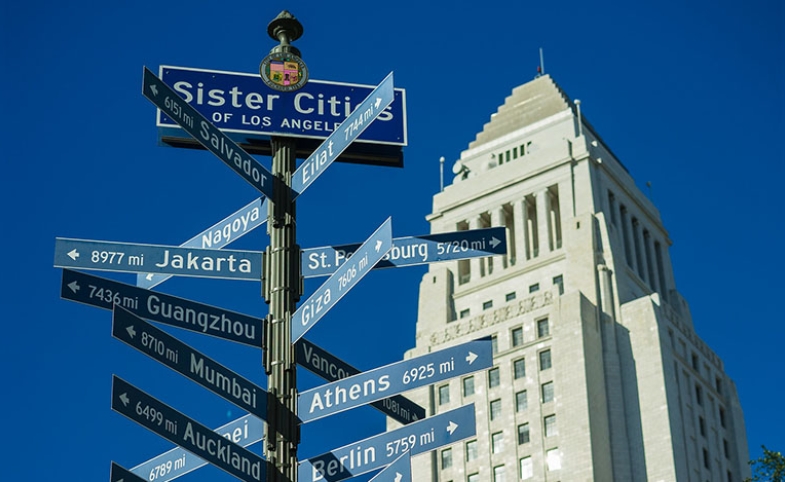 In a recent contribution to the CPD Blog, author Sohaela Amiri discusses how the city of Los Angeles is assisting beleaguered Kyiv by means of city diplomacy. She writes, “many Angelenos are eager to help” the Ukrainian capital by formally embracing it as a sister city:

Their city, the government entity that most closely represents them, could use its international ties to further help its citizens help their fellow citizens of another city. This is how a city advances the global interests of its local constituents.

Indeed, cities have often provided each other crisis support in municipal areas of expertise, as was notably the case with Dutch city diplomacy in the Balkans conflict of the 1990s. This piece offers further thoughts about city diplomacy in aid of Ukraine.

The U.S. sister city movement, now 66 years old, comprises an important set of international municipal relationships. Chicago, for its part, paired itself with Kyiv in 1991. The Windy City’s fundraising for Kyiv’s relief was launched on March 2 when Mayor Lori E. Lightfoot announced a further measure: the suspension of Chicago’s sister-city status with Moscow. In an “unambiguous message” consistent with the wide swath of Western sanctions, she strongly condemned “all actions by the Putin regime.”

The need to exert maximum dissuasive pressure on that regime, urgent as this is, does raise a concomitant task for public diplomacy: mitigating the alienation of rank-and-file Russians. By sweeping up not just officials and oligarchs, but also artists, athletes and various non-combatants from Russia’s civil society, broad-brush sanctions serve Putin’s mischaracterizations. The President assures his Russian audiences with a shrug that we in the West are their inevitable, implacable, condescending foes. Updating the old divide between ‘Slavophiles’ and ‘Westernizers’ to his purpose, Russians now rally behind the regime as if they, not Ukrainians, are the besieged ones.

Could public diplomacy prove its mettle here? From a PD perspective, shouldn’t non-state actors engage with the Russian people during the conflict, rather than disengage? What Putin says is untrue: Russians’ literature and music are treasured globally, as are many of their contributions to everything from science to sport, from chess to cinema. It is not forgotten that WWII was won through Russian courage and sacrifice. Russian diaspora are valued citizens in Western countries. These proud traditions lie at odds in so many ways with their President’s vainglorious misadventure in Ukraine—hundreds of Western sister cities could help underscore that distinction.

Human connections between municipalities usefully persist, and they can add to the positive impact of city diplomacy in fostering long-term peace for a stable, democratic Ukraine.

In the U.S. alone, there are at least 50 cities in 34 states maintaining sister-city status with counterparts in Russia. These metropolitan populations total more than 70 million Americans, and the 64 partner cities represent a catchment of about 43 million Russians. A significant intersection of the two populations.

As Amiri rightly points out, sister city initiatives get implemented only to the level that scarce municipal resources are assigned to support them. Research, including hers, has shown that other city diplomacy networks and projects may be more robust. Nonetheless, these human connections between municipalities usefully persist, and they can add to the positive impact of city diplomacy in fostering long-term peace for a stable, democratic Ukraine.

Many of these U.S.-Russia ties were formed following the USSR’s collapse in 1989. A few began earlier, during the Cold War when President Dwight D. Eisenhower founded the sister city movement. City pairings since then have occurred at all scales, some with fairly obvious rationales. It’s not hard to fathom why Dixon, Illinois has affinities with Russia’s Dikson (pop. 676). Alaska, in its close proximity to Siberia, has fostered at least five sister city relationships. In Michigan, Flint has paired up with Tolyatti, Russia’s auto-making capital, and Kalamazoo recognizes the greatness of Russian culture through its city-to-city pact with Pushkin. Eerily, the twins to Los Alamos and Livermore are Sarov and Snezhinsk, Russia’s no-go centers of nuclear research. One hopes that Normal, Idaho can talk sense to its municipal sibling, Vladimir (pop. 357,024).

In 1984, the city of Los Angeles made Russia’s former imperial capital St. Petersburg its sister city. Population-wise, this represents the largest existing city-to-city relationship between the U.S. and Russia. Enduring many international vicissitudes, warm relations seem to have persisted on the L.A.-St. Petersburg axis through the 1990s and 2000s before attenuating in recent years. Today, facing the Ukraine emergency, one wonders if that nearly four-decade relationship could reassure residents of Putin’s birthplace that the West doesn’t demonize them, nor Russian society. Rather, we oppose specific international criminal transgressions by its ruling elite, enacted without public consensus.

To whatever end the conflict proceeds, it is certain that a city diplomacy geared to recovery and restoring civil society will be needed throughout the affected region. In the meantime, sister cities should foster that people-to-people “solidarity” that Rogier van der Pluijm and Jan Melissen once diagnosed as a core dimension of city diplomacy. Angelenos can help demonstrate that the West’s biting sanctions seek to constrain a rogue elite, not to diminish Russian culture and society.

The Hague Journal of Diplomacy (HJD) and CPD hosted a webinar to coincide with the launch of HJD’s special issue on city diplomacy. This session took place on April 7 from 8:00am PT to 9:15am PT (5:00pm–6:15pm CET...