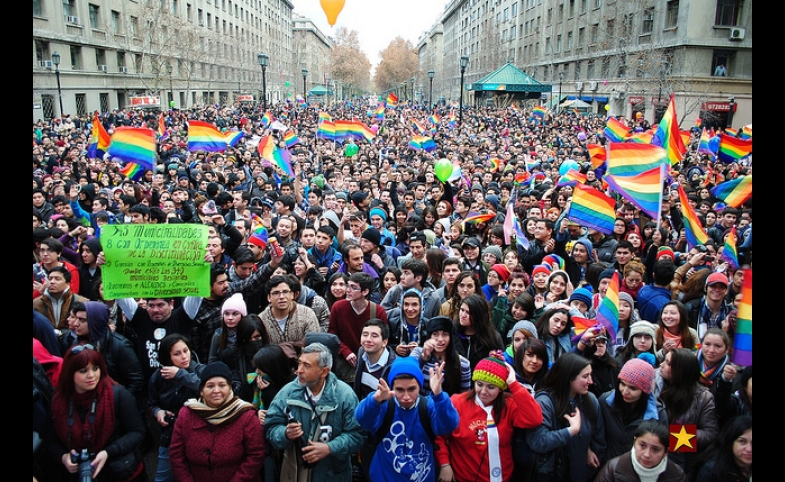 Two months into my first year in Chile, the murder of 24-year-old Daniel Zamudio rocked the world. The brutality of four neo-Nazis attacking Daniel for his perceived queerness was picked up by nearly all major international news outlets, and led to the accelerated passage of Chile’s (and Latin America’s) first anti-discrimination law— the Zamudio Law—which had previously collected dust in parliament for seven years prior to 2012. Many cite this incident as a turning point in Chile’s fight for LGBT rights and equality, but was it really?

It’s a great narrative for Chilean politicians — a national tragedy bringing a country together. It’s so common that it’s become almost cliché to see both legal and social change accompany natural and man-made disasters. But if you engage with Chileans and look beyond the politics, you’ll see that while Chile is moving forward, with nearly 46% of the population now supporting same-sex marriage, the country ties with Puerto Rico for the least-progressive judicial systems in Latin America, and thus requires extra-judicial influence to enact social change.

Coincidentally, Chile’s Catholic identity is in decline. The country ranks second after Uruguay for countries in Latin America that identify as “atheist or agnostic” at 25%. Nevertheless, religion continues to play a dominant role in the lives of Chileans, but there is a dramatic generational disconnect. Whether this generational shift will significantly impact social attitudes has yet to be seen.

Before going any further, it’s important to draw clear distinctions between legal changes and social changes. Since the passing of the Zamudio Law in 2012, center-left President Michele Bachelet endorsed legislation in 2014 permitting civil unions for same-sex partners (to a mostly lukewarm response) and during a speech in front of the UN’s LGBT Core Group last month, announced that she will introduce a same-sex marriage bill to congress in 2017. Invoking her inner Hillary Clinton, she proclaimed, “Fighting for LGBT rights is fighting for human rights.” These legal changes are gestures of solidarity that resonate throughout the global LGBT community, and work to project a more positive image of Chile to the world, but they’re not enough.

Chile has never been fortunate enough to rely on a natural supply of soft power. We know about Pisco (but is it Peruvian or Chilean?); we drink the wine (but do we prefer Argentinian?); they’re good at soccer (but they don’t have a Messi and they’re not Brazil). What it has been building over the past few decades are its economic heft and its trade prowess. But while it can brag about steady growth in GDP, it lags embarrassingly behind in LGBT and abortion rights — to national chagrin. What the Chilean government should do is tap into its homegrown activist communities and support organic movements already fighting for social change. This can bridge the disconnect between the government and its people—and prioritize domestic stability over international perceptions.

Parallel to these legal changes, a counter-narrative has emerged in recent years, championed by Chilean students, musicians, and entertainers. Fueled by inaction and snail-speed changes in perception toward minorities in Chile, a group of my former students created a revolutionary collective self-titled “Las Putas Babilonicas” (The Whores of Babylon) — a clear commentary on the powerful influence of the Catholic Church in Chile — and have been ruffling feathers ever since. They are part of an entire generation who feel alienated and unsupported, claiming that the Zamudio Law was just a placebo for the gay movement and there is no voice representing them. The boys, donning pantyhose and high heels, and armed with queer theory and literature, chose to come out as scandalously as they could to cast aside any doubt that Chile’s schools are full of LGBT youth.

Since 2002, the Homosexual Movement of Integration and Liberation (MOVILH) — Chile’s largest LGBT rights organization — has conducted comprehensive interviews and documented thousands of cases of homophobia and transphobia throughout the country and published their findings.  The political appeal of promoting the idea of LGBT equality amidst international pressure to legalize gay marriage is understandable, but Chilean politicians need to refocus on the epidemic of hate crimes rooted in entrenched homophobia and transphobia — especially in older generations. In the past year alone, there has been an 8.8% rise in reported hate crimes against LGBT people, and 2015 was the worst year in nearly all categories of anti-LGBT actions.

What the Chilean government should do is tap into its homegrown activist communities and support organic movements.

Gender and sexual diversity is currently taking center stage. Travestis, transformistas, drag queens, transgeneros, transexuales, locas — the list goes on. Quick Google searches reveal pages and pages of forums dating back to years of curious people begging for clarification between the terms. While the art of drag has been around for decades in Chile, the conversation has peaked in popularity in recent months due to the production of “The Switch” — a reality show modeled after RuPaul’s Drag Race in the U.S, from which they bought the rights.

Just like the revolutionary “Putas Babilonicas,” other Chilean artists are helping to accelerate the movement outside the courts as well.

Eccentric musician-turned-filmmaker Alex Andwandter recently directed a film titled “Nunca Vas a Estar Solo” based on the murder of Daniel Zamudio, and was awarded the Teddy Prize for Best LGBT Story at the Berlin Film Festival. He received this award only three days after a 20-year-old Chilean man, Marcelo Lepe, was beaten and shot by his neighbors for dressing in women’s clothing.

It’s too soon to see how perceptions towards the trans and gay community will shift due to the new media exposure and legal changes, but there needs to be a movement to influence social perceptions at the rate legal changes are made, or else the impact of laws won’t be felt for years.

The government can’t do it alone, but it can work in conjunction with passionate individuals, artists, musicians, and performers who have a stronger influence. Civic organizations can break through socio-economic and political barriers and empower Chileans to counter antiquated beliefs and propel the LGBT equality movement forward.

It seems counterintuitive to collaborate with forces born from the blows of the oppressor, but support can be given without heavy-handed control. And support is exactly what Chileans need before more lives are lost to senseless violence.

Photo by Felipe Longoni I CC 0

Oluwaseun Tella, a professor in the Department of Political Sciences at the University of South Africa, Pretoria, takes a hard look at the limitations and problems associated with South Africa's soft power in the...