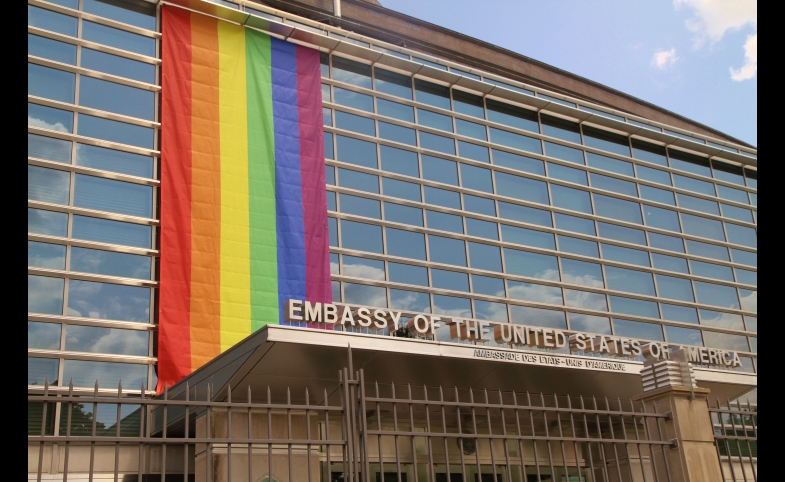 In the past four decades, since the disastrous events of the Stonewall Inn in 1969, the United States has undergone rigorous legal transformations to eliminate various discriminatory laws against its LBGT community. Many of these changes have only taken place under the Obama Administration in the past few years. The drastic policy changes do not only concern domestic affairs; advocacy for LGBT rights is now among the top priorities for the country’s foreign policy as well. The U.S. State Department has itself changed its stance dramatically from not allowing gay individuals to join the Foreign Service to Secretary of State, John Kerry promising to “ensure that by the end of my tenure, we will have lesbian, bisexual and transgender ambassadors in our ranks as well.” Today, U.S. Embassies around the world participate in Pride Parades on the anniversary of the Stonewall Riots. Such drastic shifts in attitude and conduct of the United States government (which continues to rapidly evolve on this issue) is worth studying for a number of reasons, but mainly to identify the underlying factors as well as to assess what values this pivot brings to U.S. Foreign Service, the country's image abroad, its credibility and its policies—both domestic and foreign.

In a Memorandum for the head of Executive Departments and Agencies, in 2011, President Obama, stated the following:

"The struggle to end discrimination against LGBT persons is a global challenge, and one that is central to the United States commitment to promoting human rights.  I am deeply concerned by the violence and discrimination targeting LGBT persons around the world   whether it is passing laws that criminalize LGBT status, beating citizens simply for joining peaceful LGBT pride celebrations, or killing men, women, and children for their perceived sexual orientation.  That is why I declared before heads of state gathered at the United Nations, ‘no country should deny people their rights because of who they love, which is why we must stand up for the rights of gays and lesbians everywhere.’ Under my Administration, agencies engaged abroad have already begun taking action to promote the fundamental human rights of LGBT persons everywhere.  Our deep commitment to advancing the human rights of all people is strengthened when we as the United States bring our tools to bear to vigorously advance this goal. By this memorandum I am directing all agencies engaged abroad to ensure that U.S. diplomacy and foreign assistance promote and protect the human rights of LGBT persons."

“America cannot continue to preach equality to the world while refusing to take action at home.”

In effect, the State Department under Hillary Clinton and John Kerry has globalized the LGBT rights revolution. There are countless public diplomacy initiatives undertaken by various U.S. Embassies in the past six years to promote LGBT rights; these range from holding roundtables, panel discussions, summits, and national dialogue days on legal and social challenges facing LGBT people globally. Other efforts include cultural diplomacy initiatives, advocacy campaigns to raise awareness about LGBT-friendly human resource policies, and urging entities such as the Organization for Economic Cooperation and Development (OECD) to examine the economic case for LGBT-inclusivity and to develop recommendations for policy makers to remove barriers to equal LGBT treatment in the workplace. Some U.S. embassies also offer grants to advance LGBT rights.

While LGBT rights are among the State Department’s top priorities, the United States still faces a lot of domestic challenges in this regard given that there are still patterns of discrimination, violence, and hate crimes toward the LGBT community in this country. In today’s globalized, hyper-connected world, domestic issues no longer end at the edge of a nation’s shores; they are global, and they impact any country’s foreign policy. As Kerry argues, “America cannot continue to preach equality to the world while refusing to take action at home.”

President Obama has administered many monumental policy changes including adding gender identity among the classes protected against discrimination under the authority of the Equal Employment Opportunity Commission (EEOC) and signing an Executive Order that added sexual orientation and gender identity to the categories protected against discrimination in hiring and employment on the part of federal government contractors and sub-contractors. Since last month, the State Department is eliminating transgender exclusions from the agency's largest health insurance program as well and now they are very likely to have a Special envoy for LGBT rights soon. These are all great achievements, but in order for the State Department to continue having “intelligent and really constructive” methods of advancing its foreign policy objectives, as George Kennan suggested, “much depends on health and vigor” of the American society, “this is point at which domestic and foreign policies meets. Every courageous and incisive measure to solve internal problems” of the U.S. “is a diplomatic victory […] worth a thousand diplomatic notes and joint communiqués.”

For the United States to thrive as a global leader and remain indispensable, it is crucial that it stays true to its responsibility of maintaining a liberal world order, promoting democratic values and the protection of human rights. Advocating LGBT rights therefore, both domestically and globally is perfectly in line with American interests, its purpose, and global identity. Such advocacy would not only enhance American soft power but could improve its image abroad. That said, in the next few years, it would be interesting to study public diplomacy projects undertaken by various U.S. Embassies to engage and educate foreign publics on LGBT issues and gauge how opinion and attitudes are swayed in support of LGBT human rights, in order to assess the impacts of such activities on advancing (or hindering) U.S. foreign policies.