Home|Gods, Geeks, Gamers, and Gatekeepers - The Future of Power

Gods, Geeks, Gamers, and Gatekeepers - The Future of Power

I’ve been thinking a lot lately on what influences us. Day to day we each have our routines and along the way are bombarded by images, messages, and endless information. But what breaks through the information overload and influences us? What captures our attention, our imagination and ultimately lodges itself in our memory? Maybe I’m paying closer attention to the details of everyday more acutely after reading Joe Nye’s latest book The Future of Power. I have always been a fan of Nye’s work and this book doesn’t disappoint as he asks us to shift how we view power and the role it plays geopolitically. It had me thinking further on the role power plays in our everyday lives, who has it and how do we get it.

When I think of who wields the most power and influence in everyday life – geopolitics aside – I think of four categories of power brokers: Gods, Geeks, Gamers, and Gatekeepers.

Let’s start with the Gods. As I contemplated these issues over Easter this past weekend, I thought of the nearly 2 billion Christians worldwide, or roughly one-third of the global population, who celebrated the event. I also thought of all my Muslim friends globally who number from 1.2 to 1.6 billion, or roughly one-fifth of the global population. No matter what your faith or lack thereof, God is ever present in many people’s lives around the globe. Many seek out religion to contemplate one’s place in the universe, atone for past wrongs, and find a sense of peace from a chaotic world. Like it or not, God is a powerful influencer in people’s lives, the ultimate power broker.

Geeks and Gamers are also tremendously powerful influencers. They used to be synonymous with socially awkward teenagers who rarely socialized and holed up in dark rooms to hack and program with abandon. Sometime around the time I was in grad school being a geek or gamer became “cool” not just because they dominated the counter-culture, but because they were clearly the future and many of us knew we would one day be either working for the geeks and gamers or at their mercy. The current demographic now for a geek or gamer is so diverse and broad-ranging that you can no longer put them in a nice little box. They are everywhere, in fact most of us are the geeks and gamers whether we care to admit it publicly and the mediums within which we engage with technology, capture our imagination and attention for massive amounts of time.

Then there are the gatekeepers. Who are the gatekeepers of power? They are the ones who control the flow of information, influence, and people. I would put them into the following broad categories: Official, Informal, and Literal. The official gatekeepers actually work for those in powerful, prominent positions whether in government, industry, or civil society. I’ve long argued that the executive assistants, secretaries, and schedulers of those in power are the ones with the true influence. They are the ones everyone has to get through to get to the power brokers. The informal gatekeepers are those who control and package information and experiences – the media, advertisers and marketers. We are influenced by them the minute we step out our front doors and turn on our car radios or power up our computers. Each year, advertisement spending is in the billions and after working for Keith Reinhard, Chairman Emeritus of DDB Worldwide and legend in the ad business, the past seven and half years, I’ve seen his creativity and genius at work firsthand. Keith knows how to capture your attention and your imagination unlike anything I’ve ever experienced. It’s why he’s receiving a lifetime achievement award next week and its why people like him, all those Mad Men out there, have so much power and influence on our lives. Some of this power is wielded in subtle ways. Other times, it’s blatant, shocking and well, loud. On this point, I’m thinking of media and primarily television where Americans still get the majority of their news from. The literal gatekeepers are all those in law enforcement who remind us just by their presence of what not to do, how to stay safe, and in the case of TSA for those of us who fly regularly, how to neatly put our lives in plastic bins and chug our errant bottles of water before progressing through the body scanning line.

The Future of Power & Virgin Diplomacy 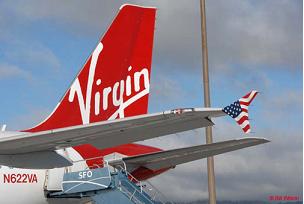 No matter where we tune our attentions and focus day to day, no matter who our primary influencers are, we still innately want to be surprised, engaged, and dare I say delighted. It was all the more ironic then to see and feel all of these emotions most recently in the new Virgin American Terminal 2 at SFO which opened last week. The Terminal is a work of art, diplomacy, and soft power all cast under Virgin’s signature soft purple lighting. Even TSA screeners had a spring in their step and a song in their heart – or maybe that was piped in. For years now in my prior work with Business for Diplomatic Action we worked with the travel and tourism industry to help raise the profile of America’s airports as the frontline in our diplomatic efforts. The airport is the first place you get a sense of a country, its people and its power profile. America’s Airports haven’t exactly led the way in developing positive customer experiences – if we can just keep our air traffic controllers awake and our full body scans to a minimum we think we’re doing good. Which is why I was so shockingly and pleasantly surprised to fly out of the new Virgin Terminal at SFO. I felt as though for the first time in a U.S. Airport, I was stepping into the future – the best of what America has to offer, American creativity, innovation and ingenuity at its best. Local organic products and leading chef-inspired restaurants lined up next to a massage therapy studio, global newsstand and travel tech gadget shop. Everything and anything to recharge (literally), comfort, inform, engage, and most importantly influence the weary traveller. I pray Virgin takes over a few more terminals in cities across America. Just imagine if Virgin America designers headed up an overhaul of our consular waiting areas in our embassies and consulates worldwide. A girl can dream.

The future of power is truly in the hands of those who inspire, surprise and engage us regardless of how we label them.

Public Diplomacy and the Third Metric

Huffington Post readers may be familiar with Arianna Huffington’s campaign to redefine success away from the two metrics of money and power toward a third which includes well-being, wisdom, and our ability to wonder and give...

I often say in international relations there six things a country can do: ‘giving, helping, sharing, boasting, shouting, and fighting.’ This fits with Joseph Nye’s classic definition of ‘soft power’ coined in 1990 as ‘the...