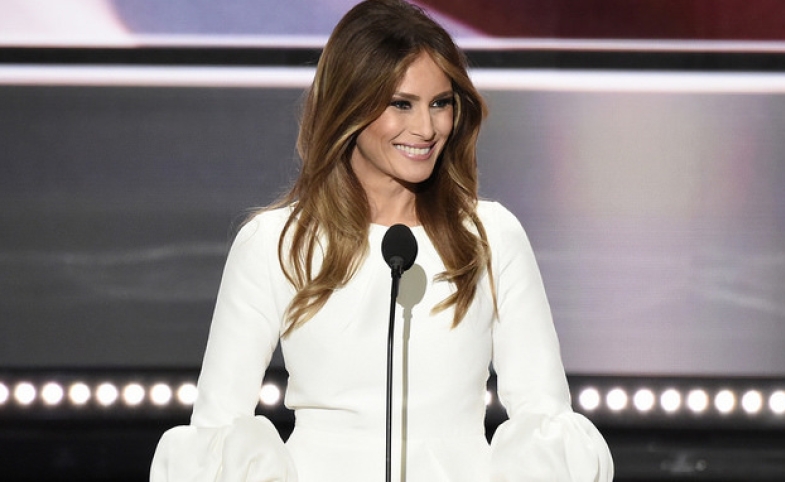 January 20 was brimming with conversation. Americans, world leaders and foreign publics around the world watched President Trump’s inauguration with curiosity, consumed with wonder about what the next four years might hold. But there was also another focus of conversation that day: Melania Trump’s wardrobe.

Some view the fascination with clothing, whether worn by stars in Hollywood or leaders in Washington D.C., as a symbol of sexism. Why focus on fashion when there are other things to discuss? The hashtag #AskMeMore has taken off in response to the common line of questioning during awards shows: “Who are you wearing?” Celebrities like Reese Witherspoon, Shonda Rhimes and Lena Dunham have spoken out about the trend, and are asking journalists to look beyond the dress when conducting interviews on the red carpet. And during the 2016 presidential election, there was constant discussion over whether or not we should be talking about Secretary Clinton’s outfit choices, with articles such as Elite Daily’s “What Hillary Clinton wore last night doesn’t matter, so stop talking about it.”

But perhaps we should be talking about outfits. What if clothes can bridge cultures? What if fashion can actually be used as a strategic arm of diplomacy? Joseph Nye argues in Soft Power: The Means to Success in World Politics, that the concept of soft power is based on attraction, rather than coercion. Isn’t fashion a perfect source of attraction?

With the new administration’s focus on “America First,” Melania’s inauguration dress, designed by legendary American designer Ralph Lauren, was an obvious nod to the president’s belief in American exceptionalism. Still, it seems possible that when traveling abroad, Melania, who is a former model who traveled the world, an immigrant, and a polyglot who is fluent in five languages, will use her understanding of foreign cultures and love for fashion to enhance the image of the United States by connecting with the cultures and styles of the places she visits.

Past first ladies often used their clothing as a nod to their host country’s culture and style by dressing in designs that represented the people they were visiting. Perhaps because it signals respect, fashion has been used to bring cultures together in way that might not have been possible without this soft power tool. The media take notice, and thus foreign publics are aware of the effort their visitor put into her fashion choices.

On a trip to London in 2011, Michelle Obama paid tribute to London-based designer Roksanda Ilincic by wearing her designs, and when in Indonesia, she chose prints influenced by the Indonesian decorative technique, Ikat. Former first lady Jacqueline Kennedy was also well-known for her precise fashion choices, wearing a French designer’s gown in Paris, and donning the bright colors of her host country when in India.

Fashion can also be used to share one’s own culture with the rest of the world by showcasing their own home country’s fashions. Perhaps this is where Melania might fit in if she chooses to stick with her husband’s theme of “America First.”

China’s first lady, Peng Liyuan, is hailed by the media as exemplifying soft power by promoting Chinese designers and culture abroad, as her fashion choices are seen to represent the modern Chinese woman to the rest of the world. Former U.S. first lady Nancy Reagan was also well-known for her style, and was famous for wearing American designs. Her fondness for the color red even gave her style a nickname, “Reagan Red.” According to Today writer Elizabeth Murray, “When Princess Diana visited the U.S. Capitol in 1995, the British royal even adorned her outfit with a red pocket square to compliment Reagan's look.” Reagan Red had gone global.

And in 1968, first lady Lady Bird Johnson was inspired to showcase America as a booming fashion capital by hosting a fashion show. The event, according to author Kimberly Chrisman – Campbell, was “conceived as a joint boost to the fashion industry and Mrs. Johnson’s pet project, domestic tourism and conservation.” The show was filled with red, white, and blue themes, and slides of famous tourist spots like the Statue of Liberty and Mount Rushmore. An obvious ode to American culture and society.

Then, continuing what Lady Bird started, Michelle Obama hosted a Fashion Education Workshop for students in 2014, where she highlighted the many facets of the billion-dollar industry, including marketing, technology, agriculture and manufacturing, and stressed its importance and value.

So, considering the fashion industry’s impact on international affairs, shouldn’t we look beyond critics’ claims of superficiality and trivialness, and instead embrace the creativity of clothing? Shouldn’t we continue to report on a first lady’s fashion choices as reflections of cultural respect and acknowledgment? Maybe #AskMeMore can open to the door to conversations about the impetus behind a fashion choice, and why clothes are an important element of soft power diplomacy.

Fashion, whether it's worn on the runway or displayed in a local store, is a stylish tool for self-expression, social activism and public diplomacy. World leaders often wear traditional clothing to interact with foreign...

Today, November 22, 2016, marks the 53rd anniversary of John F. Kennedy’s assassination. His legacy of American exceptionalism lives on, much in part due to the words of his widow, Jacqueline Kennedy, who made it her mission...