Home|New Rule-Makers in the CSR Game: The Dominican Labor Movement 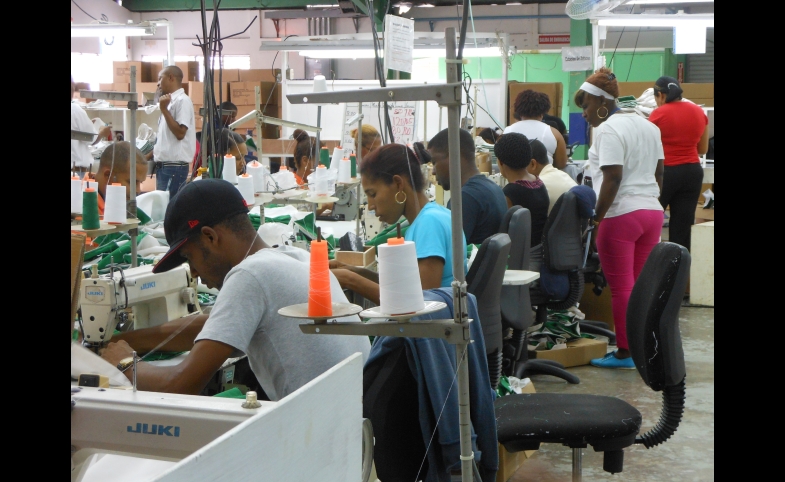 As I interacted with Dominican laborers, I saw the stark economic reality that often evades international news and media. The DR’s largely unregulated job market, especially in free trade zones, doesn’t correct labor rights violations, oppressing the social mobility of the impoverished and widening the gap between the wealthy 10% and the poor.

Money is unevenly distributed to the corrupt government, not to the workers who drive the economy. Many extraneous government positions enjoy high salaries, and a majority of Dominicans, Haitian immigrants, and Haitian-Dominicans live in poverty. According to the World Bank, 40.4% of the population lived at the national poverty line in 2011. Meanwhile, the government fails to provide sufficient public services and address high unemployment, raising taxes on a growing disillusioned public. Throughout my stay in Villa Altagracia and Santa Domingo, power outages were frequent, and running water was scarce. This speaks to the government’s unaddressed infrastructural issues. Still, citizens hold their breath for Medina’s inaugural promise to abate poverty and solve the power shortage.

I spoke with a call center worker in Villa Altagracia. He referred to several scandals that abused public money: Banco Intercontinental President Figueroa’s money laundering during Mejia’s presidency [1] and Mejía’s $800,000 increase in personal wealth during his presidential term [2]. He commented that part of the problem is lack of public knowledge and resources to target government corruption and inaction; many people are uninformed about their rights as citizens, let alone their rights as workers.

The Dominican heavily relies on manufacturing, which is 24% of the national GDP. In 2003, about 85% of Dominican garment exports to the United States faced increasing competition from free trade zones in developing Asian countries, such as China and India [3]. Because Dominican free trade zones constantly compete in a global market and largely depend on exports to the United States to fuel the economy, manufacturers cut production costs to attract United States corporations. Although CAFTA-DR was intended to alleviate competition from Asian free trade zones, it has allowed manufacturers (and companies that contract them) to dodge labor laws and pay below minimum wage in the DR.

Living in the free trade zone of Villa Altagracia, I witnessed workers in the garment industry starting to self-enforce their human rights. Meeting with workers in the Alta Gracia garment factory, we witnessed the budding local movement towards collective organizing. In this region, workers typically make less than $1 an hour. Alta Gracia workers used to be employed by BJ&B, a Nike manufacturer, who mistreated them and shut down production after USAS helped workers form a union. Now they’re employed by Alta Gracia, the DR’s first ever living wage factory that provides almost three and a half times above the region’s minimum wage, ergonomic chairs, a healthy work environment, and a democratic workplace for a union voice.

Meeting with Alta Gracia garment workers (many of which are women and single mothers), I was inspired by their stories. With a living wage, one worker was able to take out a loan with her husband to start a laundry-mat business. Yenny, the union treasurer, successfully paid for her daughters’ university education. Alta Gracia elevates females’ social statuses through economic independence.

Alta Gracia empowers other workers in the region to form unions. Contrary to negative stigma about unions, all the unions we met didn’t have any political affiliations. Alta Gracia workers and USAS met with SitraGildan workers in Bayaguana, who are enduring a 5-year fight against the factory’s fake yellow union. The factory authorized a yellow union through the courts in an attempt to block out the union formed by workers. Going to court, the workers pushed against the yellow union, gaining a 17% increase in salary.

A call center union, Sindicato Uneca, also faces the same obstacles with its company’s yellow union. Before Sindicato Uneca’s formation, one female worker developed kidney stones, because guards stopped workers from entering the bathroom. Other women, who didn’t know their rights, thought it was normal that managers asked for sexual favors. Finally, one worker tried to organize a union. In response, the company created a yellow union with false signatures to skew their membership numbers. When workers took the yellow union to court, the company bribed the union leader with large sums of money. One manager even threatened to cut a union member’s head off. They’re gaining better working conditions, but every day they face new forms of oppression.

Despite corporations’ attempts to squelch union formation, DR workers unite through local education and exchange. Alta Gracia, Sindicato Uneca, and SitraGildan educate workers about their rights. In an exchange, one female factory worker said that she didn’t get maternity leave. An Alta Gracia union leader promised to provide her support and advice to assert her rights.

The workers’ movement demonstrates that word-of-mouth knowledge and unified action drives progress. This grassroots labor movement promotes CSR, although the Dominican government and manufacturers for American corporations avoid responsibility. When asking workers what the role of the local government was, many echoed: “Workers don’t have local government accessibility, and if there is a local government, they’re not involved.” So far, the government has failed to play any role in protecting workers. Widespread change has started, as Dominican workers join with Fedotrazonas (an umbrella organization for unions in the DR), USAS students, NGO’s, and worker populations abroad. Perhaps legislation and government intervention proves ineffective in enforcing Dominican labor standards, as we see more local and foreign publics promoting CSR.

There is also potential to engage the significant Dominican diaspora population in the United States. About 1.5 million people of Dominican-descent live in the U. S., with populations concentrated in New York, Massachusetts, New Jersey, and Florida. Creating public diplomacy ties between Dominican workers and the United States’ Dominican population can better influence American corporations’ economic and social responsibility throughout the Dominican.

Counteracting the Dominican government’s conservatism, Dominican workers and USAS use extreme measures to enforce CSR, pushing American universities nationwide to sell more ethically-produced clothing, such as apparel manufactured by Alta Gracia. USAS campaigns until universities sign sweatshop-free clothing contracts and force their apparel companies to abide by new Codes of Conduct, enforced safety regulations, and unbiased factory monitors, such as the Workers’ Rights Consortium. We want American students and the national public to demand and require CSR on companies and their manufacturers.

As James Pamment described the new public diplomacy school’s “contemporary expectations of accountability,” USAS helps Dominican workers shift the implementation of CSR towards an international business standard. CSR is often abused as a company’s branding strategy to attract ethically-conscious consumers. If Dominican unions gain international attention through various online and media avenues, companies and manufacturers labor violations can be held liable on a global level for human rights infringements. And furthermore, the Dominican government and diplomats might be forced to evaluate and re-construct the country’s image – paying more attention to citizens’ well-being and demands, as well as the lack of internal controls on government corruption.