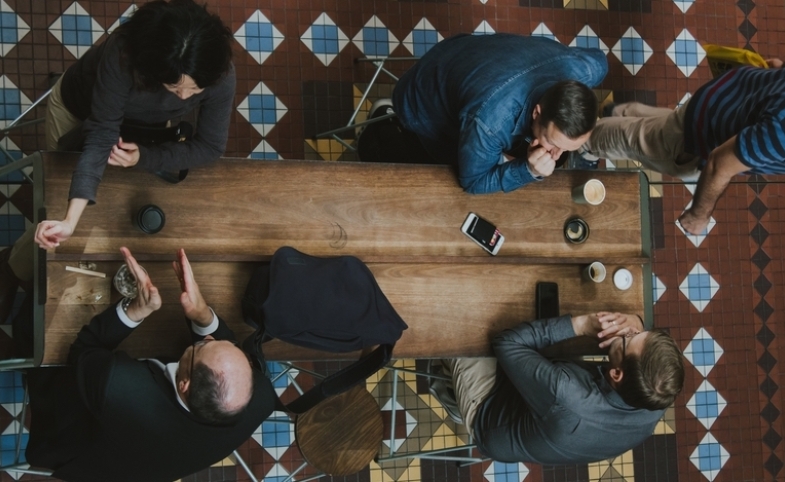 Once you become a public diplomat, office work at an embassy could overfill your day. How will you get away to meet with the right people? How will you make time for diplomacy?

You might say that with social media everything has changed, because that’s where our audiences are. You would be right but for the wrong reason: it has changed because social media’s dominance has made speaking face-to-face with influencers rare and priceless.

That is, if we remember how. Networking tools foster a myth that personal interaction is now dispensable. It’s more automatic to message the masses or drop an email into a congested mailbox than to leverage relationships to solve problems at a higher level.

Don’t get me wrong. You will play your part in the digital world. When those who admire or revile our government look for its policy positions they must be able to find them. But the choice of messenger is as important as the message itself: for some audiences, U.S. officials can be the least credible spokespersons for the very ideals that drive our policies. That is why public diplomats fly thousands of miles to live closer to, and build relationships with, the people whose words and actions carry weight with their own countrymen.

We and those contacts are just as human as ever, designed to respond more deeply while looking each other in the limbic system. Among the first meetings I asked for in one of my assignments was with a foreign government official. She was smart and determined—and so inspiring that I came to a later meeting with a proposal. We agreed on a multi-year reform effort to strengthen public opposition to corruption. I found funding and helped launch it across the country.

What about social media? This campaign made far better use than would have been possible from our own platforms.

In his book Deep Work, Georgetown CompSci professor Cal Newport describes the “any benefit” approach to networking tools: “You’re justified in using a network tool if you can identify any possible benefit to its use, or anything you might possibly miss out on if you don’t use it.” We have to be smarter than that. While our social media presence is a given, keep in mind that America’s passion for things digital is uneven abroad, where contacts still expect to meet with diplomats in person and mark us absent when we don’t show up. Some of the smartest among them think the global rise of the “any benefit” approach to digital diplomacy is crazy.

They’re not completely wrong. Look one day, if you can, at the busy schedule of a Chief of Mission, who sets the leadership example for her team: even the heavy Twitter user spends most of her day meeting with contacts. Is being effective the province of ambassadors alone? And if you hope to be one someday, is keyboarding the way to show you’re worthy?

When you spend entire days in bureaucracy or tweaking digital content, you will miss one chance after another to succeed at diplomacy, because the real influencers—the edgy thinkers with devoted local followings who are in the news and setting the agenda for online debates—are with other thought leaders in cafes downtown looking for new ideas.

You need to be there too.

So how do you make time for diplomacy? I have often gotten it wrong and won’t dare oversimplify a complex problem. It’s not a recent one, though. Even before the internet, you’d hear officers complain, implausibly, about being chained to their desks. Let’s just say things haven’t gotten easier.

Solutions must be tailored. But they all have a common start: then and now, the trick has been to accept that meeting contacts beyond embassy walls is a fundamental part of your job. After that, it’s a matter of prioritizing your meetings, planning them days in advance, and not doing everything yourself. Finally, you must fine-tune the balance between urgent office demands and long-term contact work.

That may be the hardest part.

You probably do your own scheduling now. Once overseas, delegate much of it to your foreign national colleagues. Learn to trust and rely on them. This is not optional. Your job as a manager will be capacity building, so loop them in and get their advice and buy-in. Invite them to your meetings with contacts (who are most likely their contacts.) They will respond with commitment.

What about your boss? You must be responsive—as a priority. She deals with nonstop crises and deadlines and other pressures, so you need to support her. But crisis planning is a virtue, and networking is crisis prep. So when you arrive at an embassy, start by meeting first-tier influencers—editors, communications officials, NGO reps, etc.—and let the boss know why. When you’re back, tell her what you learned.

Then phase in your second tier: in or out of a crisis, the most helpful contacts are often the least likely. Many of them are outside the capital, where most of the action is. So work in travel to other cities. You’ll find a rhythm and produce results. You think PD officers don’t write reports? Think again. Public diplomats have some of the most useful insights of anyone in an embassy. Reporting is the best way to show your value to the people up your chain of command who live for the written word.

The tiered approach pays off. Early in one of my tours, a big terrorist attack occurred in another country, and our boss wondered why local opinion leaders hadn’t openly condemned it. My colleague called her first-tier contact, a religious leader, who also thought it was odd and denounced the attack in a TV interview that same afternoon.

As for the work that will stack up while you’re gone… prioritize and adjust. Getting out of the office gives you fresh perspective when you return. If it’s not working that way, or if being out-and-about is preventing others from meeting their deadlines, then your priorities may be out of balance. Teams work better than the sum of individuals: rely on your American colleagues to cover for you, and be sure to repay them in-kind.

The world has decided that mobile devices are the answer to our busyness problem. Watch out. We use them to make it worse. Stay in touch, but if you’re going to check your smartphone every two minutes, you might as well not leave the office. Remember, there’s a reason for talking face-to-face. And when you tie up your brain with emails and clickbait before, during, and after your meetings, you sacrifice the very thinking that leads to breakthroughs.

You are doing well to learn about PD first through academia. This is the time to think through its greater purpose and your role in it. Later, in the field, you may worry you are too busy, or too far down the food chain, to pursue the kind of contact work that might one day take you to the senior levels of the Foreign Service. That’s when the thinking you do now will come to your rescue.

But please remember: it’s the future of countries at stake, not just your career as a public diplomat. Your ability to access the brain power holding foreign public sway could help secure peace and progress for millions. Make time for it.

Now that you’ve learned about public diplomacy (PD) as a student, how would you spend your time overseas as a public diplomat? Staring at an office computer? Or kicking around big ideas with the country’s bloggers,...