Reflections on the Thirty Years War and the Origins of Propaganda

Before public diplomacy, there was propaganda, a term coined by Pope Gregory XV in 1622 when he founded a new college to train missionaries to be sent to Protestant Northern Europe, Asia, and the New World. In this context, it is often noted that the Pope’s intention in making his new congregation responsible for ‘propaganda fide’-literally, propagating the faith-was not to endorse a shared information policy based on deceitful practices. Rather, the connotation of this first use of the term ‘propaganda,’ and its meaning until the twentieth century, was a value-neutral one. Propaganda was not about mind-control or robbing the masses of their ability to rationally respond to facts by denying them full and unbiased information. Propaganda was simply an acceptable process of exhortation on behalf of a cause; the term did not acquire its nefarious connotations until sometime between the First and Second World Wars. So say the conventional, one-line references to the etymology of the term ‘propaganda,’ generally appearing in contemporary accounts of the history of public diplomacy.

There is no question that popular consciousness of the power of propaganda did emerge in force after World War One. But one wonders whether Pope Gregory’s intention to propagate the faith not was quite as innocent (to borrow the moniker adopted by his successor’s successor) as such brief allusions to the coining of the term propaganda might suggest. I have been prompted to ask this question as a consequence of some recent reading into the historical context of Gregory’s announcement. Though it may be rather pernickety to observe that one-line etymologies of ‘propaganda’ are simplistic, the history of statecraft and public opinion in the seventeenth century is nonetheless fascinating and worth thinking about more deeply. Gregory’s initiative in establishing this new congregation occurred four years into one of Europe’s most pivotal conflicts. The Thirty Years War began a dispute between the Hapsburg dynasty and the Protestant monarchs of Northern and Central Europe over the succession in the kingdom of Bohemia that rapidly spiraled into a generalized struggle for geopolitical influence made rancorous by schisms over religious dogma. By the end of the conflict, almost every European kingdom had been represented on the field of battle. It is estimated that around a quarter of Europe’s population died as a result of fighting, starvation and disease. The war’s settlement, the Peace of Westphalia, is well known to International Relations scholars because it was at this conference that the modern doctrine of state sovereignty was first endorsed.

The Thirty Years War was, to borrow the language of the historian Peter H. Wilson, also a ‘media event’ (2009: 824). The world’s first regular newspapers had been established between 1605 and 1609, and the war itself massively and irrevocably increased Europe’s newspaper consumption. Mass production of newspapers and pamphlets had been aided by the introduction of copperplate printing. Newly established regular postal services also enabled their distribution. These publications also had a large effect, via word of mouth transmission of new stories and by the vividness copperplate images, on the opinions of the illiterate masses of Europe. Some of Europe’s earliest censorship laws, instituted in response to religious controversies almost a century earlier, were revised or extended to address the subversive potential within these new media formats. But it is also clear that many of Europe’s monarchs welcomed these new publications as vehicles for the circulation of their official decrees and pronouncements. 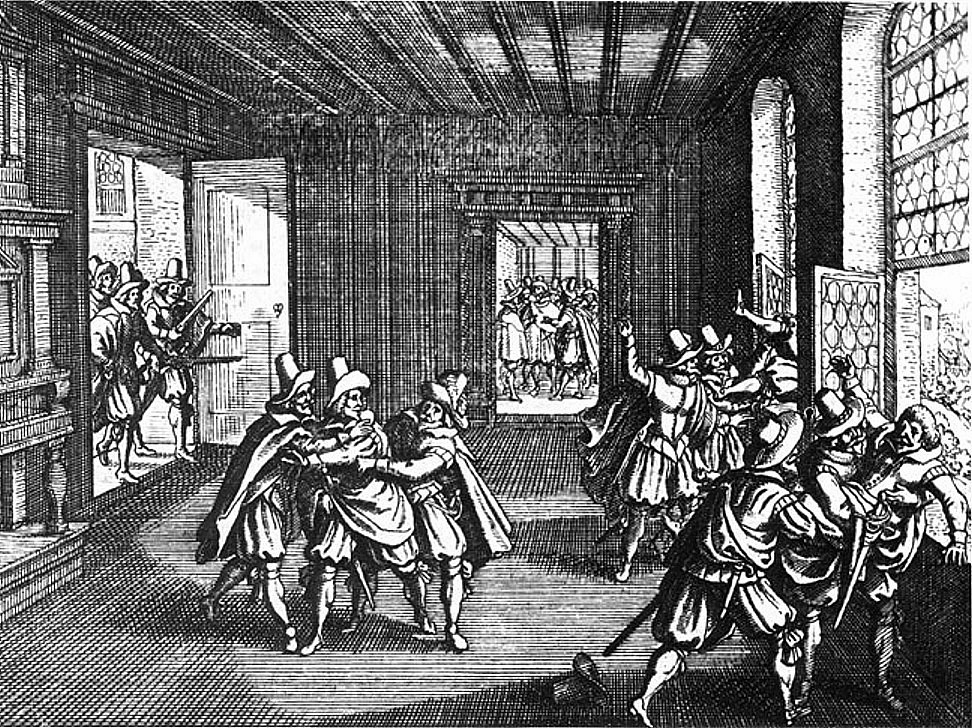 The Defenestration of Prague

In 1620, for example, Archduke Albert of Austria issued a license to the Antwerp newspaper publisher Abraham Verhoeven to ensure the publication of war news favorable to the Habsburgs (Wilson 2009: 826). In the summer of that year, the Habsburg cause was damaged by the seizure and publication of compromising letters from its chief military adversary, the Elector of Palatine. The Habsburg side took revenge the following year by publishing a set of confidential letters seized on the battlefield, which were circulated in both German and Latin, and damagingly outlined the Elector’s plans to encourage an Ottoman invasion of Habsburg territories. Such campaigns continued for the duration of the war, with each side attempting to undermine the alliances built by the others through the circulation of embarrassing or compromising documentation.

Increasingly, leaders on both sides “took great care to engage the most able of the intellectuals in their service to edit these works, write authoritative responses to the other side’s revelations, and go onto the offensive with their own propaganda pamphlets” (Malcolm 2007: 32). The articles of propaganda that were circulated over the course of this struggle for the allegiance of Europe’s elites ranged from faithful reproductions of official correspondence to outright fabrications. Perhaps the most famous of these fictions, again dating from 1620, consisted of forged minutes from a meeting of the Spanish Council of State spelling out Spanish intentions to ferment instability in England that was widely believed to be true. The conflict also fostered a genre of writing that blended fact and fiction to achieve the effect of a subtle satire: explications of the enemy’s objectives were contrived as records of the “most secret deliberations of princes and their counselors” (Malcolm 2007: 35). Polemical pamphlets were often lavishly illustrated and written in verse.

A key observation to make regarding the Pope’s call for the propagation of the faith in 1622 is that the advent of the printing press, the rise in literacy brought about by an emerging entrepreneurial middle class, and the religious controversies that had exploded in response to the doctrines of Luther and Calvin had already created a European sphere of public comment and opinion by the turn of the seventeenth century. Furthermore, the entrepreneurs who ran the printing presses, the newspaper- and pamphlet-reading middle class, and, in particular, the political leadership in cities such as Strasburg, Frankfurt, Vienna and Antwerp were increasingly aware of the connection between information, ideas, and military/diplomatic influence. All of this appears to have occurred before the Pope’s announcement of his intention to found a college for the training of Catholic missionaries.

Most interesting is the point made by Noel Malcolm in his introduction to a reprinting of Thomas Hobbes’ translation of a Habsburg propaganda tract produced during the 1620s: the type of information circulated by both sides during the Thirty Years War, in particular the leaking or fabrication of official documents, exposed the ‘arcana’ of diplomatic pragmatism to the European public in a dramatic and unprecedented way. “As the Thirty Years War progressed, much of Europe became, as it were, a huge public laboratory in which the theories of reason of state- where high politics, diplomacy, and the use of armed force were concerned- could be tested and demonstrated’ (Malcolm 2007: 31). The vehicle for such public awareness of the pragmatics of statecraft was this emerging system of print propaganda and official information/disinformation.

Pope Gregory’s establishment of a college to train Catholic propagandists occurred at a time when sophisticated war propaganda formats had already been adopted by the European powers. The mobilization in a range of propaganda formats of the emerging principles of ‘reason of state’—the doctrine the interests of government must be executed with utmost pragmatism and transcend the confines of morality—and their extensive use by other actors during the Thirty Years War show the rich history of propaganda in the period.

2011 brought many things to light through public diplomacy in the news, including the growing understanding that civil society is becoming more and more significant with every passing day, month, year and decade. With ...