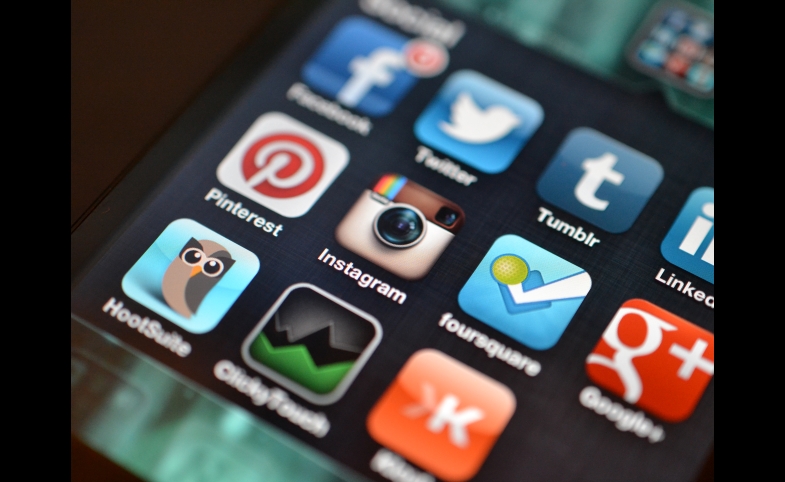 Is Resistance Futile? Maximizing the Impact of Public Diplomacy on Social Media

One of the most sought after metrics in social network analysis is influence. Finding out who the most important users are in the network and how they leverage their influence online is of great value for maximizing the impact of one’s message on social networks. Degree centrality (DG), which reflects the number of relations a user has, is one common tool used for gauging online influence and it comes in two forms: in-degree centrality, which is indicative of the number of users that may potentially retweet the node’s messages (how many users follow a node), and out-degree centrality, which reflects the number of users the node may potentially retweet (how many users the node follows). The Eigenvector centrality indicator (EC) goes a step further. If DG asks how many people could retweet a message, EC gives a measure of the importance of those who retweet your message (Kumar et al.,31). The stronger the influence of one’s followers, the higher one’s Eigenvector centrality in the network. One can develop even more sophisticated measures of online influence by combining these indicators with the Klout score, which ranks users according to their aggregated influence on multiple social networks.

Degree centrality, in its various incarnations, is clearly a useful instrument for assessing online influence, one that needs to be properly understood and accurately measured if one’s digital message is to have a reasonable impact on social networks. At the same time, DG comes with a major limitation as its focus on influence projection takes little account of the possible sources of resistance in the information flow. In other words, it matters to have your message projected widely by influential nodes, but it is equally important not to have your message obstructed or blocked by other nodes in your network. The concept that captures possible points of resistance thorough a network is betweenness centrality (BE), which measures the number of shortest paths a user allows a message to travel (Kumar et al., 32). Simply put, BE helps locate gatekeepers in the network; that is, those who have the capacity to control the flow of information thorough the network, either by enabling or blocking it.

Digital influencers and resisters are therefore two sides of the same communication coin: both need to be taken into account so that one’s message can be disseminated widely and freely. As a way to illustrate these points, let’s examine the case of the Twitter conversation about the African Union’s (AU) decision on Dec 18, 2015 to send 5,000 peacekeepers to Burundi to stop deadly unrest there from deteriorating further over President Pierre Nkurunziza’s extended tenure in office. For the purpose of this analysis, 2529 tweets were collected on Dec 20-23, 2015. The graphs shown further below have been designed with Gephi, using the ForceAtlas2 algorithm. They follow a blue-red color scheme, whereby the most relevant nodes are associated with red, the least relevant with blue, and those in between with green or yellow. Should an African Union digital diplomat be interested in understanding how best to defend the AU position on social media, she/he would have to take notice of two important developments.

Degree centrality, in its various incarnations, is clearly a useful instrument for assessing online influence, one that needs to be properly understood and accurately measured if one’s digital message is to have a reasonable impact on social networks.

First, the nodes with the highest potential for broadly disseminating the message through their communities of followers are represented by Al Jazeera English (@AJEnglish (2.88M followers, in red), followed by Inside Story (@AJInsideStory, an Al Jazeera program with 11.3K followers, in orange) and to a lesser extent (yellow nodes) by Ty McCormick (@TyMcCormick, Africa Editor of @ForeignPolicy magazine; 3.8k followers) and @guardian (4.93M followers) (see Fig 1). This means that if these nodes decide to comment on AU tweets, the message may reach deep into the network via the second or the third layer of followers. For example, retweets from these nodes could create impressions for most of the users in the lower part of network (the highlighted area). This does not mean, of course, that the message would be positively received or even followed, but being “out there” in the thick of the conversation would be a significant achievement in its own right. The importance of these nodes is confirmed by the Eigenvector centrality score, which closely overlaps with that of in-degree centrality in this particular situation (see Fig 2). 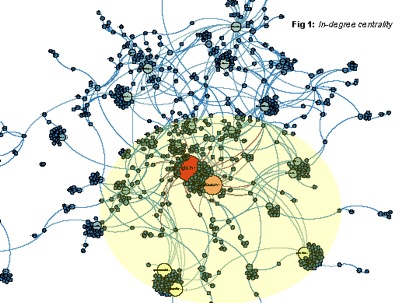 Second, both Fig 1 and 2 reveal a disconnection between the upper and lower side of the network (marked by the red line of division), as if the two communities barely engage each other. This invites the question of how to locate the most suitable node(s) to serve as a bridge between the two sub-networks. 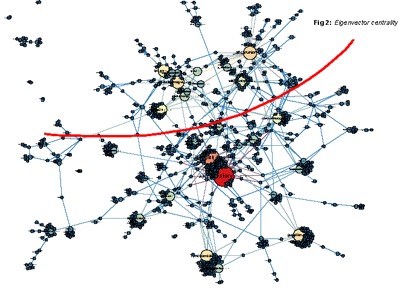 The out-degree indicator (Fig. 3) is only marginally useful for this purpose. The red color nodes (@carefor_burundi, @isaqasi, @OnevoiceEA) represent activist groups concerned about the political situation in Burundi. They do bridge the two parts of the network, especially @OnevoiceEA (3,67K followers), by regularly posting tweets on the topic. However, their tweets are not much followed by the other users. 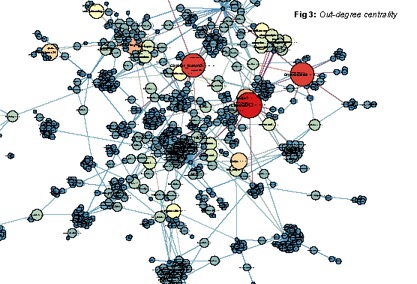 The betweenness centrality offers a more promising bridging solution (Fig 4). It identifies @PDWilliamsGWU (Associate Professor of International Affairs at Elliott School of International Affairs, 2.1K followers) as the central node that can block or enable the flow of information between the two parts of the network (see highlighted area of potential influence). He is well connected with followers of the main influencers, but not directly with them, hence his strategic position as a potential network resister/enabler. 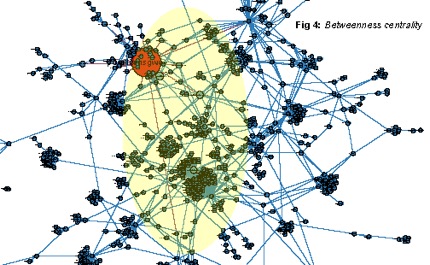 To conclude, both influencers and resisters need to be cultivated in order for digital public diplomacy to maximize its impact. For AU digital diplomats, for instance, the ideal networking combination should include a close digital connection with @AJEnglish @AJInsideStory, @TyMcCormick, @ForeignPolicy @guardian  (ID), possibly with @OnevoiceEA , but critically with @PDWilliamsGWU. It should be also noted this is a dynamic, not a static, process, and hence the analysis has to be reiterated and updated regularly in line with the pace of the online conversation.