Home|Russia’s Victory Day as a Vehicle for Disinformation 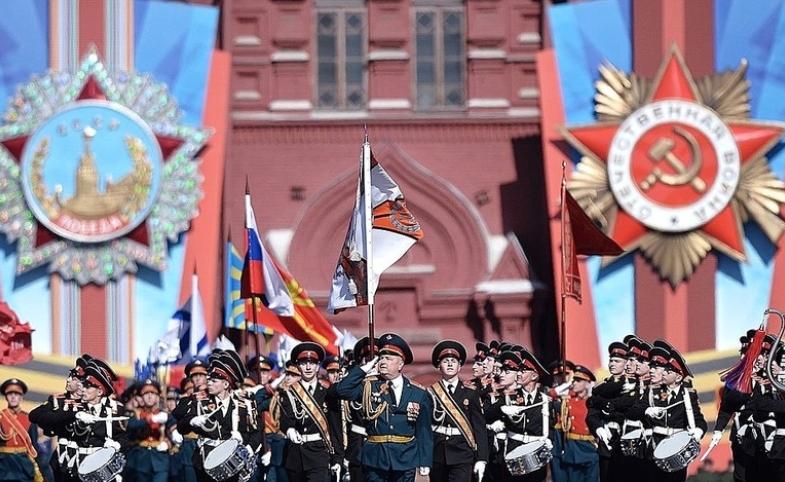 Russia’s Victory Day as a Vehicle for Disinformation

During my spring 2018 semester abroad, I came across an opportunity to visit a fellow student studying in Saint Petersburg. The ongoing Russian narrative of being a great world power was evident from the moment I stepped foot into the city. Monuments such as The Narva Gate and the Alexander Column celebrate Russian victory over Napoleon’s France. Upon my visit to the world-famous Hermitage, I came across an entire room filled with paintings dedicated to brave Russian soldiers who died fighting Western European countries.

These grand displays are visible demonstrations of domestic Russian nationalism within Russia. However, Russia seeks to establish this same sense of homegrown nationalism in nearby states that appear vulnerable to Western influence. This goal is furthered every year on May 9, otherwise known as “Victory Day.”

Victory Day is a public holiday that marks the Russian victory over Nazi Germany, honoring Russians who lost their lives between 1941 and 1945. Widely celebrated throughout Russia, one-third of the population claims it as the most important holiday of the year.

However, rituals and rhetoric associated with Victory Day have recently shifted. Notably, President Vladimir Putin has introduced a new connotation surrounding the holiday’s events. Speeches have gravitated toward celebrating the country’s victory instead of remembrance for the great loss of life. In 2017, Putin demonstrated this national pride, stating, "We feel a piercing blood relationship with a generation of heroes and winners.” These words create distance between Victory Day and the negative consequences of Russian victory in WWII. Instead, the characterization of Russians as “a generation of heroes and winners” fits the narrative of being a world power.

It is no coincidence that the disinformation campaign surrounding Victory Day has permeated beyond Russian borders.

Additionally, Putin has utilized Victory Day to showcase Russia’s military strength by parading new weapons systems through Moscow. Many scholars have noticed this shift. Denis Volkov, a sociologist at the Levada Center noted, “The appointment of a purely symbolic date, stripped of unnecessary negative connotations, results in the fact that the more distant the event in question becomes, the more it is devoid of a historical context.” By twisting the historical context of Victory Day, emphasizing the nation’s military power and refusing to acknowledge the negative aftermath of WWII within Russia, Putin has successfully turned Victory Day into a vehicle for nationalistic propaganda.

It is no coincidence that the disinformation campaign surrounding Victory Day has permeated beyond Russian borders. It is promoted elsewhere such as Georgia, Crimea and Belarus to both strengthen the feeling of Russian identity in states with large ethnic Russian populations and to frighten those who may be forming relationships with the West.

Russia’s encouragement of Victory Day in these former Soviet Union republics have influenced these modern populations to celebrate on the same day as Russia and to participate in the same traditions (such as wearing orange St. George ribbons).

Additionally, Victory Day is full of WWII reminders of the  distrust they should feel toward Western Europe. On Victory Day in 2015, Serbian President Tomislav Nikolic, stated, “Serbia will never damage relations with the Russian Federation, even for the sake of becoming a member of the European Union.” On the other hand, in 2007 when Estonia attempted to remove a Soviet WWII monument from Tallinn, the country was the target of a large-scale cyber attack that continued throughout Russia’s Victory Day. Russia’s use of this holiday to promote itself as a supreme power and to solidify Russian pride in surrounding regions complements the ongoing disinformation campaign across the Balkan region.

According to CPD Faculty Fellow Vivian Walker, the strategic goals behind Russian propaganda efforts in the Balkan region are to establish the concept of a “Greater Russia,” to perpetuate Euro-Skepticism and to establish Russian national identity outside of Russia. Victory Day offers the perfect soft power opportunity to promote these ideologies throughout Eastern Europe. Walker notes that Russian disinformation campaigns in Georgia can affect identity, e.g., “to be Georgian is to be Russian.” Promoting the popularity of this shared public holiday increases Eastern Europeans' affinity toward a Russian identity. Victory Day is leveraged to promote Russian influence through attraction rather than coercion.

Victory Day is an enormous celebration for those in Russia and for its former satellite states. Although the holiday may at first seem innocuous, the Kremlin has manipulated it to be an extremely useful tool in promoting Russia’s strategic interests within the region. For many Balkan states, Victory Day is a reminder that it is safer to stick with Russia—a country they have cultural ties to—rather than create ties with the West.