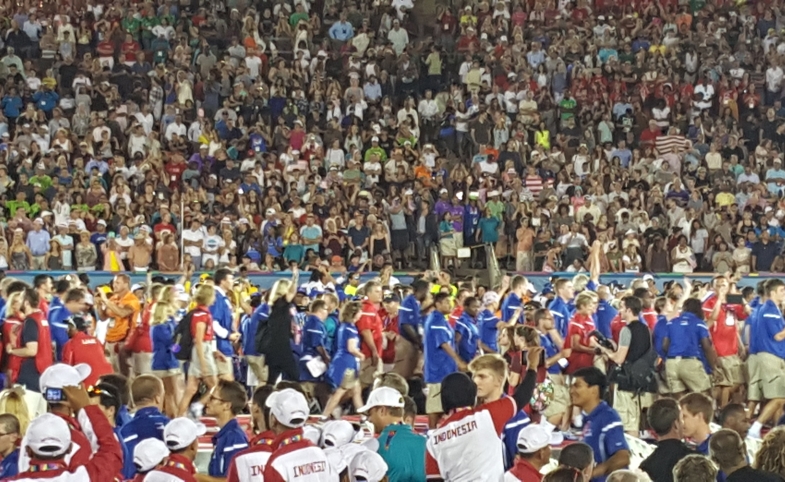 The joyous Opening Ceremonies of the Special Olympics 2015 World Games was a public diplomacy triumph. With 6,500 athletes from 165 nations, transmitted for the first time over an ESPN live broadcast, it has an impact that in many ways exceeds that of the Olympic Games. The sweetness and innocence of the event gives it a power and persuasiveness that is missing from elite, professionalized, nationalized sport. Prior stagings of the quadrennial World Games have had significant impacts on attitudes and legislation dealing with disabilities in many countries. Now, larger than ever and broadcast from America’s media capital, its effect will surely be magnified.

I attended the previous World Games in Athens in 2011, and have been involved in the preparations for these Games since they were awarded to Los Angeles shortly thereafter. Last night I had the privilege of entering the stadium with the team from Denmark. I can tell you the spirit of the athletes embodies what is best in international (or local) sports competition. The athletes are having a great time. They understand that these are games, not careers. They want to win, but they are here to play, win or lose; and to enjoy it all. The experience is not just on the field of play, but through the entire two-week event in which they are treated as the valued people they are. After arriving early last week at LAX, each team went to a host city who feted them as honored visitors. The Danish team was hosted by Solvang, California, our own California piece of Denmark in the gorgeous Santa Ynez Valley. Stuffed with pastries, they had a ball. Now they are ready for the big time in Los Angeles and the Ceremonies were a thrilling start.

As public diplomacy, the Special Olympics transmit a message that focuses on people with intellectual disabilities, but transcends that priority to advance the idea of inclusion to cover all peoples who suffer exclusion. It is a necessary and important project in which the USA is ahead of many other nations. It began in the United States, is based here, and has its greatest participation here. But it has grown quickly abroad, as shown by the enormous teams entering the Coliseum from places such as India and China, where the treatment of the disabled has traditionally been cruel. Special Olympics is an American import that is an unalloyed good. It does not arouse suspicions of ulterior motives, as we see even in vaccination programs.

By modelling itself after the Olympic Games, from the parade of athletes to the athlete’s oath, it adopts an international model that avoids the impression of American ownership, while espousing the American moral idea that “all men are created equal.” The Olympic Games model also elevates the importance and coverage of the event and the athletes’ zeal to participate. Occasionally holding the Special Olympics World Games in the U.S., as we are doing now, restates the American embrace of the value of inclusion without sacrificing the neutral international nature of the message. It gives the Los Angeles public the opportunity to demonstrate its commitment to the values of Special Olympics. It presents First Lady Michelle Obama as a very effective spokesperson for the ideals of the event. All of this without a heavy hand of government involvement, either on the surface or in the financing of this mostly privately funded celebration.

Special Olympics is an American import that is an unalloyed good. It does not arouse suspicions of ulterior motives, as we see even in vaccination programs.

Of course, it is always good for a nation’s brand when the nation does nice things. The U.S. Navy is the first responder for earthquakes, tsunamis, etc. all over the world. USAID and private U.S. charities play major roles in alleviating suffering globally. People are often grateful, but the long-term impact is hard to measure. Special Olympics has changed people’s lives by example in ways that can be seen and measured in local legislation about access, educational opportunities for the disabled, and by the spread of the movement. This is an American initiative and it is known to be such. We can hardly do better.