Home|Sports, Technology and Diplomacy at Tokyo 2020 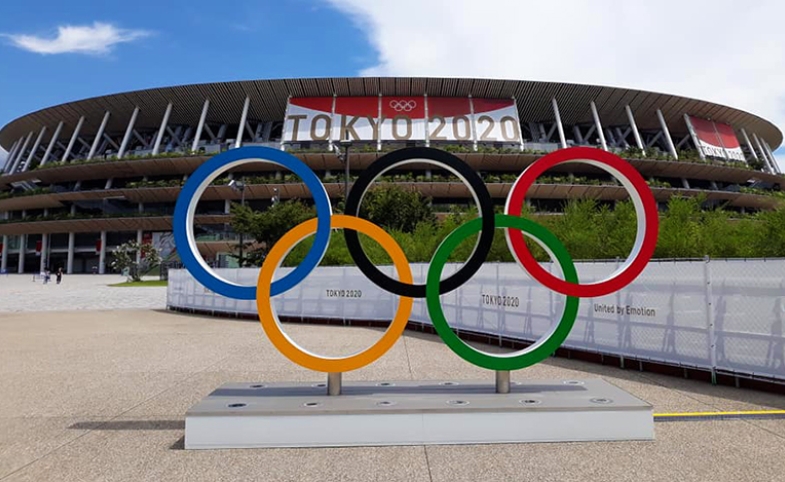 In one of the most amusing parts of the closing ceremony of the 2016 Olympic Games in Rio de Janeiro, Shinzo Abe, then-prime minister of Japan, promoted the Tokyo 2020 Olympic Games coming out dressed as Super Mario, a reference to the cultural and technological contribution to the world and giving a taste of what was planned in four years. Despite the pandemic and the postponement to 2021, Japan managed to host the 2020 Olympic and Paralympic Games, but under strict restrictions that had an impact on some of its nation branding and public diplomacy possibilities. My research project for USC Center for Public Diplomacy focuses on sport-tech diplomacy and the use of technology for nation branding and public diplomacy during the Tokyo 2020 Olympic Games.

From a functionality perspective, part of the reason why and how Japan managed to host the Olympic Games during the pandemic was the use of different technologies to try and limit the spread of COVID-19. In the months leading up to the Games, The Tokyo Organizing Committee of the Olympic and Paralympic Games (TOCOG) and the International Olympic Committee (IOC) published several versions of The Tokyo 2020 Playbooks, guidelines of instructions for athletes, media, international federations, marketing partners and other stakeholders. The Playbooks introduced some of the digital platforms and mobile applications used at the Games. The Infection Control (ICON) system was used to monitor accredited stakeholders and was linked to the Online Check-In and Health Report App (OCHA) and to the Contact Confirming Application (COCOA) that each stakeholder was required to install on their smartphones before or upon arrival. Either directly or through the organization’s COVID Liaison Officer (CLO), stakeholders needed to update their daily temperature, receive their COVID-19 test results and were monitored by TOCOG during the Games.

Other uses of technology for functionality purposes included digital temperature checks in entry points to venues; for media, The Games Family Application was used to give participants real-time information about transportation; and in press conferences for translations, instead of handing headphones to international journalists, members of the media needed to scan a special QR code. All these digital systems and applications enabled Tokyo to host the Olympic Games.

The 1964 Olympic Games were used to reposition the Japanese image from a devastated country after World War II to a technological and innovative powerhouse. Some of the new innovations that were exposed during these Games ranged from the bullet train to the first satellite broadcasting system and to the introduced pictograms. The design of the Tokyo 2020 Olympic Games were supposed to correspond with the legacy of the Games in 1964 and expose new Japanese innovations. The original plan was to focus the branding of Tokyo 2020 as the recovery and reconstruction games after the 2011 earthquake, tsunami and Fukushima Daiichi nuclear disaster, but due to the outbreak of the pandemic, the narratives and priorities changed. 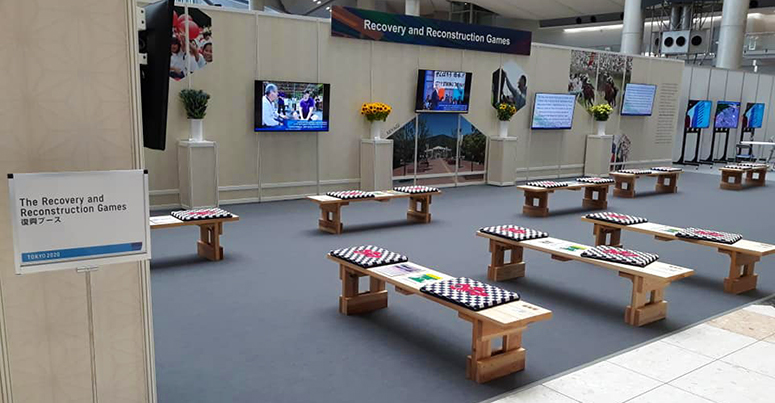 An area in the Main Press Center was dedicated to the recovery and
reconstruction efforts from the 2011 Tsunami and Fukushima Nuclear Disaster.
(Photo by Yoav Dubinsky.)

With that said, TOCOG still emphasized the use of new innovations such as field-support robots, a face-recognition system at security checkpoints and new broadcasting technologies. The international sports innovation group Colosseum analyzes the sports-tech ecosystem and divides the Startup Nation Map into six fields: athlete development, fan engagement, smart stadiums, health and fitness, gaming and esports, and media and broadcasting. Without having international fans, the Games much depended on innovative broadcasting technologies, including the use of artificial intelligence-based 3D Athlete Tracking technology developed by Intel and Alibaba, and other new technologies such as multi-camera replay systems, live and on-demand immersive 180° stereoscopic and 360° panoramic coverage, and virtual 3D graphics in the newly introduced event sport climbing and others.

From a corporate diplomacy perspective, several Japanese technology companies were involved in the Games and provided tech services. Canon, for example, provided support for photographers. Panasonic provided tech services in several of the stadiums and in the Media Press Center. Toyota provided hybrid cars and automatic self-driving buses as part of TOCOG’s attempt to show the Games were hosted in a sustainable way. There was also certain backlash for sponsors, as after TOCOG announced there would not be local fans attending the Games and amid the growing protests in Japan against the Olympics, Toyota scaled back some of the advertising during the Games, and Panasonic announced that the CEO would not attend the Opening Ceremony. Another backlash occurred when one of Toyota’s self-driving vehicles collided with a visually impaired athlete in the Olympic Village during the Paralympic Games, leading the company to suspend the buses’ services.

From a cultural diplomacy perspective, TOCOG’s ability to use the Olympics to showcase Japanese culture and enhance the aesthetic dimension of Japanese technology as part of Japanese culture was somewhat limited. The opening and closing ceremonies, which usually give hosting countries an opportunity to showcase their history and culture, were relatively reserved in Tokyo. In the Opening Ceremony there was a drones display that demonstrated some technological capabilities and a segment on pictograms that referred to the creative innovations introduced in the 1964 Tokyo Olympic Games, but cultural references such as the popular video game characters from the closing ceremony in Rio were not used. Furthermore, because of the restrictions, stakeholders were very limited in their movement, mostly being able to attend Olympic venues that limited in-person nation branding opportunities. That prevented Tokyo from an opportunity to expose tourism destinations and limited access to cultural events in which technological innovations could have been exposed. However some cultural-related activities were available digitally. In previous Olympics, some participating countries often have Olympic Houses to showcase the country’s culture, food and product while holding different watch parties or hosting sponsors, stakeholders or the public. In Tokyo, due to the lack of international fans and the strict restrictions on international stakeholders, such nation branding opportunities were very different.

With the Tokyo 2020 Olympic Games having just ended, it is too early to determine their short-term or long-term impacts on Japan’s image, or even if the health and financial costs outweighed the benefits of not canceling them. What can be said with a certain measure of assurance is that despite the pandemic and the related challenges, Japan did manage to host the Games to completion, with technology playing a functional role in their production and organization. With that said, the implications of COVID-19 and the strict restrictions by TOCOG and the IOC limited the ability of Japan and participating countries to fully use the Games as a soft power tool, including limited use of technology for cultural and corporate diplomacy.

In the next decade, the United States is set to host two of the globe’s biggest sporting events—the 2026 FIFA World Cup and the 2028 Olympics—in addition to a multitude of smaller events. It is critical that cities are able...