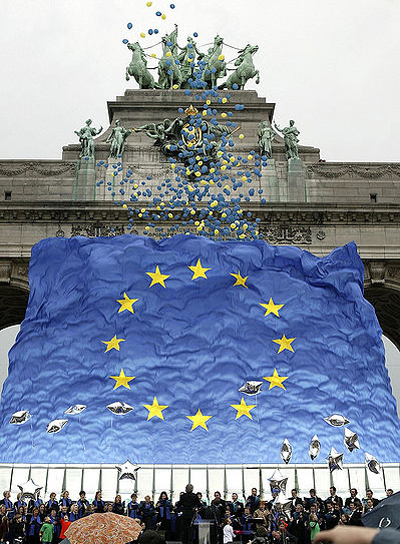 How should Europe present itself in this age of smart power and public diplomacy? I suggest three images that Europe could strive to promote to foreign audiences, especially the US.

First, following from the EU motto, Europe’s image should be “united in diversity”. Europe is undoubtedly diverse, but its unity under the EU is under-appreciated and far too often not a part of public diplomacy efforts. For several decades now, European leaders have acknowledged that Europe is stronger when it works together, and they have made real progress in following through with this idea through literally thousands of policy initiatives. But this reality is not promoted enough to outsiders. External messages tend to be national in origin, and rarely convey the fact that each member state is embedded in the EU. This image of “united in diversity” should also include a stronger message that Europe’s diversity often emanates from its sub-national societies – the regions, localities, and cities within member states. And these cultures, identities, and traditions are not just those of the past, but are forward looking. Europeans tend to be too critical of themselves and cynical about the integration project, and this contributes to misperceptions among foreign publics.

The second image Europe needs to project is that it does not just talk, it acts. The EU should promote the areas where its values and actions coincide, and where it has an autonomous impact, such as humanitarianism, environmentalism, democratization, crisis management, and development. For example, more people in the world should be readily aware of the fact that the EU is the biggest donor of development aid by some measure, and has a robust and growing Common Security and Defense Policy. For every achievement in these areas, a strong public diplomacy message is required. Otherwise, such influence goes unnoticed. In this multipolar world, it is important for Europe to make known its values so that it can contribute to the strengthening of an international system that values cooperation, transparency, multinational institutions, stability, and the rule of law.

Third, Europe’s image should be one of a smart power. It effectively combines both hard and soft power through its comprehensive approach to crisis management, access to its single market, and processes of enlargement, among other things. Military power matters less than it once did, and Europe has a wide range of means to exercise power and influence, stemming from a host of diplomatic, economic, normative, military, and civilian policy instruments. As a result, Europe is far better positioned to play a leading role in the 21st century than any other actor in the international system. But as Jeremy Rifkin argues, Europe’s leaders do not yet recognize this. Through promoting a smart power image externally, realization of Europe’s role and responsibility in the world will become ever more apparent. This, of course, promises substantive dividends in respect of the global challenges of the present era, but also an elevated internal sense of purpose.

What role can the European External Action Service (EEAS) play to bring perceptions more closely in line with reality? What role can cultural networks like EUNIC play? I would suggest that the EEAS and EUNIC can have a significant impact in enhancing mutual understanding, each through a different approach. There are at least two major strategies of public diplomacy: hierarchical and network-based. A hierarchical approach conveys messages that are centrally generated and typically informational in nature. A network-based approach is one that involves mutuality, or two-way communications. It is based on the formation of transnational networks that promote all of the actors involved. Although it has become more popular in recent years to adopt networked approaches to public diplomacy, both strategies are necessary for Europe. In particular, the EEAS can engage in a top-down or hierarchical approach to promote Europe, and EUNIC can capitalize on a more network-oriented approach.

Hierarchical messages are necessary to rectify the knowledge deficit that exists. A significant percentage of foreign publics do not understand the European project of enlargement and integration, and many are not even aware of it. Yet, there is so much about Europe that is attractive to foreign publics as a result of the EU – its multilateralism, democratic values, emphasis on international cooperation, and devotion to peaceful conflict resolution, to name a few. The EEAS is particularly well-suited to “explain Europe” to foreign publics through its 136 European embassies around the world. Informational programs can target civil society organizations, as well as academic, policy-making, and business communities. But the EEAS must listen at the same time. The new, twenty-first century, supranational diplomats must emphasize such skills as cross-cultural interpretation, two-way education, and outward orientation. The ideal European diplomatic service will have the ability to empathize, to share interpretations of the world through history, language, or culture, and to recognize their diplomatic counterparts as equals. Thus, although there must be a hierarchical component to messaging aimed at communication, information dissemination, and enhancing understanding, there should still be a two-way dialogue that goes well beyond traditional diplomacy.

At the same time, EUNIC can engage in network-based public diplomacy for which the aim is to expose Europe’s diverse cultures, languages, identities, and traditions alongside promoting its partners. Cultural diplomacy through a networked approach does not have to convey a particular message as it is based on engagement with others in the network through person-to-person contact to promote mutual understanding. Goals can be identified and achieved organically, as they evolve. Europe’s cultural institutes are ideally positioned to compliment more hierarchical approaches to public diplomacy. Since Europe is one of the top destinations for visitors in the world, cultural diplomacy can actually happen at home, even while it is directed at foreigners. When visitors come to Europe, they should perceive a society rich with culture that is shared and appreciated across nations. Nick Cull has recently argued in an article published in the CPD Blog (26 July 2010) that cultural diplomacy works best when it has some distance from the governments involved. He argues that cultural strategies can include: (1) a “prestige gift” that showcases the best artistic talent and products of a society, (2) “cultural information” that highlights under-recognized elements of a society’s culture, (3) “dialogue and collaboration” that involves international artists in the co-creation of art, such as through participatory international music festivals, and (4) “capacity building” that builds cultural skills, like language, in a particular target audience.

Cultural diplomacy may seem to be far removed from the high politics of alliances, international law, rising powers, and new security challenges, but it is a central part of all international relationships. It leads to the glue that holds alliances together, the credibility that supports international law, the values that convince rising powers to be more transparent, and the trust that enables societies to cooperate in solving the most pressing issues in today’s world. Identity, policies, and image all stem from a society’s culture. And this is particularly true in democracies where public opinion matters and cultures are enduringly diverse. This two-pronged approach of both hierarchical and network-based public diplomacy is necessary going forward so that a fruitful balance between unity and diversity can be achieved. Europe’s strength and attractiveness come from its diversity and values, but for it to have real influence in the international system, it must also project a credible, coherent image.

The choice of the United States as a target audience may not be in line with current European priorities, but it should be. As I have already described, there are wide-ranging and serious misperceptions that need to be corrected. It is undoubtedly in the strategic interest on both sides of the Atlantic for Americans to better understand Europeans, and vice versa. The transatlantic relationship is the most important and enduring alliance in the international system today. And in this multipolar world, with rising and often unpredictable powers, Europe and the US must now work together to have a global impact and promote their shared values. “Strategic interest” and “power” should not be regarded in negative terms. When put in context they mean stronger ties among friends and making the world more transparent, democratic, peaceful, and stable.

It may seem to be more in line with European values for the EU to engage in public diplomacy in its own neighborhood, and with developing countries. These priorities must certainly not be neglected. However, a renewed level of cultural exchange with the United States is an important and indispensable part of closing the gap between reality and perception within the world’s most important strategic and economic alliance. If Americans come to understand Europeans better they too can promote Europe, as they should. After all, as former Commission President Romano Prodi recently said, “Promoting Europe is promoting also the American interests.” But for its part, Europe can take the lead in promoting itself, and mutuality will likely follow. Indeed, Europeans must realize that they are not only capable of leading the 21st century, they have a responsibility to do so.

Image: Celebration of EU enlargement on May 1, 2004, in Brussels' Parc du Cinquantenaire

This is Part 2 of an article that will be published in the 2011 edition of the annual Cultural Report Progress Europe series. Read Part 1 here.