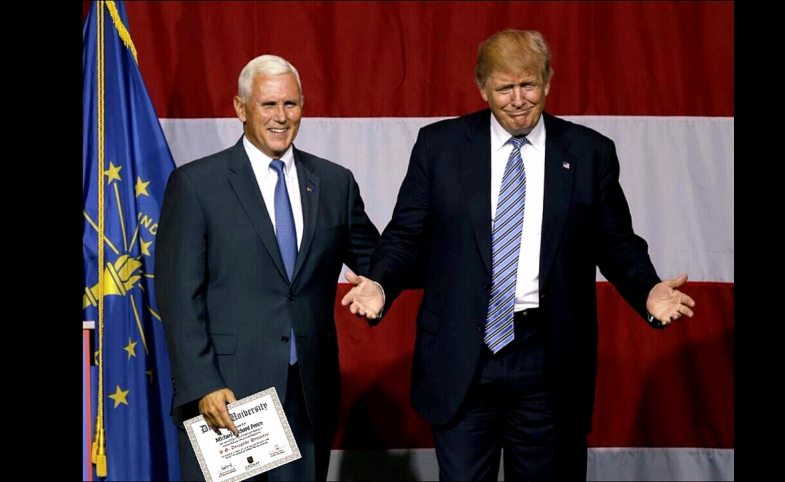 The Triumph of Fear

By this stage in a U.S. Presidential election year, the rest of the world understands that the United States is preparing to go to the polls. And, like Americans, people in other countries sometimes wonder whether the Republican and Democratic nominees offer — as Barry Goldwater put it in 1964 — “a choice, not an echo.”

No doubt about that this year.

In this election year, the rest of the world, particularly America’s traditional allies and partners, understands that the American voters have a choice — one that is particularly stark: a well-known Democrat who offers a continuation of Barack Obama’s center-left internationalist policies versus a controversial billionaire with isolationist tendencies and no political experience.

The world that looks at Hillary looks at someone they feel they know. Beloved or not, as Secretary of State, Clinton traveled nearly a million miles, visiting 112 countries in four years; as First Lady, she traveled to 82 countries in eight years. She may be the best-known American political figure never to have been President.

Donald J. Trump, in contrast, requires explanation and interpretation for a foreign audience. Before the start of this campaign, he was best known abroad as a TV celebrity and/or businessman, an image at odds with that of a typical politician.

Now, of course, following his declarations in this campaign regarding Mexicans, Chinese, and Muslims, he is also known as someone who has introduced inflammatory rhetoric disparaging a large portion of the world’s population.

During the last four months, as Trump was completing his conquest of the Republican Party in the United States, I was traveling in several countries in Europe — West and East — and met at conferences with participants from diverse countries around the world. As we lamented terrorist attacks, Brexit, an attempted coup d’état in Turkey, and doping scandals in olympic sports, people would ask, incredulously, “Does Trump have a chance?”

I had to admit that the answer was yes.

Should Trump be elected this November, the international order will face a degree of convulsion that will make Britain’s exit from the European Union pale in comparison. The coherence of the U.S.’ NATO obligations, our support for Ukraine’s struggle against Russian aggression, the precise nature of our anti-ISIS coalition, our bilateral relations with Mexico, nuclear non-proliferation, our support for the WTO and our NAFTA and TPP trade agreements — all these pillars of American foreign policy will be called into question.

Apart from the policies themselves, the most serious conclusion to draw from the Trump campaign re. foreign policy is his blithe lack of concern for public opinion outside the United States. In fact, he is using ignorance and fear about events and actors outside the United States as a way to motivate the American electorate. In this summer of dissatisfaction in Europe and elsewhere about terrorism, conflict and immigration, Trump is working hard to depict the world as a scarier place for Americans, a world where we are not being treated “fairly.”

Change the name of the aggrieved country, and this is the same playbook shared by strange political bedfellows around the world — from Boris Johnson to Vladimir Putin.

Should Trump be elected this November, the international order will face a degree of convulsion that will make Britain’s exit from the European Union pale in comparison.

The reliance on fear this year in political campaigns stands in sharp contrast to the 2008 Obama campaign’s mantra of “Hope.” Serious international implications for public and political communication can only follow.

Trump has already shown himself to be a savant in the art of political communication and theater, which may be changing the way a lot of practitioners of political PR look at their craft. When Ted Cruz thought he had stolen the show on Wednesday night, Trump entered the arena to draw the cameras off the stage. Even if he loses to Hillary Clinton, Donald Trump will be remembered for his ability to manipulate the public’s attention via social media and his blunt, jaw-dropping name-calling.

We may be living in an age in which the outlandish claim is remembered and the fact-checked data point is not. Trump’s opponents in the Republican primaries came too late to this understanding. Last week, as he flew into Cleveland in his logo’d 757, Trump buzzed over the feeble attempt by Ted Cruz to hold an outdoor rally, and then entered the convention arena to the theme music from the movie Air Force One.

American media appeared to be “hypnotized”:

TV News operations momentarily were distracted from non-stop coverage of the Melania Trump keynote speech plagiarism story by a huge bright shiny light in the sky outside the RNC convention hall this afternoon. It was Donald Trump, flying by on Trump plane, where he was deposited and met by Trump helicopter. Trump helicopter took the GOP presidential nominee to the convention center, where his running mate, Mike Pence, and his adult children waited to welcome him back after a one-day absence from the convention.

“We’re doing exactly what the Trump camp wants us to do – all eyes on Trump,” CNN’s Brooke Baldwin acknowledged.

Trump de-choppered as the theme song from the movie Air Force One swelled and the crowd of mostly New York delegates, applauded.

It was not by any means the first time that a political leader consciously exploited the imagery of the grandiose airborne arrival. (Think Leni Riefenstahl’s Triumph of the Will.)

“I am your voice,” Trump told his crowd on Thursday night.  “Only I can fix this.”

Americans and the on-looking world should recognize that this choice is also an echo.

How Donald Trump Is Making Us Insecure

Recent comments by Donald Trump in the New York Times should and will frighten Americans and our allies around the world. In response to questions about the North Atlantic Alliance (NATO) the Republican nominee...