Home|American Soft Power in the Age of Trump 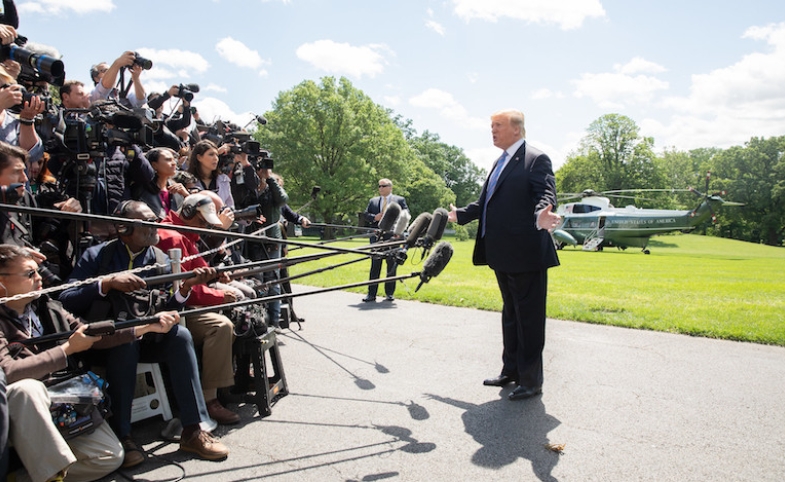 Note from the CPD Blog Manager: This article was originally published by Project Syndicate here and is re-posted with permission.

U.S. President Donald Trump’s administration has shown little interest in public diplomacy. And yet public diplomacy—a government’s efforts to communicate directly with other countries’ publics—is one of the key instruments policymakers use to generate soft power, and the current information revolution makes such instruments more important than ever.

Opinion polls and the Portland Soft Power 30 index show that American soft power has declined since the beginning of Trump’s term. Tweets can help to set the global agenda, but they do not produce soft power if they are not attractive to others.

Trump’s defenders reply that soft power—what happens in the minds of others—is irrelevant; only hard power, with its military and economic instruments, matters. In March 2017, Trump’s budget director, Mick Mulvaney, proclaimed a “hard power budget” that would have slashed funding for the State Department and the U.S. Agency for International Development by nearly 30 percent.

Fortunately, military leaders know better. In 2013, General James Mattis (later Trump’s first Secretary of Defense) warned Congress, “If you don’t fund the State Department fully, then I need to buy more ammunition ultimately.” As Henry Kissinger once pointed out, international order depends not only on the balance of hard power, but also on perceptions of legitimacy, which depends crucially on soft power.

Information revolutions always have profound socioeconomic and political consequences—witness the dramatic effects of Gutenberg’s printing press on Europe in the fifteenth and sixteenth centuries. One can date the current information revolution from the 1960s and the advent of “Moore’s Law”: the number of transistors on a computer chip doubles roughly every two years. As a result, computing power increased dramatically, and by the beginning of this century cost 0.1 percent of what it did in the early 1970s.

Given past experience, there is every reason to hope that the U.S. will recover its soft power after Trump, though a greater investment in public diplomacy would certainly help.

In 1993, there were about 50 websites in the world; by 2000, that number surpassed five million. Today, more than four billion people are online; that number is projected to grow to 5-6 billion people by 2020, and the “Internet of Things” will connect tens of billions of devices. Facebook has more users than the populations of China and the U.S. combined.

In such a world, the power to attract and persuade becomes increasingly important. But long gone are the days when public diplomacy was mainly conducted through radio and television broadcasting. Technological advances have led to a dramatic reduction in the cost of processing and transmitting information. The result is an explosion of information, which has produced a “paradox of plenty”: an abundance of information leads to scarcity of attention.

When the volume of information confronting people becomes overwhelming, it is hard to know what to focus on. Social media algorithms are designed to compete for attention. Reputation becomes even more important than in the past, and political struggles, informed by social and ideological affinities, often center on the creation and destruction of credibility. Social media can make false information look more credible if it comes from “friends.” As U.S. Special Counsel Robert Mueller’s report on Russian interference in the 2016 presidential election showed, this enabled Russia to weaponize American social media.

Reputation has always mattered in world politics, but credibility has become an even more important power resource. Information that appears to be propaganda may not only be scorned, but may also turn out to be counterproductive if it undermines a country’s reputation for credibility—and thus reduces its soft power. The most effective propaganda is not propaganda. It is a two-way dialogue among people.

Russia and China do not seem to comprehend this, and sometimes the United States fails to pass the test as well. During the Iraq War, for example, the treatment of prisoners at Abu Ghraib in a manner inconsistent with American values led to perceptions of hypocrisy that could not be reversed by broadcasting pictures of Muslims living well in America. Today, presidential “tweets” that prove to be demonstrably false undercut America’s credibility and reduce its soft power. The effectiveness of public diplomacy is measured by minds changed (as reflected in interviews or polls), not dollars spent or number of messages sent.

Domestic or foreign policies that appear hypocritical, arrogant, indifferent to others’ views, or based on a narrow conception of national interest can undermine soft power. For example, there was a steep decline in the attractiveness of the U.S. in opinion polls conducted after the invasion of Iraq in 2003. In the 1970s, many people around the world objected to the U.S. war in Vietnam, and America’s global standing reflected the unpopularity of that policy.

Skeptics argue that such cycles show that soft power does not matter much; countries cooperate out of self-interest. But this argument misses a crucial point: cooperation is a matter of degree, and the degree is affected by attraction or repulsion.

Fortunately, a country’s soft power depends not only on its official policies, but also on the attractiveness of its civil society. When protesters overseas were marching against the Vietnam War, they often sang “We Shall Overcome,” an anthem of the U.S. civil rights movement. Given past experience, there is every reason to hope that the U.S. will recover its soft power after Trump, though a greater investment in public diplomacy would certainly help.