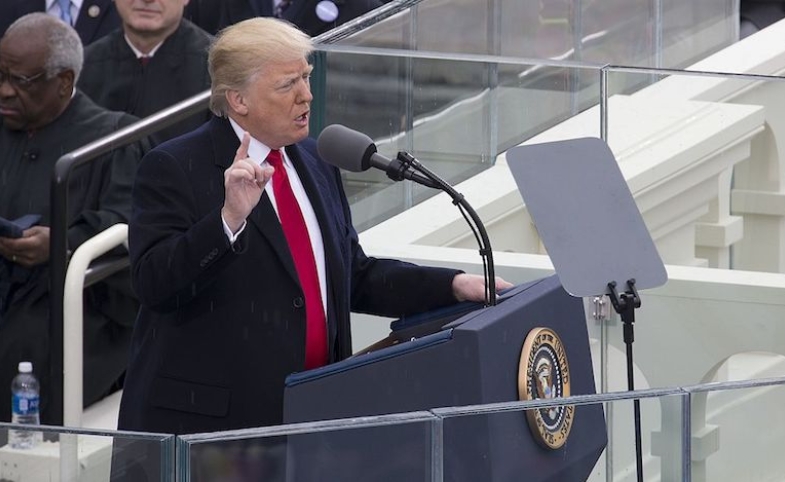 There has been much journalistic and scholarly commentary regarding Trump’s combative, antagonistic political style. However, much of this commentary refuses to seriously engage with this antagonism as a nuanced strategy, positioning it instead as simplistic manipulation of prejudices designed to take advantage of divisions within U.S. and international society. This two-part blog series uses a cultural studies approach to deconstruct Trump’s antagonistic public diplomacy and its ramifications for the evolution of U.S. soft power statecraft.

A fruitful place to start any analysis of presidential public diplomacy is with an exploration of the epitome of a public statement of intent: the inaugural address. Trump’s version excited much discussion of the “darkness of his rhetoric” and was described as “by turns bitter, blowhard, and banal” by the UK’s The Guardian newspaper. Many regarded it as particularly unusual for an inaugural address in its overt nationalist tones, which were bound to sit poorly with U.S. democrats and the majority of foreign leader powers. For us, one of the most striking features of the address, though, is the way in which it implicitly denies agency to those it explicitly promises to empower.

Throughout the speech, Trump uses language which positions the American people as both passive victims of the U.S. political elite but also passive receivers of his saving ministrations. So, after a long description of the various ways in which others have “ripped” the “wealth of the middle classes from their homes,” how “crime and gangs and drugs […] have stolen too many lives and robbed our country of so much unrealized potential,” what the audience is then presented with as a solution is the promise that all of this will be reversed by Trump, who promises, “I will fight for you with every breath in my body—and I will never let you down.” Although there is a great deal of “we” in the speech, it is predominantly used to position the new administration as doing things for the American people. Trump will restore what has been taken away and rebuild what has been torn down.

All this is well and good, perhaps, if [kayfabe] is kept in the realm of entertainment. But what happens when this populist strategy becomes a basis for public diplomacy?

Tellingly, the central image of the whole speech—the description of the situation of the American people as “American carnage”—also portrays citizens as the victims and takes its metaphorical imagery from the killing floor of animal husbandry. A little later in the speech, this is transformed into a more pastoral mode, as the president describes how his audience has no need for fear because “we are protected, and we will always be protected” by the military, law enforcement and God. Trump and the Trumpified state will act as shepherd to the passive mass of the American people.

Alongside this depiction of his audience as people who are always done to, both by the rapacious forces of elitism and by Trump himself, there is a further key motif that haunts the inaugural address. In the final minutes of the speech, Trump states that “in America, we understand that a nation is only living as long as it is striving.” To strive, of course, means to fight vigorously for or against something: to be in a state of strife. This constant state of antagonism is not something to be afraid of (at least, for U.S. citizens), for as Trump has reminded us, “we will always be protected.” Instead, it should typify the “heart and fight and spirit of America.” What curious dynamic, though, can encompass both a continuous state of national strife and the invocation of a passive, receptive mass of citizenry? The answer is the spectacle of wrestling, specifically the hyperreal simulation of kayfabe, a concept associated with the World Wrestling Entertainment (WWE) promotion.

Originating in the outsider language of carnival workers and hucksters as a signal to shut down insider conversations when outsiders (the “marks” or dupes) might overhear, kayfabe’s appropriation into the wrestling industry stems from a performance strategy which, in the words of Fiona A.E. McQuarrie, portrays “staged and ‘faked’ events as actual and spontaneous.” Everyone involved in the WWE promotion, from those inside the ring to the crew and fans outside it, behave as if the narratives of strife were real. Pre-match face-offs, off-arena outbursts and attacks, in-ring offenses, injuries and rivalries are all played out, and received, with the utmost immersion in the simulated reality. Yet, while this counterfeit strife serves as the apparent motivation for the entire spectacle, the actual objective is nothing other than the capturing and maintaining of attention. Indeed, in this way we can see that all “reality television” (including that of Trump’s own long apprenticeship) relies on the generation of kayfabe. The whole genre revolves around infinitely evolving, simulated strife.

All this is well and good, perhaps, if it is kept in the realm of entertainment. But what happens when this populist strategy becomes a basis for public diplomacy? As Adam Hodges has pointed out, Trump’s “America First” rallying slogan and xenophobic policy points are mirrored in the demonizing of the “foreign menace” in much WWE kayfabe. This is a hyperreality that Trump’s base understands and already is practiced in inhabiting—their willingness to suspend their disbelief for one entertainment narrative surely makes them all the more willing to respond to the same simulacra when presented in the arena of public diplomacy. But what makes “sense” for one audience cannot necessarily make sense for another. “America First” does not translate into the international political outcomes that Trump’s administration is seeking, or a coherent strategic narrative that can be used in international relations to bring U.S. allies together to resolve political issues. On the contrary, Trump’s disregard for U.S. allies and diplomatic conduct isolates political leaders and puts them in the position whereby diplomats are having to “work around” him.