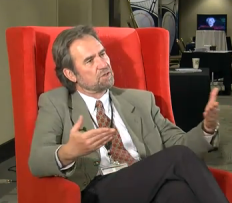 Daryl Copeland, Senior Fellow at the Canadian Global Affairs Institute, and Policy Fellow, Centre for International Studies and Research (CERIUM), University of Montreal, is an analyst, author, educator and consultant specializing in the relationship between science, technology, diplomacy, and international policy. His book, Guerrilla Diplomacy: Rethinking International Relations, was released in 2009 by Lynne Rienner Publishers and is cited as an essential reference by the editors of Oxford Bibliographies Online. A frequent public speaker, Mr. Copeland comments regularly for the national media on global issues and public management, and has written over 150 articles for the scholarly and popular press. His work has appeared in many anthologies, as well as in the International Journal, World Politics Review, Foreign Policy in Focus, The Hague Journal of Diplomacy, Place Branding and Public Diplomacy, The Globe and Mail, Toronto Star, Embassy, The Mark, iPolitics and elsewhere. He was awarded the 2010 Molot Prize for best article published in Canadian Foreign Policy (“Virtuality, Diplomacy and the Foreign Ministry”, 15:2).

From 1981 to 2011, Mr. Copeland served as a Canadian diplomat with postings in Thailand, Ethiopia, New Zealand and Malaysia. During the 1980s and 1990s, he was elected a record five times to the Executive Committee of the Professional Association of Foreign Service Officers. From 1996-99 he was National Program Director of the Canadian Institute of International Affairs in Toronto and Editor of Behind the Headlines, Canada's international affairs magazine. In 2000, he received the Canadian Foreign Service Officer Award for his "tireless dedication and unyielding commitment to advancing the interests of the diplomatic profession." Among his positions at the Department of Foreign Affairs and International Trade (DFAIT) in Ottawa, Mr. Copeland has worked as Senior Intelligence Analyst, South and Southeast Asia; Deputy Director for International Communications; Director for Southeast Asia; Senior Advisor, Public Diplomacy; Director of Strategic Communications Services; and, Senior Advisor, Strategic Policy and Planning. He was DFAIT representative to the Association of Professional Executives (APEX) 2001-06.

Further information on Daryl Copeland and his thinking on diplomacy, development and security in the age of globalization is available at: www.guerrilladiplomacy.com. Follow him on Twitter @Guerrilladiplo.