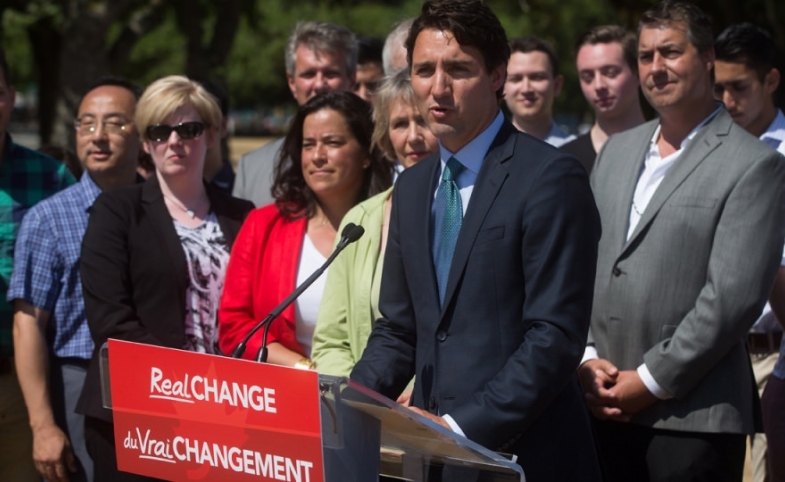 In conversation last week with members of the global elite at the World Economic Forum in Davos, Prime Minister Justin Trudeau again delivered the message that ‘Canada is back’ on the world stage.

Repeating that mantra may be good communications practice, but after a decade of foreign policy retrogression, the substantive case will be more difficult to make. The Canada to which he refers has been a long time gone.

In such circumstances, the effort to reconnect with this country’s storied internationalist past won’t be enough. But it might represent a useful point of departure.

Canada once contributed imaginatively, generously, and energetically to the construction of broadly-based international security and prosperity. That stature was not merely conjured by spin doctors. It was earned, grounded demonstrably in the diplomacy of the deed. Lester Pearson and Justin’s father Pierre Trudeau, for instance, are renowned for their commitment to development and peace.

From the mid-1980s to the early 1990s, under PM Brian Mulroney’s Conservative government, Canada brought home an acid rain treaty with the United States and the Montreal Protocol on Ozone Layer Depletion, played a central role in orchestrating the legendary 1992 Earth Summit in Rio de Janeiro (UNCED), and led the Commonwealth’s campaign against apartheid in South Africa.

The second half of the nineties featured the zenith of Canadian public diplomacy and soft power with Foreign Minister Lloyd Axworthy’s Human Security Agenda. Cleverly retrofitted by officials to appear rationally sequenced and coherent, this rapid-fire string of achievements – including the treaty banning land mines and initiatives on blood diamonds, small arms, children in conflict, the International Criminal Court and the Responsibility to Protect doctrine – was still impressive.

Although a break with the past was to be anticipated — the pace of Canada’s progressive international engagement had already slowed appreciably by the mid-2000s — it’s the past 10 years that have really spoiled Canada’s brand.

During the last two decades of the 20th century, even in the face of significant international policy resource reductions, Canada was able to make a difference. Can that leadership be restored?

Since 9/11, Canada’s record has been mixed. Under Liberal PMs Chretien and Martin, participation in the disastrous invasion of Iraq was avoided, but the ill-starred engagement in Afghanistan was embraced.

In 2003 Foreign Minister Bill Graham brought Canadians the innovative, interactive Foreign Policy Dialogue, using the Internet for the first time to ventilate and democratize the foreign policy development process. His successors, John Manley and Pierre Pettigrew — despite high expectations — delivered few new initiatives, although Pettigrew did sign off on the expansive International Policy Statement. There was much to admire in this innovative inter-departmental effort to integrate diplomacy, defense, commerce and development, but all traces of that epic undertaking disappeared with the election of the first Harper government in 2006.

Although a break with the past was to be anticipated — the pace of Canada’s progressive international engagement had already slowed appreciably by the mid-2000s — it’s the past 10 years that have really spoiled Canada’s brand. The one-time peacekeeper, honest broker, and helpful fixer came to be regarded as a liability — even a pariah, the country that others preferred to ignore.

On Harper’s watch the UN and its activities were devalued, ideology was substituted for science, diplomats and public servants were muzzled. The legacy of Foreign Ministers Peter Mackay, Maxime Bernier, David Emerson, Lawrence Canon, Jim Baird, and Rob Nicholson is faint. Even the otherwise admirable provision of increased assistance for maternal and child health was marred by its exclusion of support for family planning.

All of which is to say that restoring the country’s place in the world will take more than a good showing at the climate change talks in Paris, turning up at various other multilateral meetings (G20, Commonwealth, APEC), the resettlement of several thousand Syrian refugees and upbeat references to Canadian diversity and resourcefulness in Davos.

Canada is adrift, and has been for over a decade. Much has been lost, and not simply in terms of image and reputation. Years of accumulated cuts under both Conservative and Liberal governments, exacerbated by negligence and incompetence in the management of Canada’s international relation, have been costly.

On the other hand, the bar has been placed very low to the ground for the new government. If there is a readiness to reinvest in international policy institutions and to rebuild lost capacity, Justin Trudeau and Foreign Minister Stéphane Dion just may be able to transform adversity into opportunity.

The preconditions to improved performance will require more than symbolic gestures and media adulation. To reduce hierarchy, encourage innovation and sharpen effectiveness, some heavy lifting will be essential. This should include:

The continuing evolution away from state-centricity requires that diplomacy become more public, inclusive and participatory. Responding to that imperative is the sine qua non for bringing Canada back.

Trudeau has raised expectations. If he is to avoid plunging into the perilous “say-do gap,” immediate action is necessary.

Note from the CPD Blog Manager: This post originally appeared at iPolitics.

Andrew F. Cooper, a professor at the Balsillie School of International Affairs at the University of Waterloo in Ontario, Canada, has published a working paper with the East Asia Institute’s Middle Power Diplomacy Initiative...