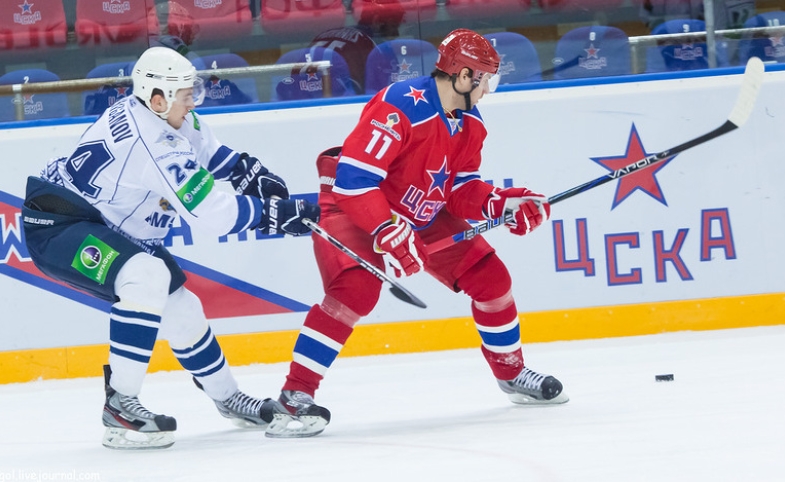 Bravely (or recklessly) writing these lines in Ottawa, I am running the risk of being ostracized by my Canadian hockey-loving colleagues and friends for as much as hinting any approval of the KHL—Russia-led Kontinental Hockey League (spelled with a K so as not to be confused with several existing CHL sports acronyms and to resemble its original Cyrillic spelling). Especially considering how many months these Senators-Canucks-Jets fans had to spend anxiously waiting for the recent lockout to end. Yet, the very fact that they know what KHL stands for goes to show that, since its launch in 2008, the league has done a laudable publicity job for itself and, arguably, for Russia in general.

This commentary should have probably started with a disclaimer: the author is not a hockey fan and has never followed the game closely, except for an occasional international match in which Russia played. And that’s if other channels had nothing better to offer. It is then quite telling that over the past several years even I have become aware of the KHL’s soaring reputation and influence in the international, and especially European, arena. It is safe to say that the KHL is one of modern Russia’s most successful soft power initiatives, even if it has not been consciously intended as one.

Framing the KHL’s expansion in terms of national foreign policy and interests is not a conspiracy theory. Unlike its North American counterpart, the Russian league’s leadership is part and parcel of the country’s powers that be. KHL Commissioner Alexander Medvedev is a Deputy Chairman of Gazprom’s Management Committee and Director General of Gazprom Export. The Russian Federation owns more than fifty percent of Gazprom, the world’s largest extractor of natural gas. Gazprom’s current Chairman of the Board of Directors, Viktor Zubkov, was Russia’s Prime Minister between 2007-2008. Meanwhile, Russia’s current Prime Minister, Dmitry Medvedev, held Gazprom’s Chairman post in 2000-2001 and 2002-2008.

The Head of the KHL’s Board of Trustees, Sergey Naryshkin, is also the Chairman of the State Duma, and reportedly met Vladimir Putin during while both attended the KGB school. Before assuming the administrative reigns of Russia’s legislative body, Mr. Naryshkin worked as chief of staff for President Medvedev from 2008 to 2011. Lastly, the Chairman of the KHL’s Board of Directors is Gennady Timchenko–multibillionaire owner of oil-trading giant Gunvor and “the invisible man in Russia’s ruling elite”.

If “soft power relies on positive attraction in the sense of ‘alluring,’” the KHL project is definitely one of Russia’s most alluring and positive efforts in the international realm.

The international community rarely views Russia’s geopolitical muscle flexing with approval or understanding, instead interpreting it as rudimentary imperialism. This sentiment is particularly strong among Russia’s neighbors in Eastern Europe and the Baltics, where sour memories of the shared Communist past have been turned into one of the main pillars of present-day nation-building. Yet when Russia comes with hockey sticks and pucks, Belarus, The Czech Republic, Kazakhstan, Latvia, Slovakia, and Ukraine do not mind. All these countries have KHL-participating teams; not to mention the dozens of Americans, Canadians, Finns, Swedes, and other foreigners playing or coaching in the league.

Where the KHL is not yet physically present, partnering television networks make it available in homes and public spaces: from major national sports channels to the leading international broadcasters such as, Eurosport, ESPN, and Viasat. I can personally attest to constantly spotting KHL broadcasts in various bars and cafes of Budapest, Hungary—the capital of a nation that can hardly be described as hockey-crazed.

For KHL bosses this seems to be just the beginning. As the International Ice Hockey Federation (IIHF) website puts it, “what Medvedev sees in the future is mind-boggling in size and scope, unlike anything anyone else could possibly conceive or comprehend.” According to Medvedev’s presentation last June at the IIHF’s Hockey Forum in Barcelona, the KHL’s commissioner envisions a pan-European championship of 64 club teams divided into Scandinavian and Central European sub-conferences. While this proposal is only one of several existing plans, every year of the KHL’s growth and development will make it increasingly difficult for the European hockey community to resist the influence of Russian hockey executives. With Milan’s Rossoblu on track to become the first Western team in the KHL, Medvedev’s plan is, effectively, already in motion.

Assessing direct results or determining causal relationships is the Achilles’ heel of nation branding and public diplomacy initiatives. Thus, I am far from claiming or even considering that KHL’s expansion would throw the participating countries into Russia’s economic, political, let alone military embrace. At the same time, if “soft power relies on positive attraction in the sense of ‘alluring,’” the KHL project is definitely one of Russia’s most alluring and positive efforts in the international realm. While it may not alter economic or political realities overnight, it makes Russia’s peaceful intrusion (in this case in the form of a state-backed organization), at the very least conceivable and tolerable, and often desirable.

However, to continue with the Trojan War metaphors, Putin’s regime’s full intertwinement with the KHL and its ambitious plans may eventually turn out to be an unwittingly self-planted Trojan Horse. If and/or when—itself a subject of a lengthy debate—the current regime changes, will the new ruling elite of Russia be equally enthusiastic about the soft power of this tough game?