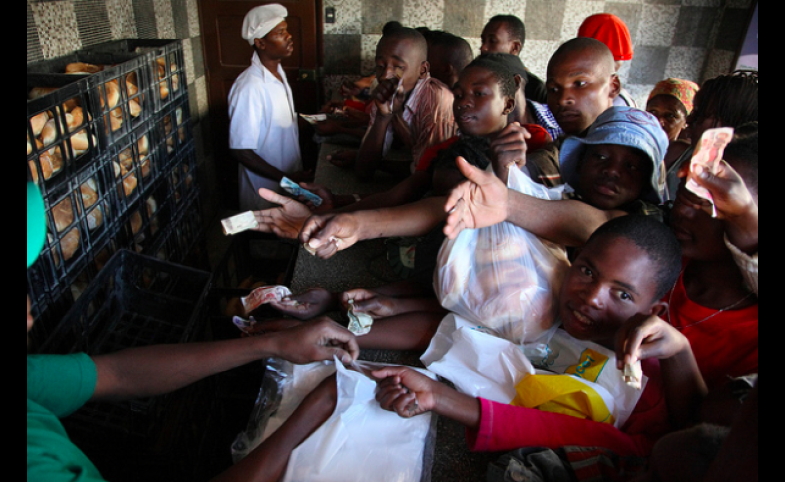 Turkey, as the natural heir of the Ottoman Empire, has inherited both a historical baggage and a legacy in North and Sub-Saharan Africa. Egypt, Libya, Tunisia, and Algeria were once Ottoman provinces, hence giving impetus to colonial perceptions in various factions of these societies. Sudan, Ethiopia, Eritrea, Djibouti, Somalia, parts of Niger, Chad, and Uganda were also under Ottoman rule. Unlike European colonialists, Ottomans do not have a history of abusing the resources of Sub-Saharan Africa. On the contrary, Turkey has supported the course of decolonization, giving way to a more favorable perception of modern day Turkey.

The early years of the Turkish Republic witnessed a setback in relations with Africa due to economic hardships, domestic and international security concerns, lack of human resources and capital. Nevertheless, the decolonization process of African nations converging with Turkey’s economic ambitions propelled the political and economic relations. Starting from the late 1970’s, government institutions provided humanitarian and development aid to Zimbabwe, Senegal, Sudan, and Ethiopia.

In the late 1990’s Turkey developed The African Action Plan to advance its relationship with Africa along the lines of a more dynamic and proactive foreign policy. However, for reasons pertaining to the lack of material resources it could not be fully actualized. As Turkey reached a certain level of political and economic maturity together with the already established active NGOs in the region; the 2005 Africa Opening became a staple of the new Turkish Foreign Policy initiatives.

The NGOs have been quite active in Africa, specifically Sub-Saharan Africa, even before 2005 engaging in various educational and humanitarian activities. TİKA (Turkish Cooperation and Coordination Agency) currently has offices in Ethiopia, Kenya, Libya, Egypt, Senegal, Somalia, Sudan, and Yemen. Besides, students from various African countries are invited to Turkey through state funded scholarships. 561 scholarships were offered to Sub-Saharan Africa. Additionally, Turkey provided training for over 200 junior diplomats.

Humanitarian Work in Africa by TİKA (2012) 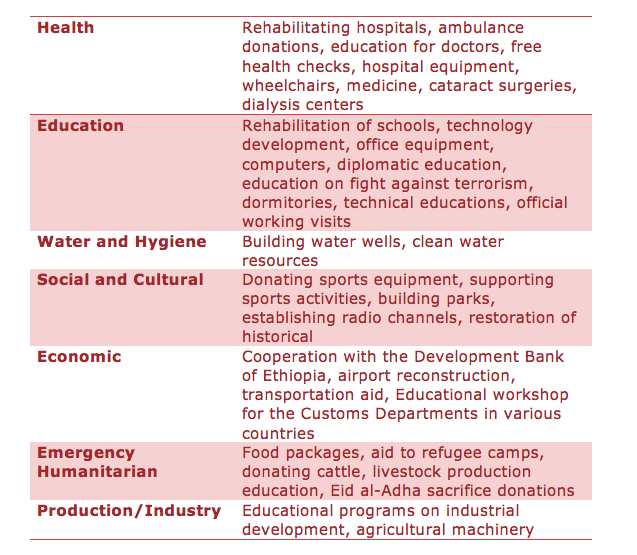 Humanitarian work in Africa by NGOs (2012)

The humanitarian work has had tremendous effect on trade volume, increasing the total amount of trade from around $7 billion to around $23 billion by 2012. Correspondingly, Turkish Airlines (THY) now flies to the following destinations in Africa: Algeria, Burkina Faso, Cameroon, Chad, Congo, Cote d’Ivoire, Djibouti, Egypt, Ethiopia, Gabon, Ghana, Kenya, Libya, Mauritania, Morocco, Niger, Nigeria, Rwanda, Senegal, Somalia, South Africa, Sudan, Tanzania, Tunisia, Uganda, and Zambia. With İstanbul as the connecting hub now more businesses can reach their destinations in Africa. Together with trade the number of embassies in Africa have increased from 12 in 2002 to 35 by 2013.

Turkey has also shown interest in state building and political affairs in recent years. Turkey’s humanitarian diplomacy in Sudan, Eritrea, Somalia, and Somaliland positions it between a traditional and non-traditional actor. In 2008 Turkey joined the African Development Bank Group as a non-regional member and held the Turkey-Africa Cooperation Summit in İstanbul with the next meeting scheduled to convene in 2014. Additionally, Turkey, in cooperation with the U.N. hosted the İstanbul Somalia Conference in 2010 and 2012. Turkey also hosted the Fourth United Nations Conference on the Least Developed Countries in 2011. In fact, P.M. Erdoğan’s official visit to Mogadishu has created what Ali (2011) has called the bandwagon effect attracting other leaders. Including a brave decision at the time to open an embassy in Mogadishu. Flourishing ties with Africa has helped the vote for Turkey’s UNGA Security Council temporary membership for the term 2009-2010 and is likely to be employed once more in Turkey’s bid for a new term.

2. The lack of a consistent, genuine interaction between the societies of Turkey and Africa.

3. Information deficit: Evaluation of Sub-African countries as a unison entity and one size fits all approach.

5. Falling into the trap of over-confidence.

6. Necessity to improve the quality of universities to sustain the attractiveness of the education system

7. Realistic evaluation of the capacity to act in terms of humanitarian diplomacy, trade volume and the amount of aid that can be offered on a yearly basis to avoid a say-do gap.

8. The absence of human resources that professionally know the region, languages and traditions.

9. Triggering colonial perceptions, the use of ideological narrative in North Africa; employing a dominant narrative in Sub-Saharan Africa.

10. The limited amount of experience in the Sub-Saharan region compared to traditional actors.

Turkey has been enjoying significant recognition of its soft power in Africa through humanitarian aid and development work. However, Turkey’s African initiative is fairly new and therefore requires an effective long–term strategy. A future commitment in the region is necessary in order to sustain the soft power effect.

While development organizations are restructuring and laying off, an alliance of public and private partners supporting immunization and vaccination of children in poor countries – known as Gavi – raised $7.5 billion...