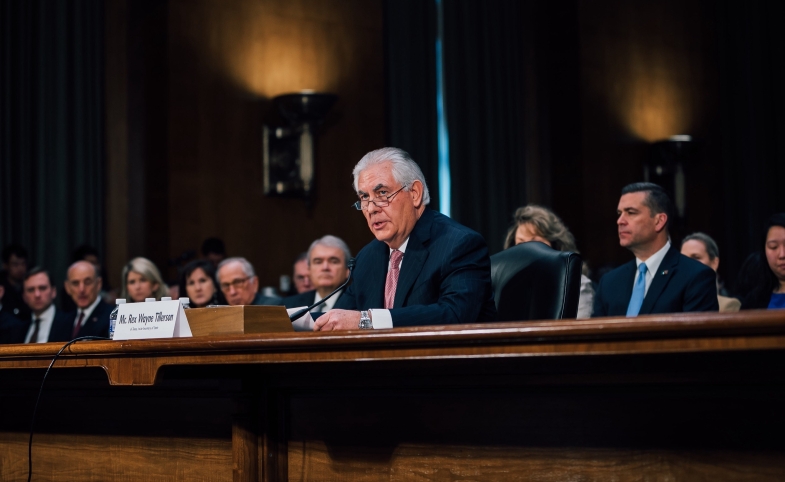 America’s New Face/s to the World

The United States has a new Secretary of State, former ExxonMobil CEO Rex Tillerson. The U.S. Senate confirmed Tillerson for the job on Wednesday by a vote of 56 to 43. Usually the opposition party endorses the President’s choice. In this case, however, most Democrats voted against Trump’s pick — which I suspect has as much to do with the President’s early actions in foreign affairs as it has to do with Tillerson’s qualifications to be Secretary of State.

True, Tillerson has no experience in government, nor is he someone who has written or spoken on foreign policy issues. Kerry, Clinton, Rice, Powell, Albright — you have to go back more than a hundred years of U.S. history to find a secretary of state who had no prior experience as a scholar, public policy intellectual, or government official.

America’s professional diplomats have every reason to try to help Tillerson succeed since they will need an influential Secretary of State to moderate the impulsive and uninformed moves of the Trump White House.

On the other hand, such was Tillerson’s role as head of the largest U.S.-based oil company, that he acquired a profound experience in those aspects of international relations that involve energy policy and the relations between states and energy corporations. No less a foreign policy expert than former Secretary of Defense Robert Gates recommended that Trump choose Tillerson.

What the contested Senate vote really shows is the breakdown of America’s foreign policy consensus, which is, in turn, leading to more crisis and testing of the new Administration in international affairs. As I write, Russian proxies in Donetsk have launched new attacks on Ukrainian forces, Iran has undertaken a new missile test, while hundreds of State Department officers have signed a dissent message challenging the new U.S. ban on refugees.

More than any other two individuals, Trump and Tillerson will be America’s face to the world. Will Tillerson be a bridge between Trump and the world? Will he moderate Trump’s erratic behavior and reassure America’s partners and allies? America’s professional diplomats have every reason to try to help Tillerson succeed since they will need an influential Secretary of State to moderate the impulsive and uninformed moves of the Trump White House.

Tom Countryman, the U.S. diplomat who was en route to an international meeting in Rome last week when the White House abruptly recalled him and removed him from his senior position, spoke Wednesday on CNN in support of America’s career diplomats. The question is whether anyone at the White House is listening.

These professionals need Tillerson just as Tillerson will need these professionals to conduct America’s foreign relations and to repair the damage done to relationships in the past several weeks. America’s newest face to the world will need to present a more reassuring diplomacy than that conducted most recently. In banning visas for all citizens of seven Muslim-majority countries, Trump played to the fears of his nativist political base. As the dissent memo signed by more than 900 State Department officers put it:

“When the 220 million citizens of these countries lose the opportunity to travel to the U.S. overnight, hostility towards the United States will grow. Instead of building bridges to these societies through formal outreach and exchanges and through informal people-to-people contact, we send the message that we consider all nationals of these countries to be an unacceptable security risk. Almost one-third of these countries’ combined populations are children under the age of 15; there is no question that their perception of the United States will be heavily colored by this ban. We are directly impacting the attitudes of current and future leaders in these societies — including those for whom this may be a tipping point towards radicalization.”

It is unlikely that the Trump White House will think in these terms, but it is essential that the other face of America — Tillerson — begin to.