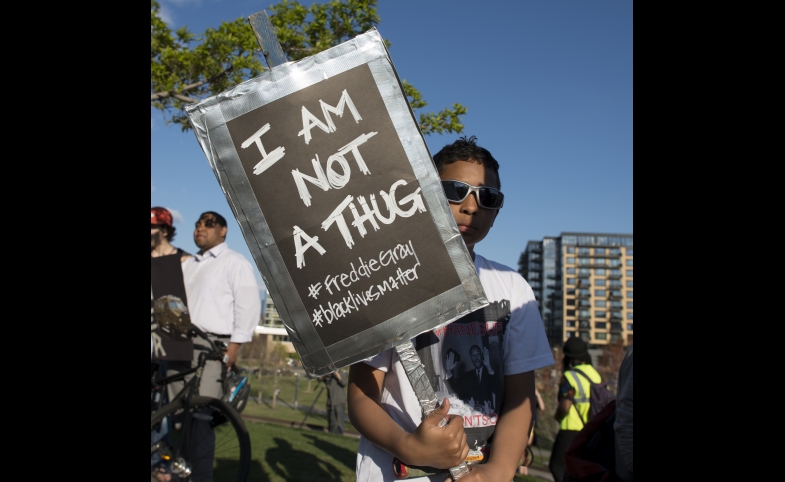 The recent unrest in Baltimore has impacts far beyond the United States. Reputation matters, and events like those that transpired in Baltimore are a proverbial black eye on the U.S.’s image. More specifically, the impact is on public diplomacy.

When the international reputation of the U.S. takes a hit, public diplomacy suffers as well. It’s harder to be taken seriously when, as a nation, we don’t treat our citizens equally. For example, it’s incredibly difficult to condemn civil rights abuses in China when Americans are taking to the streets to criticize their own government for its treatment of black Americans.

The LA Times provides a useful overview of the death of Freddie Gray, but as a summary: On April 12, 2015, Freddie Gray, a 25-year-old black man, was arrested by the Baltimore Police Department for possessing what the police alleged was an illegal switchblade (a fact that Maryland’s state attorney later disputed). While being transported in a police van, Gray fell into a coma and was taken to a trauma center where he succumbed to his injuries one week later. Following Gray’s funeral, protestors took to the streets. Violence soon erupted and riots overtook the city.

Recent developments are encouraging—such as the U.S. Department of Justice announcing a probe into suspected widespread civil rights abuses by Baltimore police—but the damage has already been done in terms of global image.

It’s not as if Gray’s death were the first. On the contrary, his death represents a tragic pattern. A tragic pattern that our international peers are quick to point out.

Why does the U.S.’ reaction to Gray’s death matter? Even the phrasing of that question hints at the answer: while we’re referencing a local, community-level event, the implications extend nationally. As protests turned violent and tensions escalated, the international community was closely watching the U.S. response.

Becoming habituated to domestic atrocities delegitimizes U.S. authority on issues of global civil and human rights and undermines U.S. public diplomacy efforts. To use a cliché, we can’t just talk the talk; we have to walk the walk too.

Image matters and goes a long way in establishing reputation. Reputation, perception, and image all work together and have a significant impact on public diplomacy. Why? Because public diplomacy is dependent on a certain level of trust, which is where the danger comes for the U.S. response to the unrest following Gray’s death.

As Allison Jackson of GlobalPost reported, “People around the world are watching Baltimore, just as they watched Ferguson in August, and the headlines in some countries are more damning than in others.” Jackson references Ferguson, where an unarmed black teen, Michael Brown, was fatally shot by a white police officer, but the comparison goes even farther back in history.

As Bethany Pullen describes in an earlier CPD Blog post, during the Cold War, America preached anti-communism and universal freedom abroad, while racial segregation laws were in full swing back home. The Soviet Union capitalized on this inconsistency and used propaganda to undermine U.S. public diplomacy efforts by portraying Americans as hypocrites who sought to dictate foreign affairs while being unable to manage their own problems.

The same accusations are flying now.

The U.S. State Department responded by funding international jazz tours with black icons like Dizzie Gillespie, Duke Ellington, and Louis Armstrong playing along with white musicians. While this did improve America’s image abroad, it didn’t reflect the realities of domestic race relations during that time. Even the best public diplomacy activities can only go so far in changing opinion when they’re battling a perceived hypocrisy.

Becoming habituated to domestic atrocities delegitimizes U.S. authority on issues of global civil and human rights and undermines U.S. public diplomacy efforts. To use a cliché, we can’t just talk the talk; we have to walk the walk too.

Let’s just let a few examples put forth by Allison Jackson of GlobalPost speak for themselves. Note that these are views from countries that the U.S. generally criticizes for various human rights abuses.

From Moscow-controlled Russia Today: The news group published a recording of an interview with Mark Mason, who describes himself as a U.S. domestic and foreign policy analyst “for the international news media.” In the more than 11-minute-long interview, Mason criticizes Baltimore authorities for their heavy-handed response to the rioters and claims the U.S. is a “police state” where “racist death squads” attack and kill black people.

From Venezuela’s state-run Agencia Venezolana de Noticias: A story with the headline "Racism: The systemic form of discrimination in the United States,” which accused President Barack Obama of “double standards” in his response to the Baltimore riots after he condemned the violence.

While these responses are rather hyperbolic, the sentiment is still relevant. There are a couple of arguments to be made for why public diplomacy matters in cases like this. The first is from the standpoint of formal, state-to-state diplomacy. Essentially, if we are perceived as holding different races to different standards, how are we to expect other countries to react when we criticize them for not treating all citizens as equals? The other argument is a more basic one, and one I believe is the most important: how are we to even be trusted?